For Samuel Madistin, a lawyer who has been on the front-lines of public advocacy in the face of the Martelly regime’s numerous attacks against human rights, press freedom, and democracy, his announced intention to run for President came as a surprise to many. Possibly aware of this, Madistin’s announcement came with a 944-word open letter to MOPOD that described his purpose and program for Haiti.

First Lady Manigat merely announced her intention to engage in the primaries and was light in outlining purpose, program, or ideology on Mar. 27, but said “MOPOD would not be about slogans but about real programs.”

Nonetheless, much of Manigat’s program can be guessed if she were to become President. With a long political presence on the national scene, enough is known about the 2010 presidential candidate who amassed the most votes in the first round of the 2010 elections, but was subsequently beat out in a 2011 run-off election mired in scandal due to international meddling, resulting in the lowest participation in Haitian history and the rise to power of Michel Martelly.

On Mar. 27, there was also a meeting of several dozen MOPOD members where the organization’s finalized emblem and commissions for mobilization were presented. As well, a commission for “MOPODiste” young revolutionaries was established with the purpose of civil service and outreach.

Former Sen. Turneb Delpé said the coalition’s emblem would be the colors of the popular sector – green, yellow and red – and would incorporate three heads to symbolize national unity.

Delpé warned, “up until now, this [coalition] is an alliance, not yet a fusion, but what makes this alliance differ from all others is that other alliances have been made on the basis of a simple program or people just looking to work together; this alliance is based on a shared ideology.”

First Lady Mirlande Manigat spoke in that same sense for the coalition’s members saying, “whether it is just us two [primary contestants Manigat and Madistin], or others may come, there won’t be fighting. There won’t be the pulling of revolvers, there won’t be ugly and dirty talk, because inside MOPOD, there is an engagement we have taken once and for all that once the choice is made, all will come together and back the person chosen by MOPOD.” 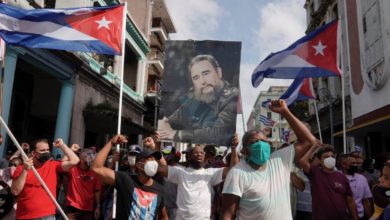