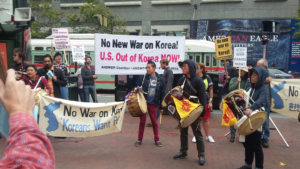 People from around the Bay Area gathered at Powell and Market St. in San Francisco on Aug. 15 to demand an end to the U.S. threats against the Democratic People’s Republic of Korea. Some had families in North and South Korea; some were military veterans; all called on the United States to stand down from its path of aggression, and to lift the criminal sanctions. North Korea remains the most demonized country in the U.S. mainstream media, yet in the wake of the white supremacist attacks in Charlottesville many were receptive to learning the hidden truth about the DPRK.

Speakers ranged from Korean activists, veterans, and organizers, all of whom were agitating against Trump’s dangerous war rhetoric calling for “fire and fury” against the socialist nation.

Christine Hong, associate professor at the UC Santa Cruz and the National Campaign to End the Korean War, said that  that “the Korean War doesn’t weigh on the American conscience the way Vietnam or Iraq do, but it should.” The current terrible crisis with North Korea is intimately tied to the destructive, asymmetrical war the U.S. waged more than 60 years ago. Hong explained: “An estimated 4 million Koreans were killed [in the Korean War], 70% of whom were civilians. More than 30% of North Korea’s entire population was lost in the carnage.”

Paul Liem, an executive board member of  the Korea Institute , emphasized the humanity of North Korea, and appealed to people to exercise their own conscience. “I’m Korean-American, born in this country. I have family in North Korea; I have family in South Korea. All these people I hold dear in my heart. [Starting a war] would be a stain upon the U.S. for generations to come. … and just because the president doesn’t have a conscience, doesn’t mean that you don’t.”

Anne Gamboni from the Party for Socialism and Liberation, had returned from a visit to North Korea just days before and described a place where people are working together to build a society that meets all people’s needs. She stated that North Koreans just want to be left alone to build their country and that the U.S. media tells us they have “crazy leadership,” yet the media never mentions that there are no homeless people in North Korea. Education is free, she pointed out, as is healthcare and housing.

Attendees held signs in support of the besieged nation: “From Korea to Venezuela: No to U.S. aggression,” “Stop Korean war games now!” and “USA hands off People’s Korea.”

Eugene Ruyle from the East Bay branch of Veterans for Peace stated that the South Korean government falls under military control by the United States during times of war, and that North Korea has put out many proposals for peace over the years, all of which have been rejected by the United States.

Tom Lacey from the SF chapter of the Peace and Freedom Party opposed a rekindling of war: “Most of us can remember the lead up to the invasion of Iraq in 2002 and when Colin Powell swore that WMDs were ready to be used [against the U.S.] by Saddam Hussein. This is definitely cause for alarm.”

Protestors also chanted: “Down with Imperialism!”, “No war against Korea! U.S. out!”, “Money for jobs and education, not for war and occupation!”

The rally culminated with a call for organized struggle at home by Gloria La Riva, an organizer for the ANSWER Coalition and the People’s Congress of Resistance. “This is all premised on a greater military budget, and we pay the price here at home: homelessness and joblessness.” La Riva stated, “We see tent cities with people who are freezing at night, who then find their meager belongings taken by the cops.”

The struggle against war with North Korea is connected to the struggle for survival here, La Riva explained. “We cannot have jobs at home with wars abroad. We have a duty to say ‘U.S. troops out of Korea’ and use that money here at home for child care, for people who need help, and for everyone who needs a decent life. We owe it to ourselves to learn the truth. To learn real facts, the reality that’s hidden from us by the U.S. media, Congress, Trump, and all those rich corporate heads who just want to make a killing of the world. Peace to the People of Korea, Cuba, Venezuela, the whole world, and to people here at home.”

La Riva concluded by calling on participants to join the People’s Congress of Resistance, September 16-17 in Washington DC.