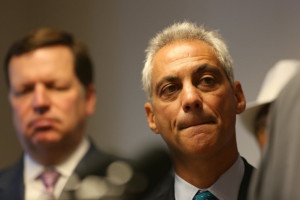 Chicago mayor Rahm Emanuel says he’s for a $13 an hour minimum wage that was recently proposed by a working group he put together. He even held a press conference with some alderman to say he supports the recommendation, which would raise the minimum wage to $13 an hour by 2018.

It is only words. Words of a proven anti-worker politician. How do I know it is just words?

Because it literally is just words. The minimum wage working group is advancing no law to make the proposal a reality. They have suggested that the city council should not act until two months after the November election. They have given the flimsy excuse that the state legislature should be given time to act first on the minimum wage. But what does this outrageous punt really mean? The mayor’s support of $13 an hour is election propaganda, plain and simple:

The city’s powerful low-wage employers and the anti-worker reactionaries have been given months to wage what will be a vicious campaign against raising the minimum wage while City Hall, without continued struggle by workers in the streets, will be silent or will back away from the proposal.

If I were an alderman, I would immediately help organize a protest for the next City Council meeting, demanding $15 an hour now. People need a living wage, not the election promises of some obscenely wealthy politician. In order to win, we must give no ground.

We should be levelheaded about the Mayor’s phony “support.” We’re talking about Rahm Emanuel here: the destroyer of public schools in Black and Latino neighborhoods, the guy who wants to kill the Chicago Teachers Union, the billionaire’s millionaire, the chief NAFTA strategist, a staunch advocate—along with his brother—of putting health care costs above patient treatment, the backer of Bush’s war on Iraq, the biggest bully in town and so much more.

Besides, we know how things work down at City Hall. The mayor is a virtual dictator and has more than enough power to pass even a $20 an hour minimum wage.

If City Hall was genuinely for a living wage, all they would have to do is mobilize tens of thousands of workers in the streets to outmaneuver the city’s business interests and pass the legislation. But that’s not what they do. They’re not part of the struggle. They are managers of the city in the service of the wealthy.

So, what is the significance of the proposal?

On one hand, it is remarkable that a task force of Mayor Rahm Emanuel, a truly arrogant 1 percenter, even put the words “$13 an hour minimum wage” in print. That astonishing fact is directly attributable to the struggle of low-wage workers and the Fight for $15. A raise of over a dollar an hour every year for the next four years, for a low-wage worker, would be no small victory, especially in a time period in which reactionary anti-labor sentiment is so dominant.

The best chance to get $15 an hour, or more, or the best deal that is possible, is to escalate the struggle now. Not after the election. Not in six months from now. The bosses, with all their resources have already gone to war against the proposal. It would be a major mistake to give them the playing field for the next six months.

In fact, the city’s plutocrats who are directly responsible for poverty in society understand what the working group’s proposal is all about. That’s why they are throwing millions of dollars into the mayor’s reelection campaign even though he has positioned himself as being for a minimum wage hike that they cannot be happy about.

The working group’s proposal and their election cycle punt will give the pro-business interests more than enough time, especially if the unions shift focus away from a street struggle to win a living wage, to get machine candidates elected, to batter and bludgeon the proposal.

Again, in order to win $15 an hour we need to escalate the street battles for $15 now. We need to draw the line and raise up the banners of a living wage during the election cycle.

I’m running for alderman in the 49th Ward. The alderman I am running against, Joe Moore, was on the mayor’s task force and is also guilty of punting to the city’s plutocracy. If you want a Chicago that belongs to all of us instead of the obscenely wealthy, you can and should join my campaign by clicking here.