Miami marches amid the danger of climate change 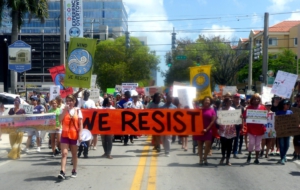 On the afternoon of April 29, the residents of Miami and Broward County headed over to José Martí Park for music, discussions and sign making. From the park, they participated in a march that crossed the Miami River and ended at the Historic Lyric Theater.

Various organizations set up at the park were eager to spread awareness about the relationship of climate change to capitalism and how they are affecting the county. One of these organizations was the Urban Paradise Guild led by President Sam Vandeer.

“The Urban Paradise Guild and our march today is for anyone who opposes Big Oil and wants to push for a world with renewable, green energy,” Vandeer told Liberation News. The group brought a giant oil snake puppet that was a center of family-friendly fun during the march.

Liberation also spotted a group of Miami Haitians proudly waving the Haitian flag and talking to people that passed by. Due to a history of segregation, most Black neighborhoods in Miami-Dade are situated on higher ground. Rising sea levels threaten to exacerbate a gentrification process that is already underway in neighborhoods like Little Haiti, as developers look inward for new projects that threaten the working class Black community.

“These past few years we’ve fought to define the boundaries of Little Haiti as an official city neighborhood so that the people who live there aren’t invisible,” said Marlein Bastien, the founder of Haitian Women of Miami. Bastion fears that if less of the neighborhood is officially named Little Haiti on government maps, it will be easier to displace the Haitian immigrants who settled there and built it from the ground up.

The capitalist government and its destabilizing policies have riled up the people of Miami. President Trump’s proposed budget plan includes eliminating the majority of the already feeble government funding for climate change programs. It includes a 31 percent slash on the Environmental Protection Agency’s budget as well as a reversal of Obama era programs such as power plant regulations, scientific research and international climate projects.

These cuts will amount to about 100 million dollars funneled into an already massive military-industrial complex.

The people of Miami-Dade County cannot stand these attacks as rising sea levels threaten to penetrate the city’s aquifers with salt water, exacerbate the gentrification of historic Black communities and possibly create a refugee crisis that would number 2.5 million people.

It is time for the people of Miami to rise up and demand a better world!