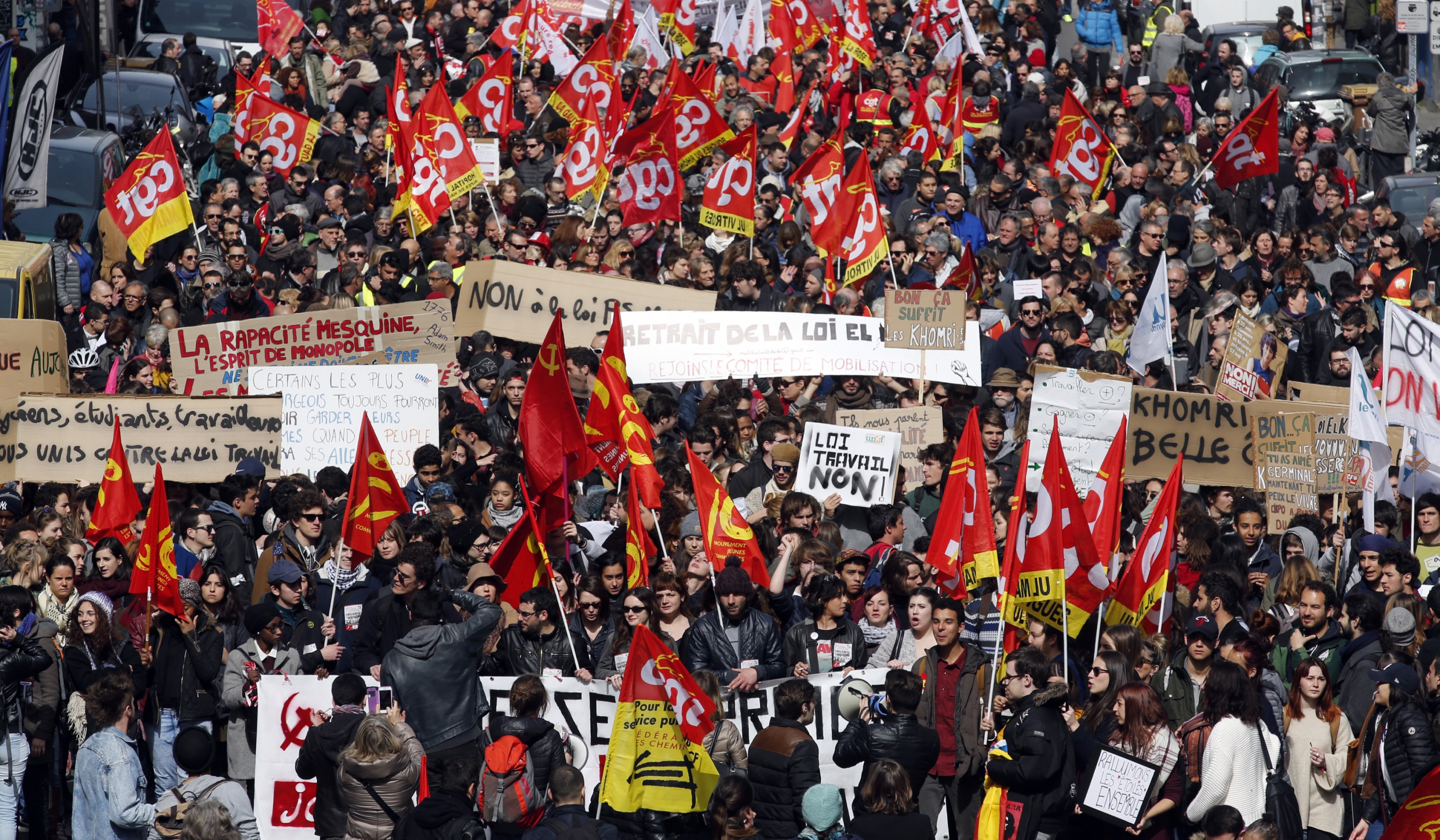 In France, over a million people have come out to protest against a new anti-worker law and were violently confronted by the police with dozens of people injured and many more arrested. The new law is referred to by the name of the Minister of Labour Myriam El Khomri, and was first presented by her in February.

The El Khomri legislation was introduced in its original French as the “draft legislation aimed at implementing new freedoms and protections for businesses and workers.” To refer to this law as a new freedom or protection for workers is laughable, and is really a kick in the face to French workers. What the law really does is expand protections and freedoms for the wealthy elite and no one else.

The El Khomri law is an injustice designed to reverse all the rights fought for by workers. French president Francoise Hollande claims that the reform will help create more jobs in an ailing economy. However, this is more of the same rhetoric that promotes “structural reforms” as necessity even though these reforms would only create more poverty and inequality. The French movement is representative of an international struggle against austerity. Workers everywhere from Mexico and Greece to France are all fighting back against the attack.

The French labor reform bill is giving businesses more freedom which could result in increased hours but reduced pay, and more layoffs. It also reduces special leaves and vacation to be negotiated on the employer’s terms. The reform would especially affect the youth of France as it allows employers to fire employees under the age of 26 without cause. Because of this the youth of France have a large presence in the movement. This reform bill, if not defeated, will deprive them of their future. Protesters recognize that the labor reform bill is pro-business and erases workers’ rights.

The protests began on March 9 with the social movement being called “Nuit debut,” translated roughly as “standing up all night.” The movement is primarily led by leftist forces and union members and has been compared to both the U.S. Occupy Wall Street and Spain’s 15-M movement. Workers are unwilling to be punished in the name of austerity, which is a crisis created by capitalism. Similarly in July 2015, Greek workers were involved in mass protests and general strikes to oppose austerity policies that were being enforced, and in Oaxaca, Mexico, teachers have paid with their lives fighting against an education reform bill.

The French ruling class is trying to enforce capitalism through the police baton in order to create cheap labor. The El Khomri bill essentially boils down to stripping workers of their rights and making them more vulnerable to exploitation. The French labor reform is outrageous for a country struggling with a high unemployment rate of 10 percent and a stagnant economy.

Although the movement is centered primarily around the labor reform bill, there are much broader concerns involved, such as: universal basic income, opposition to the Transatlantic Trade and Investment Partnership (TTIP), amnesty for undocumented workers, solidarity with refugees, and the gender pay gap. France’s mobilized collective are on a progressive mission to create another world to realize social justice and demand dignity for all workers.

President Hollande and Prime Minister Manual Valls say they will not budge to the millions of protesters who disapprove of the law. Since the French protests began attempts have been made to hinder their cause. Every measure to dismiss the protesters has been attempted; everything from police teargas to the Prime Minister Valls portraying protestors as “rioters” and “ultra-violent youths.” French Interior Minister Bernard Cazeneuve had the gall to tell protesters “to find within themselves a little humanity, tolerance and respect. “

Even the police have tried to garner sympathy away from protesters by claiming they were too “exhausted” to deal with demonstrations. French leaders have threatened a ban on demonstrations. Valls even claimed that the protesters were out “to kill a police officer.” The threatened ban by the French government on trade unions’ demonstration was reverted on June 22 after falling under harsh criticism and backlash.

The protesters in Paris represent all working class people united, mobilized, and resisting capitalist greed. Police involved in both these mobilizations are violently fighting against the working class and protecting the interests of the ruling class. As the police and the French government continue to hinder this important movement’s progress, the people continue heroically to rise up.