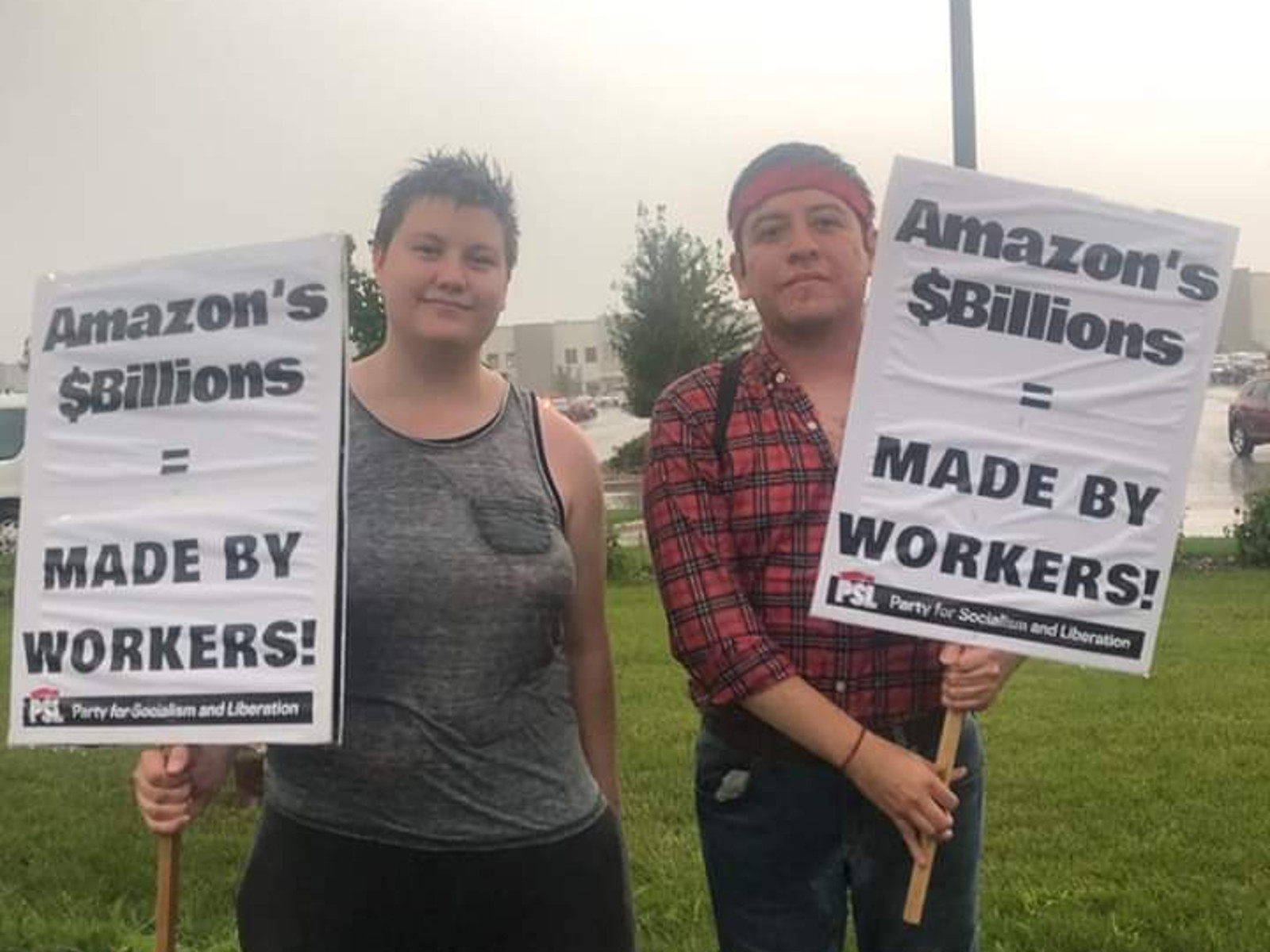 On July 15, workers from the Amazon Fulfillment Center in Shakopee, Minnesota began a strike against the company on its most important day: Prime Day, which offers many deals, discounts, and promotions for Amazon Prime members. The striking Amazon workers were joined by community members from around the Twin Cities including union workers from Teamsters, SEIU, UFCW, and ATU and elected officials, community organizations and individuals. Others present included a pilot who flies planes contracted by Amazon who with other pilots joined the strike, and some Amazon workers from Seattle who read statements of solidarity. Members of Party for Socialism and Liberation joined the picket line as well in solidarity.

Prior to July 15, the strike had generated a lot of attention on social media with hashtags like #PrimeDayStrike and #AmazonBoycott trending on sites like Twitter. Many people pledged not cross the digital picket line by not ordering from Amazon during Prime Day, despite the enticing deals. Some even went as far as cancelling their entire Amazon membership. Many more encouraged their friends and communities online to not buy from Amazon, or its affiliates like Whole Foods and Twitch on July 15, in support of the workers.

The strike was organized by workers in conjunction with Awood Center, a community organization aiming to build power in the large East African community in the Twin Cities. East Africans make up large number of the 1500 workers at the Shakopee Fulfillment Center. The Twin Cities is home to one of the largest populations of East Africans, especially Somalis, in the United States as refugees as a result of instability there. This instability is due in part to U.S. and Western interventions and policies, as well as past colonial legacies like that of Italy’s colonial presence in Somalia, Ethiopia and Eritrea.

Speakers, many of them Amazon workers, gave their testimony of the mistreatment they faced as East African and Muslim workers in the warehouse. One worker remarked that in the whole of the large warehouse, Muslim workers were only given a small space in a doorway to pray. They followed up by highlighting the billions of dollars the workers make for Amazon, while Amazon makes no effort to meet the needs of its Muslim workers. They concluded by stating that there are companies much smaller and with less capital that make more genuine accommodations than Amazon does, and cannot believe that Amazon would cast them to the doorway to pray with the type of money at the company’s disposal.

Another worker remarked that they only receive 30 minute breaks and are expected to continue working, and too much relaxation during a break is counted against them to which they remarked, “I don’t know any other company that counts breaks against you.” A different worker pointed out the small number of workers that joined the strike, which was just a few dozen. They stated that at the entrance of the warehouse, Amazon had posted police officers to intimidate workers into not joining the strike. While some outlets highlight the small number of Amazon workers joining the strike, they neglect to highlight this key point.

The theme at the rally and the strike was “We Are Not Robots” which was printed on several t-shirts worn by striking workers. Amazon workers made it clear that they felt dehumanized and neglected by the company. A worker who spoke had suffered an injury to the left foot, but was denied worker’s compensation. Now that injury has resulted in the inability to work as much as Amazon expects. Amazon treats its workers like robots, and they receive no protection from harm and dehumanization.

These stories from workers are in line with their demands: respect, safer working conditions, and reasonable expectations.

The strike began on the picket line with chants like “They work, they sweat, Amazon workers need a rest,” and “Amazon hear our voice.” Trucks transporting Prime Day shipments were stopped at the exit by the picketers, prompting drivers to talk with organizers on why they couldn’t be let past. Many trucks turned back in solidarity with the strike, but some were let through, albeit after being delayed for upwards of 15 minutes. Angry employees trying to leave or enter the warehouse attempted to break the picket line or plead with nearby police officers to let them in, but the workers held their line.

As the hours drew on, a strong storm moved in on the area, but the downpour did not disband the picket line and they continued to hold the line even in the inclement conditions. It was only after a flood warning was issued that the organizers decided to end the picket for the safety of all in attendance. At its conclusion, there was a sense of satisfaction among the nearly 100 workers and community members joined in solidarity, and that this would not be the end of the struggle against Amazon in Shakopee or the world. Minnesota has a rich history in the labor movement, and it continues with these brave workers in an unprecedented work stoppage on Amazon’s most important day.