Several protests in southwest Florida were among the national and international mass outpourings Saturday in support for students protesting the epidemic of gun violence in the United States following the most recent mass shooting in a Parkland, Florida high school.

Liberation News was there at the demonstration in Sarasota at the “Kissing Statue, ” which was variously estimated as between 6,000 by police and 20,000 by one of the organizers, but in any event was one of the largest in this city and was noticeably inter-generational. The speakers were mostly students of course, but as Sarasota is heavily populated by retirees, the students were strongly supported by those of their parents’ and grandparents’ ages. One such was author Sean Colson, a self-styled “peace pusher” who was there because he is “against all the crazy out of control violence in the United States.”

Michelle Lipman, a mental health professional carrying a sign protesting the ease of buying politicians, declared she was “sick and tired of no change when all that is needed is common sense.” Michelle advocates for requiring licensing for weapons similar to that required for driving a car.

Teen and first-time protester Lauren Wood, a senior at Lakewood Ranch High School, said she became passionate since Parkland and came to speak out as one of the voices rallying for change, especially for regulating semi-automatic and automatic weaponry.

One student at the University of New Mexico was in her hometown of Sarasota to help her mom pack for a move. She came to show support for the students but commented that “it is very difficult to see this government carrying out programs of gun reform, considering that this country was built on violence against Black and Native peoples and is constantly at war.” Among other ideas, she proposed ending the militarization of police and stopping violence in general.

Quite a number of people came with and because of their small children. Rebecca Siff brought 7-month-old Sterling with a sign warning all parties that the baby would be voting in August 2035. 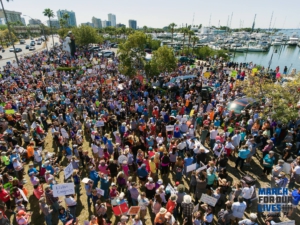 Erika Dahl of Sarasota came to the demonstration with her 2-year-old because she does not believe guns belong in schools and that the NRA has too many hands in the government. She proposes more education for everyone, including safe gun use and more safe places for youngsters and the mentally ill. She opposes removing benefits. As a teacher out on maternity leave, she complained that teachers and administrators have their hands tied by bureaucracy and that high risk, potentially violent students need support in time to make a difference, not militarization of schools.