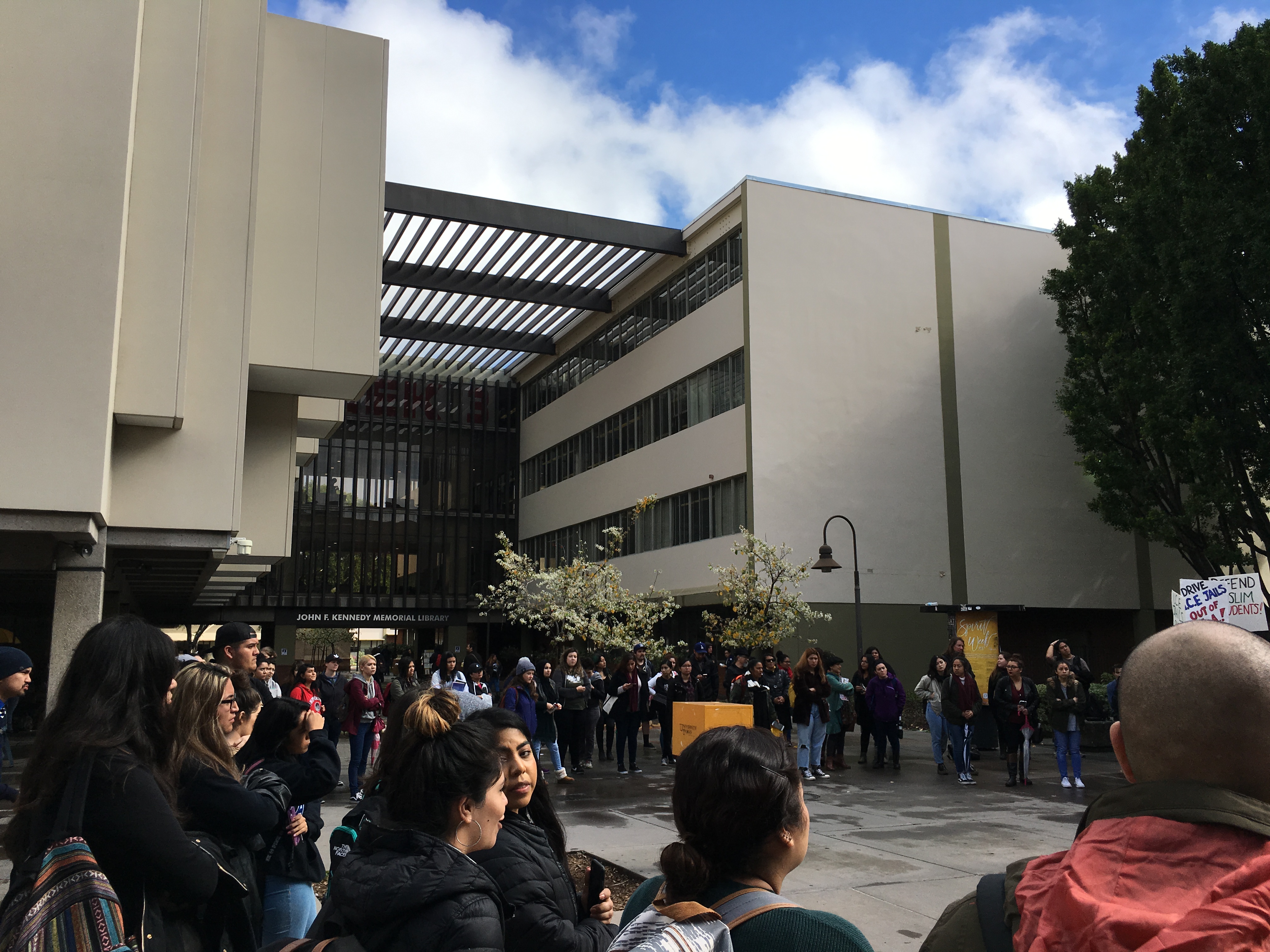 On February 7, students at California State University Los Angeles walked out of class and gathered outside after a rainy morning to rally and share ideas. As in many campuses across the United States, these students bravely rose up to stand for those whose lives and well-being are being threatened by the Trump government. This walkout in particular aimed to do its part in the resistance against the infamous travel ban which restricting immigration predominately from Muslim countries.

The ban fulfills one of Trump’s many campaign promises, in the same league as his promise for a wall on the U.S.-Mexican border: ham-fistedly racist and xenophobic, even compared with other items on the Trump platform. The ban, Trump’s vitriolic bigotry and his outrageous nominees and appointments have earned him protest across the United States and even internationally.

The same anger and fear felt around the world was felt at CSU LA. “It’s important for us as young people and as advocates for the people who are not here today to be a part of this,” said Jazmine Garner, a student at CSU LA. Garner, herself a Black Muslim, hoped that she could bring her perspective in opposition to the racist, stereotyped narrative being spread by the Trump government about Muslims worldwide.

The campus has one of the most multi-national student bodies in the United States, which was especially clear from the makeup of the students who walked out. As Cynthia Garcia put it, “I love unity… It doesn’t matter what color you are, I’m going to be there for you… I don’t think it’s right about what the president is saying—categorizing and stereotyping Mexicans as being all criminals, all drug dealers. I wasn’t brought up with any of that, and I don’t believe that ‘all Muslims are terrorists.’” Garcia’s entire Chicano studies class participated in the walkout. She added that many terrorist attacks, such as the Charleston massacre, “had nothing to do with the Muslim [community], so I believe that the government right now… is stereotyping and dehumanizing people and their religions if they are not white.”

Students speaking voiced calls for continued bravery, vigilance and action, which were met with nods and applause from other students, faculty and community members in attendance. It was clear both in the mood and the speeches that the walkout fit comfortably in the swelling tide of resistance against Trump. As a result, many students felt the same need for fundamental social
change as the protesters who shut down airports across the United States, who arrived at Trump’s inauguration in greater numbers than his supporters and who are swelling the ranks of the women’s movement.

“I was walking to class and I saw the fires of the revolution, and I wanted to get a piece of the heat,” said Jazz Brooks. Brooks added, “It’s all part of a process, building up the bonds of solidarity and having a more organized group of people that are politically active.”