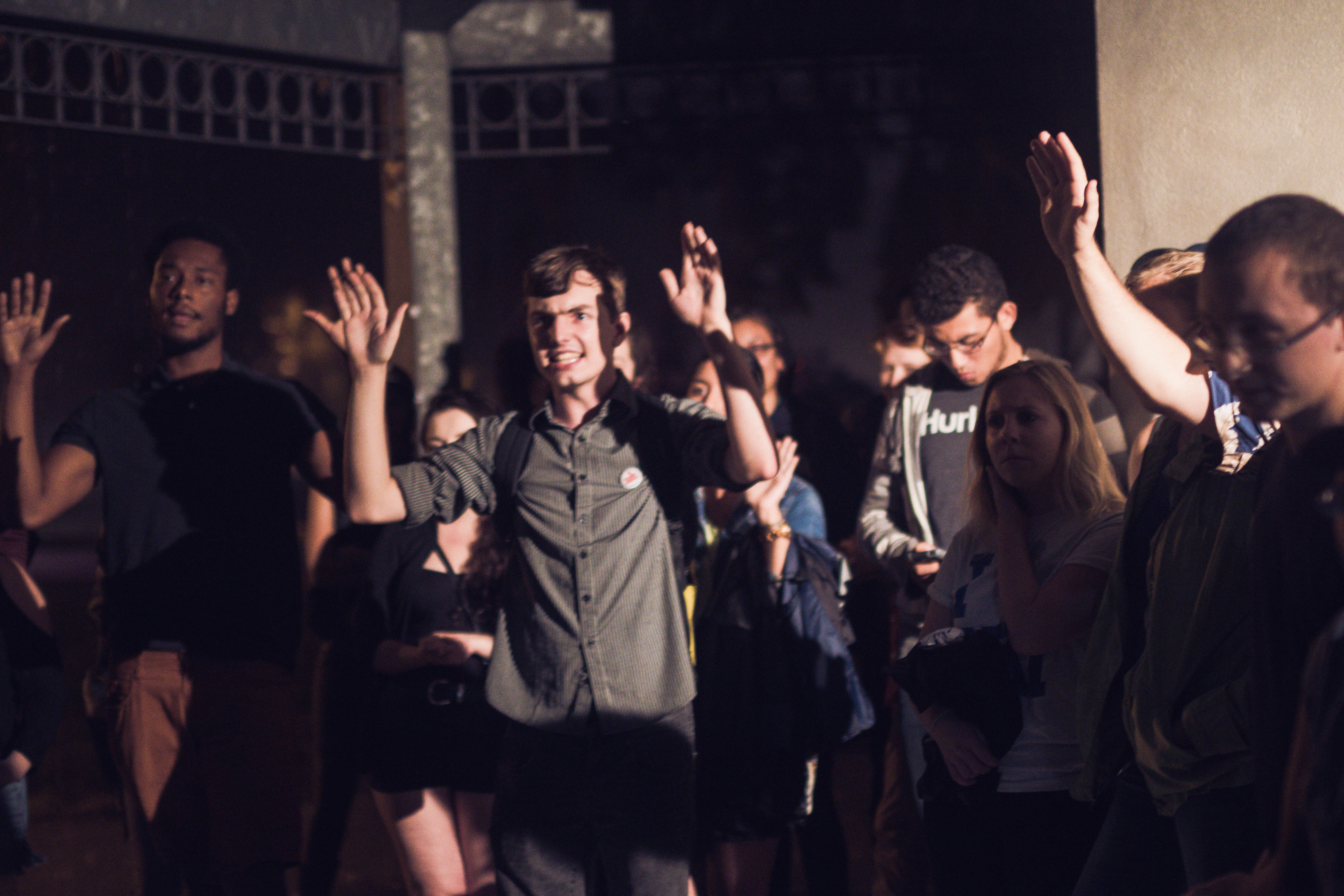 On November 25, the people of Bradenton and Sarasota rallied at Dr. Martin Luther King Jr. Park in Newtown after the non-indictment of killer cop Darren Wilson. Gathered under a gazebo during a torrential rain, 50 New College students and community members spoke out against police brutality and racism, as well as the brutal, unconstitutional repression of peaceful protests in Ferguson.

Standing in a circle illuminated by the floodlights of local reporters, activists chanted “Indict! Convict! Send that killer cop to jail! The whole damn system is guilty as hell!” “Hands up! Don’t shoot!” and “J! U-S! J-U-S-T-I-C-E is what we want for Eli, Brown and Rodney!” They also listened solemnly to the words of Natasha Clemons and Omega Velez, two women demanding justice for their sons whose lives were taken by police brutality. “My son’s blood is your blood,” said Ms. Clemons.

“The most important part was showing the community we’re all standing together against this,” said Angelica. “I thought it was really powerful to have people from the area who have also been affected. You know, you hear about it, but to see the mother of somebody’s whose child was also slain in this manner, was really impactful.”

The killing of Mike Brown in Ferguson, part of a nationwide, never-ending war waged against people of color by police and the criminal “justice” system, has sparked many protests in the highly segregated cities of Sarasota and Bradenton, where families have lost children of their own.

In 2012, Sarasota County Sheriff’s Office pulled over Ms. Clemons’ son Rodney Mitchell for an alleged seat belt violation, then fired multiple times into the unarmed youth’s car almost instantly. Ever since, Ms. Clemons has campaigned nonstop for Rodney. In October, the National Bar Association, the oldest and largest association of Black lawyers and judges in the U.S., made a significant visit to Newtown in Sarasota to show support for Ms. Clemons and her family.

In January, Manatee County Sheriff’s Office chased down Ms. Velez’ son Elias Guadarrama, cornering him behind a duplex and ordering all bystanders inside their homes. After shooting Elias in the head, cops claimed that he committed suicide. Ms. Velez and everyone else who knew Elias insists that is impossible. An independent investigation has also confirmed that the shooting was not a suicide.

Because of what happened to Rodney Mitchell and Elias Guadarrama, as well as other local youths, the national movement that emerged from the killing of Trayvon Martin and gained new militancy with the uprising in Ferguson is likely to keep reverberating in the relatively small cities of Sarasota and Bradenton.

“Ferguson is a consequence of hundreds of years of oppression,” Victoria Jara, a New College student studying biological psychology, told Liberation. “The uprising is about how the justice system doesn’t serve those people the system doesn’t cater to.”

“It makes me feel like America has really lost touch with what the people actually want, other than a select few,” said Rachel Siewak, a Bradenton resident who works at Carrabas. “That makes me really mad. It made me feel like if I could do something at all, I had to go out and support people who feel the same way that I do about it.”