A group of activists marched through downtown Nashville, Tennessee on June 23 to demand an end to the incarceration of immigrant families. They also demanded that Nashville Mayor David Briley and Davidson County Sheriff Daron Hall cut their ties with ICE and CoreCivic. People walked and shouted from Snodgrass Tennessee Towers to Hill Detention Center, sometimes interrupting traffic, to make their demands known. They marched past the Pride festival taking place downtown where many cheered the protesters on. The activists also found a great deal of support from pedestrians and honks from passing vehicles.

CoreCivic, the largest owner and operator of private prisons in America, is based in Nashville. The company currently owns eight immigration detention centers throughout the country. Though the company claims not to house children who are not under the supervision of a parent, the protesters were dissatisfied with these claims and called for the dismantling of CoreCivic and ICE. They also demanded an end to racial profiling and incarcerating immigrant families in Nashville and throughout the country.

Some undocumented immigrants are currently being held in Hill Detention Center, which is why the protesters chose this location as a part of their demonstration. The building was guarded by three officers when the group arrived. The protesters stood in front of the facility on the opposite side of the street and demonstrated.

Sekou Franklin, a member of Democracy Nashville and Community Oversight Now, spoke before the group about the slave market racism that is currently being directed towards immigrants in this country. He explained that people are being exploited for their labor and victimized by systemic racism. He likened the current socioeconomic atmosphere in the U.S. to that of the Antebellum South when Black slave families were separated and used for similar reasons to stress the point that economic exploitation is at the root of both social ills. He urged everyone gathered to create community coalitions that can police themselves along with solidarity against the continued weaponization and militarization of the police.

Albert Bender, an activist with the Native American Coalition, spoke next. He stated that the Trump administration’s immigration policies amount to little more than a war against Indigenous people. He noted that most of the deported and incarcerated undocumented immigrants in America are of Indigenous Latin American descent. He demanded an end to the Trump administration and stated: “No one is illegal on stolen land!”

The demonstraters then shouted to end the racist, capitalist system. There were also calls to organize workers and communities so to unite all people, no matter their nationality or immigration status, to fight the current unjust system. Suggestions were also made that those gathered begin to visit the incarcerated if they have not already done so. They then ended the protest by handing the officers across the street letters with their demands written out in the hopes that they with be passed along to Sheriff Hall. The group hopes that Mayor Briley will follow Atlanta Mayor Keisha Lance Bottom’s example by ending the city’s detention of ICE detainees. 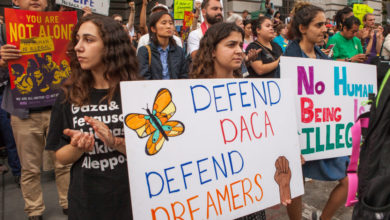 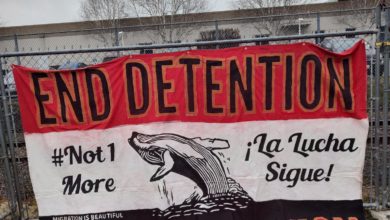