Activist Emma Jones speaks into a microphone while wearing a mask that features photos of her son, Malik Jones, and reads “Justice for Malik.” Liberation Photo: Linh Dao

On Sept. 25, over 75 people came together in downtown New Haven, Connecticut to demand justice for anti-racist organizers in Denver recently targeted by the police and for Breonna Taylor, a 26-year-old Black woman shot and killed in her home by Louisville police.

The show of solidarity along the New Haven Green is a continuation of New Haven’s fight against police terror. The city has seen mass actions since May, including a protest over Memorial Day weekend that shutdown a section of New Haven main Interstate highway arteries in response to the tragic death of George Floyd and other victims of police brutality. Over 250 people had  gathered on the Green the night before to demand justice for Breonna Taylor just hours after the Grand Jury decision on the case in Louisville, Kentucky. Friday’s action demonstrated that the people of New Haven will not rest until they see an end to police violence.

The rally was organized by the New Haven Branch of the Party for Socialism and Liberation and co-sponsored by Black Lives Matter New Haven, Life in My Days, and the MALIK Organization. The action was held in response to the Taylor decision, and in response to the recent arrests of Denver activists who were abducted by police after leading a peaceful sit-in demanding justice for Elijah McClain. The activists, which included three PSL comrades, were released after eight days in jail and are currently facing felony charges.

“There is no justice for Breonna Taylor,” PSL organizer Jasmine Graham said in the rally’s opening address.  “Justice would have been Breonna Taylor not being murdered in the first place. We say jail killer cops, not because it is justice, but because it is punishment. We know that prisons must be abolished, but until they are, we say jail killer cops!”

As the sun set, Emma Jones, head of the MALIK Organization and mother to Malik Jones — a 21-year-old Black man who was shot and killed by an East Haven, Conn. police officer in 1997 — reminded the crowd of just how deeply current systems fail the families of victims of police brutality even after losing their loved one.

“I have run to every single door looking for justice in the judicial system,” Jones shared. “And the doors get slammed in your face.”

Despite this, Jones continues to fight for a better world and encourages others to do the same. “We’ve been struggling for a long time,” Jones stated, “and we’re all going to struggle until we raise each other’s consciousness to a level where we get the components that we need to have an effect on a system that really needs to be overturned.”

Jones equated today’s social movements to an “incredible war [that] must be waged if we are to find justice, peace, and equality.” The audience, resonating with Jones’s sentiment, responded with a chorus of cheering and applause as church bells rhythmically rang in the background.

Fahd Syed, representing the Connecticut Chapter of the Council on American Islamic Relations, echoed Jones’s call to action. “What we have seen in this country is nothing more than white supremacy,” Syed asserted. “We have to defend our people even if it’s with our last breath.”

“When they’re throwing black bags over people and throwing them in the car without due process, it tells me the system is scared because they know the system is the problem.”

With the sun fully set, Ala Ochumare, co-founder of Black Lives Matter New Haven, reminded the crowd, “Each and every one of you can die at the hands of the system, but we also represent that same system.”
She asked the crowd assembled, “Do you want to participate in it or do you want to gain liberation?”  The protestors harmonically responded, “Liberation!” 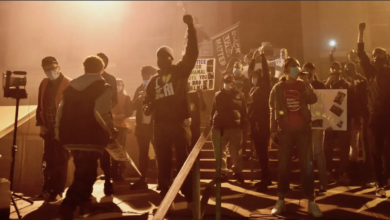 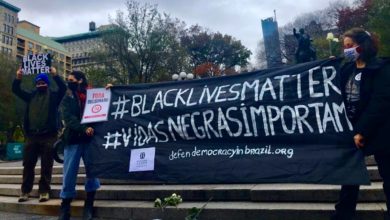 Racist killing in Brazil sparks protests, boycott & solidarity in US