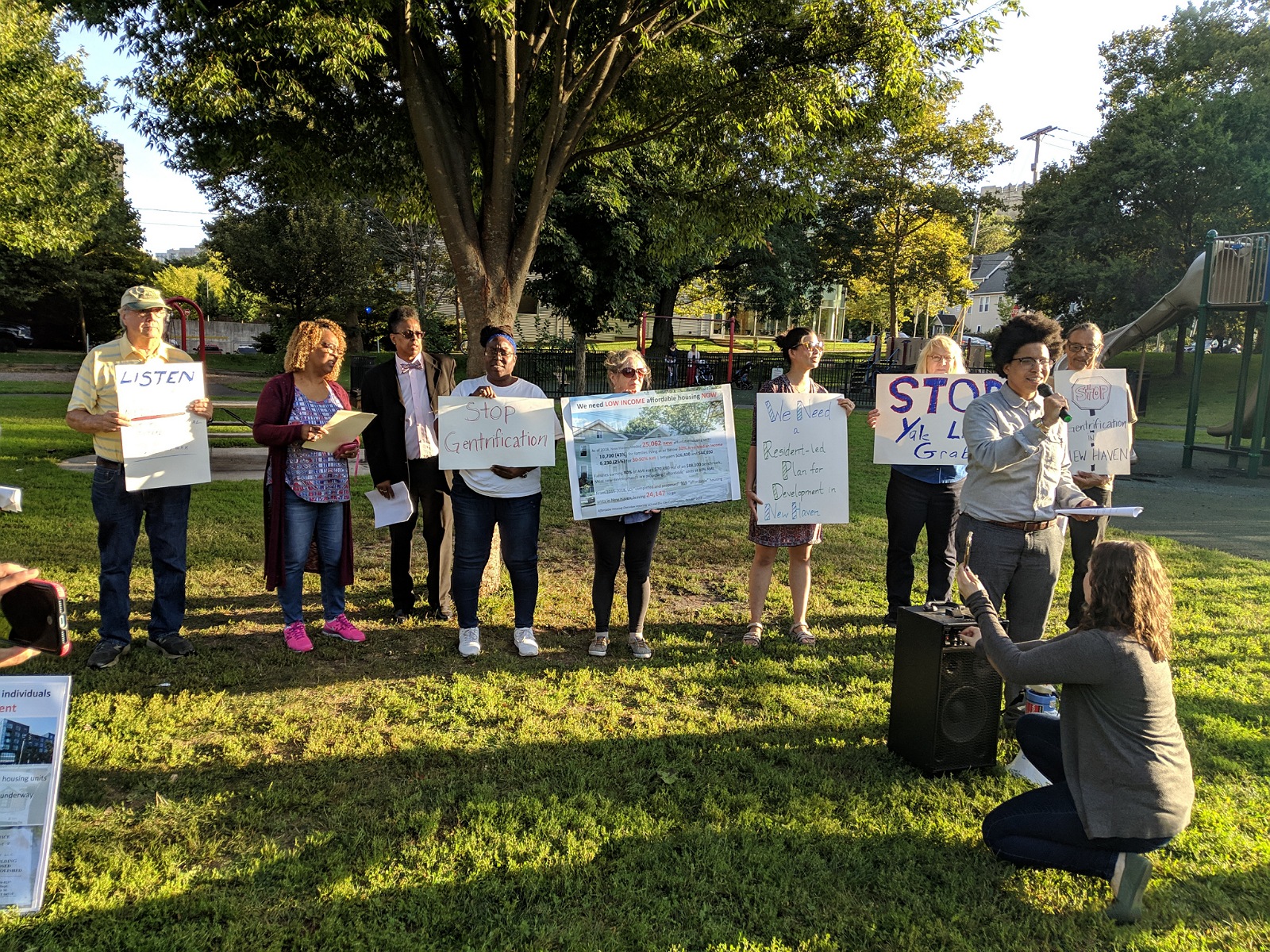 Residents of the New Haven, Connecticut fighting for housing justice won an important victory on Sept. 12 and wasted no time rallying support for the next battle the following day. On Sept. 12, the city Board of Alders Legislation Committee listened to public comments, then indefinitely tabled a proposed amendment to the city’s lead safety ordinance that tenants and activists argued would gut the ordinance and expose more children to the danger of lead poisoning. On Sept. 13, residents and activists gathered in New Haven’s Scantlebury Park, located in the heart of the historically Black Dixwell neighborhood, to speak out against a proposed skate park and a wider plan of rezoning that evoked memories of New Haven’s devastating “urban renewal” policies of the mid-century.

At the Legislation Committee meeting, representatives of city and state government agencies advocated for a weaker lead law, bowing to pressure from city officials and landlords, who want to avoid the expenses associated with lead removal and relocation of affected families. Community Services Administrator Dakibu Muley said, “a lot of work went into this proposed ordinance,” but community members had not questioned whether work went into the ordinance; they questioned whether the proposed measure was in the best interest of children’s safety.

The most contentious provision of the ordinance would quadruple the blood lead level in children that would trigger a mandated response from the city health department. The proposed ordinance would order not an inspection and lead abatement in lead-poisoned children’s housing under the new 20μg/dL threshold, but distribution of “a whole bag of educational material,” as Acting Health Director Roslyn Hamilton said. Hamilton expressed a distaste for strict actions against landlords, saying, “the goal is to have conversations with landlords to get them to do some work so we don’t have to drag them into court with an arrest warrant.” Of course, getting landlords to comply with an order for lead abatement is a different story.

Medical professionals addressed the dangers of lead poisoning, talking about the cognitive impairments suffered by victims and the challenges of recovering from the damage. Marjorie Rosenthal, a pediatrician, summed it up. “Lead is poison. No lead level is safe for anyone, especially not someone with a developing brain.” Speaking on the current threshold level of 5μg/dL, she added “the level of 5[μg/dL] was not chosen because numbers under 5 are safe, but because that’s when IQ levels start to fall.”

Educational material would not mitigate the danger of lead, something reiterated by medical professionals, parents of lead-poisoned children and community advocates. The Health Department under the proposed law would triage cases of lead poisoning, acting forcefully only in the most severe cases. Amy Marx, a staff attorney at New Haven Legal Assistance who works primarily with housing cases, argued against triaging, saying, “We should not triage… As a moral and ethical position, we should take care of all of these children,” before praising the strength of the current law, saying, “The current law is fabulous, judges [who have ruled for lead protection action] have interpreted it correctly, and children need to be protected.”

Parent of a lead poisoning victim Chyrise Holmes spoke candidly about her experiences with her child and her efforts to resolve the dangerous situation. She talked about her 3-year-old daughter’s lead poisoning about a year ago, saying, “there were so many things wrong… it was a process,” about the response from her landlord and the Health Department. She eventually had to seek help from New Haven Legal Assistance, where, she said, “[Amy] was able to get us immediately out of the home.”

New Haven resident Camelle Scott-Mujahid spoke about her experiences dealing with predatory and indifferent landlords in New Haven. She mentioned her current apartment — which was infested by squirrels so profoundly that they fell out of the ceiling — and advocated stronger measures against landlords. “When I hear the health department say that they are reluctant to take action against landlords or that they want to give them chances… landlords have shown disregard for the safety of people and children who live in their properties.”

Before the Legislation Committee voted unanimously to table the amendment, community organizer Kerry Ellington spoke frankly about the racialized impact of the proposed law. “Consider the following things: lead poisoning starting at 5μg/dL can cause lifelong harm. There is no treatment for lead poisoning. The only solution is to remove lead from the home. Lead poisoning is an issue that primarily affects Black and Latinx communities… The city is currently trying to change the law so our Black and Latinx children have less protection.“ Racist housing and development practices were also the focus of Friday’s action, a press conference to call attention to redevelopment and rezoning in the historically Black Dixwell neighborhood. Using funds from a Yale-affiliated organization, the city plans to build a skate park that Dixwell residents did not ask for and, as they demonstrated today, do not want. Dixwell resident Joy described it as “an example of development in Dixwell that ignores Dixwell residents,” and Kerry Ellington tied it into a wider plan for “fundamental changes the city is looking to make in the Dixwell-Newhallville community.”

Dixwell residents spoke and talked about how the proposed Dixwell Avenue redevelopment shows the city’s history of redlining and racist zoning in the Black neighborhood is being used as a weapon to pit residents against each other. Carla, a Dixwell resident, spoke about fears that the rezoning would displace residents of color due to the combined influence of an increase in property taxes and rent, proliferation of businesses intended to serve non-Dixwell residents, and harsher policing. She highlighted the lack of resident input in the city’s decisions about the neighborhood, saying, “We as residents have not been invited for so many years to be able to come to the table to sit down and participate in all this.”

Other locals who spoke criticized the way the proposed rezoning does not consider the character and history of the neighborhood. Under the proposed plan, buildings up to seven stories tall would be allowed, something completely out of sync with the two- and three-story buildings that are currently in the neighborhood. Olivia Mortson, a member of the Friends of Dwight Historic District, urged the city to conduct what she referred to as a housing character analysis in areas targeted for “revitalization” and to conduct transit-oriented development. She described the plan as “incomplete.”

Ellington described the gentrification the city is proposing as “an evolving project that grows over time.” She said, “We are not against development, but we need resident-led, racially-equitable, responsible development.” New Haven residents and activists are organizing and mobilizing for housing justice. Fighting for housing justice means that standing against unsafe housing and against predatory landlords, and for safe, attainable housing for all. Safe housing is a human right!