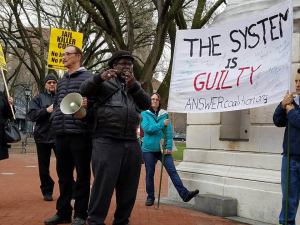 On April 2, approximately 50 community members, activists and organizers came together in downtown New Haven to protest the killing of unarmed Black man Akai Gurley and the ludicrous sentencing proposed for his killer, NYPD officer Peter Liang. The rally, called by the ANSWER Coalition, Moral Mondays CT and Black Lives Matter, was attended by people from a variety of backgrounds, from Yale students to members of the homeless community. Also present were members of Akai Gurley’s family, including his aunt, Hertencia Petersen, who has been tirelessly organizing around her nephew’s case since the murder.

With placards reading “Jail Killer Cops!” “Stop the War on Black America” and “Fists Up, Fight Back!”, in front of a banner reading “THE SYSTEM IS GUILTY” along with dozens of names of people murdered and abused by police, speakers spoke out in solidarity with Akai Gurley’s family and related the case to many other instances of police misconduct that have happened throughout the country. Norman Clement, an Indigenous organizer and rally chair, spoke about the infamous murder of Malik Jones by police over a decade ago. Malik’s mother, Emma Jones, was told at the time that her son’s life was not worth a penny, and Connecticut activists have been fighting alongside her for justice and an all-civilian review board for the NHPD since his death. Clement also brought up the epidemic of racist police brutality against Indigenous people, citing the recent murder of Loreal Tsingine in Arizona.

IV Staklo, a trans organizer with the Party for Socialism and Liberation, gave a statement of solidarity from the LGBTQ community, saying that trans people of color are one of the demographics most frequently targeted by police terror, and that it is crucial that all LGBTQ people fight for justice for all victims of racism and state-sponsored violence. Staklo read a list of trans people murdered and not given justice due to transphobia on part of police. The list included Kayden Clark, a young trans man who was shot during what was supposed to be suicide intervention by police, and Nizah Morris, a Black trans woman who was pistol-whipped to death by cops years ago.

Bishop John Selders, a lead organizer of Moral Mondays (a racial justice initiative in CT), expressed solidarity with Gurley’s family. “More Black people are in prison now than were ever enslaved in America,” Selders said. He finished his speech with Assata Shakur’s timeless chant: “It is our duty to fight for our freedom. It is our duty to win. We must love and support each other. We have nothing to lose but our chains.”

Hertencia Petersen was the keynote speaker, giving a powerful account of the details of her nephew’s murder and the police’s treatment of her family afterwards. She spoke about the fact that both Liang and Landau were immediately more concerned with their jobs than helping Akai. “He went looking for the bullet casing so that he and his partner could cover it up.”

Hertencia Peterson also stated that none of the officers involved have reached out to her family with an apology or an offer of support. “They did not look at the dying man and say I’m sorry. You did not contact or try to say I’m sorry to the mother, to the one who gave life to him, to the one that nurtured him. And I always ask… How on god’s earth can a human being see another human being lying there and not administer some kind of aid? What kind of human being is that? Is it because it was a Black man lying there, you figure that his life was not valuable? But Akai Gurley’s life was valuable – not only to his mother, to his daughter, to his family.”

The action was a strong show of unity both between organizations and communities and between a vast spectrum of working people and a family fighting for justice. New Haven’s rally is one of many solidarity events across the country in anticipation of the Liang sentencing. The people of New Haven made it clear: its residents stand firmly with victims and survivors of police violence, and will not rest until we have a new system that protects us all.