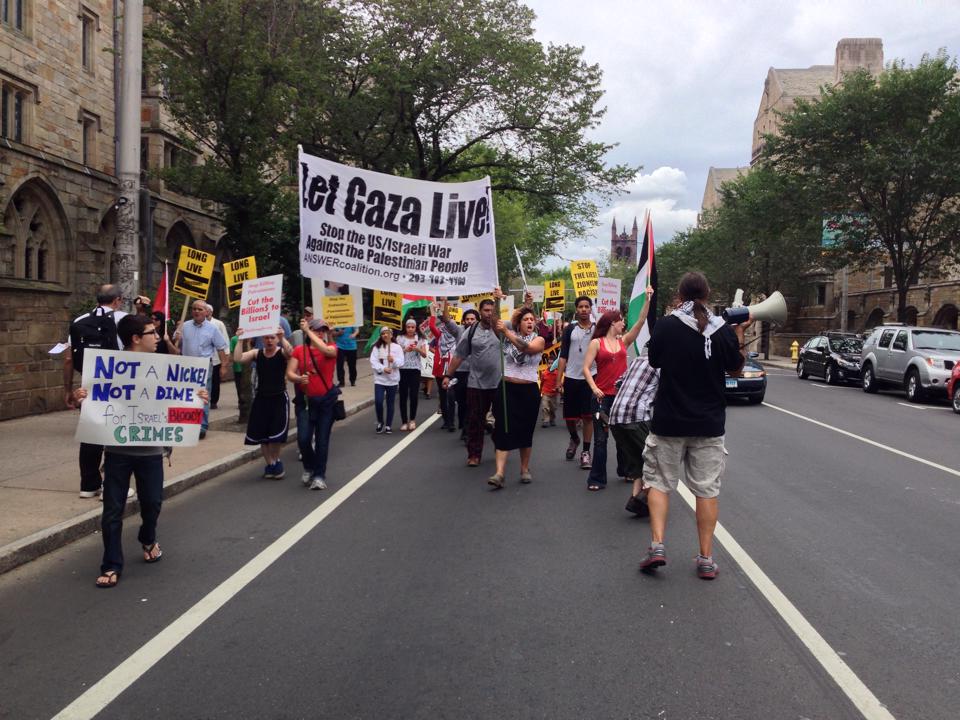 On Saturday, July 19, the 13th day of the most recent Israeli offensive against Palestine, the ANSWER Coalition called a rally and march to stand up against the massacre of the people of Gaza. At least 150 people came together at the New Haven Green to speak out.

At least half of the people present were families from Palestine and other parts of the Middle East. They stood at the front of the rally, holding handmade signs and Palestinian flags. Many of the loudest voices were those of children.

People expressed their disgust with the state-sponsored terrorism of Israel, the unanimous support of the genocide by US politicians and the billions of dollars of annual aid to Israel. Norman Clement, an ANSWER organizer, spoke about the link between the genocide in Palestine and the extermination of Native populations in the US. “It’s the same thing; the same push for colonization, to steal land and wipe out the people on that land.”

Signs read: “Palestinians Love Life! Their children are precious! STOP punishing them for existing!”, “Cut the Billion$ to Israel”, “STOP THE LIES! ZIONISM IS RACISM!” and “LONG LIVE PALESTINE!” In spite of some attempted interruptions by hecklers, the protestors’ chants were heard loud and clear echoing off the buildings downtown: “From the river to the sea, Palestine will be free!” “Not another nickel! Not another dime! No more money for Israel’s crimes!”

Speakers called out CT politicians for their complicity. Earlier that day, a few activists had taken the time to personally confront CT Senator Chris Murphy about his position on Israel. Murphy had claimed that he did not know of Senate Resolution 498, the resolution confirming full Senate support for Israel’s actions. SR 498 passed with unanimous consent, meaning that no Senators objected to it.

By the time it was time to march, the group had grown to its full size and volume. With a banner reading “LET GAZA LIVE!” heading up the march along with two people bearing Palestinian flags, the march proceeded through downtown New Haven, going through shopping areas and Yale territory and finally taking the streets. When passing by the Yale buildings, the group chanted: “Wake up Harvard! Wake up Yale! All of Gaza is a jail!” and “Bombing Gaza – shut it down! Children dying – shut it down! Zionism – shut it down! The whole damn system – shut it down!”

The march, like the rally before it, was accompanied by supporting honks from cars. A few people drove alongside the march, waving Palestinian flags out of their windows. The march concluded at the original rallying point at the intersection of Church and Chapel. Many more people spoke, including children. Zena, a young Palestinian girl, came to the bullhorn to say: “Palestinians do not have a right to a voice the way we do here. It’s our job to use that right to speak up for Palestine. I believe that Palestine can be a free country, if we all come together and speak out and fight.”

The New Haven march was the fifth action in Connecticut for Palestine in two weeks and followed a march in Hartford the previous day where 150 people came out, many coming from mosques after Friday prayer.