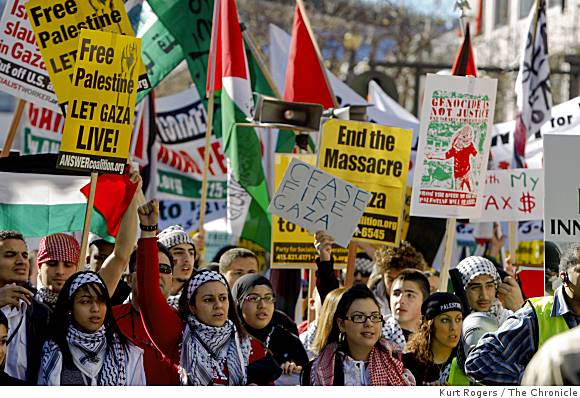 On July 24, the NPR affiliate in the San Francisco Bay Area had two Palestinian activists as guests on a local talk show, an unusual occurrence. During the program, a caller stated that people no longer participate in pro-Palestine demonstrations because the protesters raise chants like: “From the River to the Sea, Palestine Will be Free!” Just the night before that, a leftist acquaintance of this writer said that he considered this chant to be “dangerous.”

During the U.S. occupation of Iraq, the ANSWER Coalition had to wage a constant struggle against liberal anti-war forces for the inclusion of the Palestinian cause among the demands of anti-war protests. Resistance to the inclusion of Palestine seemed incomprehensible, considering the short distance that separates Iraq from Palestine geographically and, more significantly, U.S. strategy in the Middle East making the two inseparable.

Liberals in the United States have a million reasons why they won’t stand against Israeli aggression and murder. They constantly make demands on the Palestinian people, the victims of bombings, invasions, occupations, and a genocidal blockade. Over the past 66 years, Palestinians have suffered unimaginable atrocities at the hands of Israel and its U.S. sponsor. Yet, these liberals set many conditions for the Palestinians before they will choose to defend this oppressed, occupied people. Their conditions are not that different from the conditions that Israel demands of Palestinians: “We can’t negotiate with you unless you recognize the right of the state of Israel to exist, denounce violence and ‘terrorism,’ and abandon the right of return for Palestinian refugees.”

The chant calling for freedom “from the river to the sea” refers to historic Palestine from the Jordan River to the Mediterranean Sea. This should not be a particularly controversial chant. It obviously means that Palestinians aspire to be free from Israeli occupation in the West Bank, free from the blockade of Gaza, free from second class citizenship in Apartheid Israel within 1948 borders, free from having to live as refugees denied the right of return home. Why would Palestinians not have the right to call for their freedom in all of historic Palestine? What exactly is objectionable about that?

“Oh, but the Palestinians must recognize the right of the Jewish population to live there,” the liberal would retort. Palestinians, it seems, have an obligation to recognize the “rights” of their oppressors, their occupiers, and, they must do it in every chant. But why is this type of demand being made only of Palestinians?

These very same liberals will jump at every opportunity to call for a “Free Tibet.” Now, Tibet has been part of China for 700 years, unlike Palestine which the British handed to the Zionists as a gift – a gift that was not theirs to give. In reality, it was not even a gift, but a payment for services Israel was going to provide to the imperialists. The majority of the population of Tibet today is Han Chinese, not Tibetan. And the Han Chinese have migrated there not through the forced removal of Tibetans through a terror campaign. The Han Chinese living in Tibet have not made Tibetans refugees; have not dropped bombs on the people of Tibet. They have not destroyed Tibetan schools, hospitals and places of worship.

The example of Tibet is qualitatively different from that of Palestine. But even if we accept the false premise that Tibet is brutally occupied by China, the question remains: Why do liberals leading the “Free Tibet” movement not demand that Tibetan separatists recognize the rights of the Han Chinese to live in Tibet? There certainly have been many cases of violent riots by Tibetan separatists – mostly promoted and supported by the United States. But before calling for a “Free Tibet,” why do these same liberals not demand that the Tibetans condemn violence? Under the Lamas, Tibet was not exactly a democracy. It was a brutal form of feudal dictatorship where the ruling class and the clerical establishment were intertwined. Why do these liberals not demand that Tibetan separatists endorse democracy and denounce the rule of the god-king, the Dalai Lama?

During the anti-apartheid movement in the 1980s, were progressives demanding of the African National Congress to recognize the “rights” of racist whites in South Africa? Which person in their right mind would demand that Jewish victims of the Holocaust recognize the rights of
their Nazi oppressors and murderers? Which sane person would demand Native Americans observe the right of white settlers to ownership of stolen lands? Who would ever demand that slaves in the U.S. South recognize the rights of their masters to continue to own and operate the plantations?

Why the inconsistency? Why are only Palestinians being subjected to conditions and demands from supposed progressives?

The garrison state of Israel is too central a component of U.S. strategy in the Middle East for any significant faction of the U.S. ruling class to substantially question Israel. Former President Jimmy Carter and others may occasionally call for a kinder, gentler Israel, but a critique of the very existence of the state of Israel as an illegitimate, racist, settler state is out of bounds. Therefore, bringing up the issue of Palestine or going beyond mildly criticizing Israel’s most outrageous crimes remains “divisive” in the eyes of liberals.

The idea that “Palestinians want to throw the Jews into the sea” is NOT the position of as single one of the Palestinian resistance organizations; not Hamas, not Fatah, not PFLP, not DFLP, not Islamic Jihad. This writer has not ever heard from a single Palestinian at a rally or anywhere, ever, the idea that when Israeli apartheid is defeated Jewish people should all be exterminated or expelled. Often, Palestinian activists acknowledge the contributions of Jewish anti-Zionists in solidarity with Palestine.

Even if throwing all the Jewish people out were the position of Palestinian resistance, the safety of Israeli Jews would not be a serious concern. Israel is the most highly militarized state in the world. It has a dazzling array of armaments including the most modern fighter jets, tanks, rockets, missiles and even nuclear warheads. What weapons do Palestinians have? Widely inaccurate rockets, rifles and rocks. Concern for the plight of Israeli Jews and settlers is totally unfounded. Instead, one needs to be concerned about Palestinians, the people at the receiving end of the Israel’s murderous assaults.

For those on the U.S. left, obviously the desired eventual outcome of the conflict would be a single secular state, with citizens from all religions granted equal rights, and reparations paid to Palestinians. A socialist state that might arise out of a revolutionary situation would be an optimal outcome. However, this wish, or any alternative view of what a future Palestine should look like, must, under no circumstances, be held as a condition for standing with Palestine. Revolutionaries and progressives must uphold the right of self-determination for all peoples oppressed by imperialism. What that means in this particular case is that Palestinians have a right to choose their own future free of imperialist and Zionist oppression. Whether it’s a workers’ state, a capitalist democracy or even a monarchy, that is something that Palestinians have a right to decide for themselves. This is not something for activists in the U.S., or anywhere else outside of Palestine, to decide. Anti-war activists and progressives raise demands on imperialists and oppressors, not on the oppressed. The Palestinian people have a right to resist occupation and oppression through any means at their disposal. They have a right to set a future path of their choosing. And, regardless of what future form of state they adopt, they have a right to be free of Zionist and imperialist aggression.

From the River to the Sea, Palestine Will be Free!