No Place at Northeastern: students, community members rally against DHS 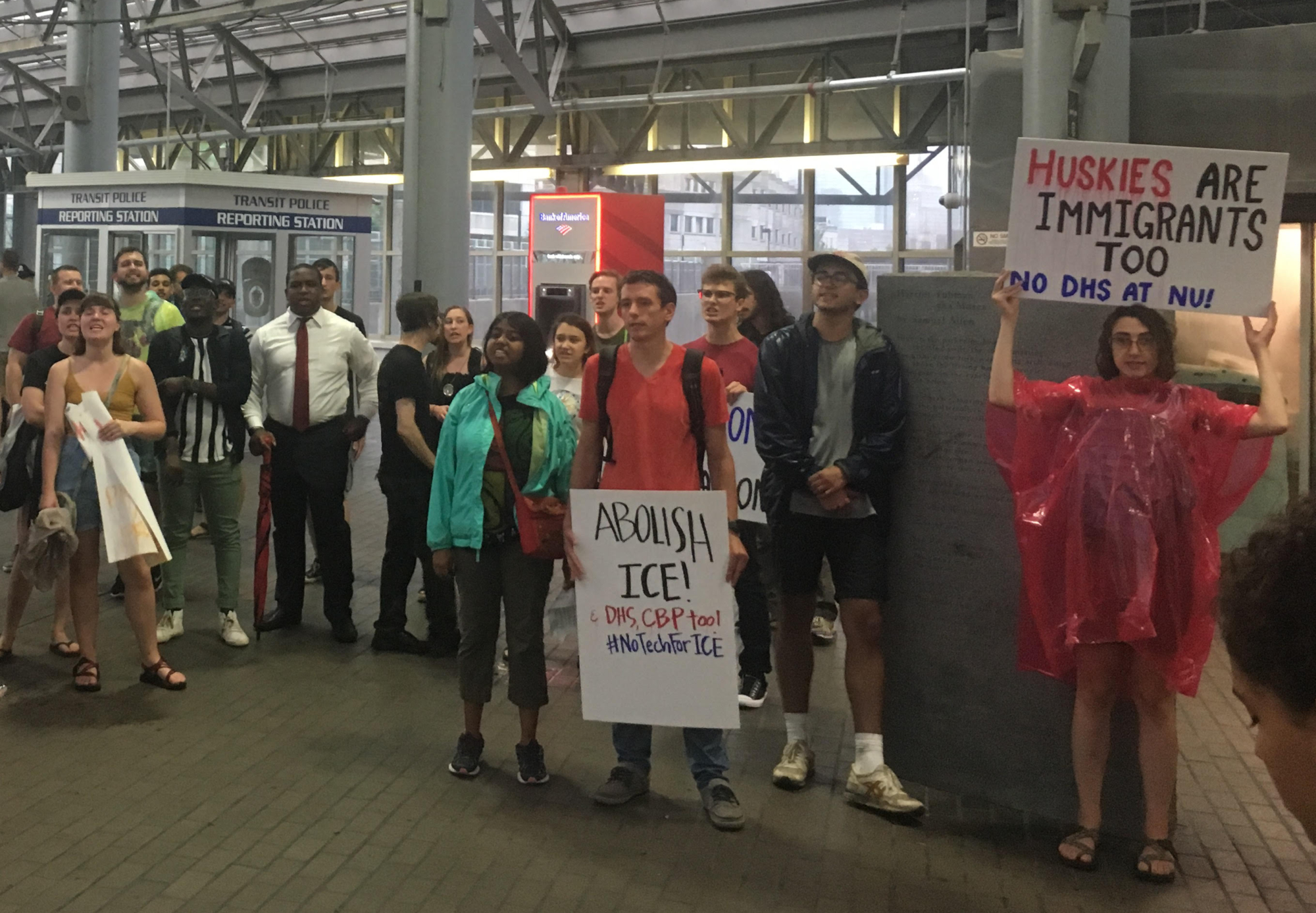 On July 17, Northeastern University hosted a two-day invite-only conference for Customs and Border Protection about “advanced border technologies,” which the university attempted to under-publicize, almost going unnoticed by students.

One day before the conference was set to begin, an alumni happened to discover the conference through the web page of a Northeastern program, and notified the Progressive Student Alliance. This information was quickly publicized, and as backlash spread across social media, organizers in PSA as well as NU for the Common Good, the NU Students of Color Caucus, the NU Grad-workers Union, and Mijente Boston began working on an action to protest this collaboration with CBP.

The next day at 5:30pm, in the midst of a severe flash flood warning and pouring rain, about 40 students and community allies held a march and rally to expose Northeastern’s complicity and role in the U.S. government’s deportation machine. The march began at Ruggles Station and went a short distance to Egan Research Center, where the conference was just finishing up. There, the organizers put on a brief program, chanting “There are no excuses for human rights abuses!” and “Tell Aoun [Northeastern’s President] no more aid, no more tech for deadly raids!”

Conference attendees walked by, some smiling and laughing, waiting for their Ubers and watching the protest at a distance behind five or six Northeastern Police Officers. Husayn Karimi, an organizer with the ANSWER Coalition (Act Now to Stop War and End Racism) and current student at MIT, drew a connection between Northeastern’s involvement in war and “national security” research and how MIT rose to prominence by developing war technology. Citing a recent “AI Strategy” document released by the Department of Defense in 2018, Karimi stated that the U.S. government is increasingly looking to high-tech institutions like Northeastern and MIT to serve the technology needs of the U.S. military and purveyors of domestic terror like ICE.

This is far from the first time Northeastern has profited from violence and destruction; according to Alex Ahmed, one of the student organizers of the action, “last year [Northeastern] had an ICE contract where a researcher at Northeastern had a grant from ICE to develop surveillance technology… and Northeastern has a whole other campus in Burlington [Massachusetts] that’s all military research..” In addition to aiding and abetting the U.S. government, Northeastern also collaborates with private weapons manufacturers. Jessica Dampier, another student organizer at Northeastern, explained that “Northeastern has really close ties to Raytheon. The amphitheater where the [CBP technology] conference was being held is called the Raytheon Amphitheater. We also have a huge Co-op program with them. They’re one of the biggest Co-op employers. Northeastern really funnels engineering students into Raytheon after graduation.” Co-op is a program where the university places students at six month internships which are usually paid to varying degrees.

The research services that universities provide are instrumental in facilitating the violence perpetuated by both the U.S. government and private companies. Northeastern, MIT and many other schools farm out their technological expertise to develop new tools of oppression to be used by ICE, the Department of Homeland Security, the NSA, and the Israeli Defense Forces and many other institutions. In the past, powerful student movements have risen up and demanded that their universities use their extensive resources to create progress instead of harm; in the 1980s, student movements across the nation demanded that their institutions divest from South Africa, which was instrumental in bringing down the apartheid government, and today many students across the country engage in Boycott Divest and Sanctions campaigns against apartheid in Isreal. Although far from its peak in the 1960s and 1970s, student activism certainly has a role in progressive and revolutionary movements going forward. As the U.S. government continues to absorb universities within its oppressive apparatus, demonstrations such as this one become increasingly vital.