“Seventy percent of this nation’s poor are women and children,” voiced Kerbie Joseph of the No New Jails Coalition in a fiery opening of the “Feminism for the 99%” conference held March 23  in New York City. “Our challenge in the midst of a coordinated offensive against women,” she said, “is not only react but also to go on the offensive and truly think about what we need to build a movement that can win.”

Some  120 people registered for the day of radical feminist talks and workshops, an all-women anti-imperialist panel,  performances including one from an openly queer artist, and a keynote speech by Gloria la Riva, back from a month-long fact-finding mission in Venezuela. Questions explored included: “How can we reclaim feminism in the radical tradition?”  “How can we build a new militant movement for and by working women?” “How can we create an alternative to capitalism – socialism?

The conference emphasized women’s, including trans women’s, contributions to class struggle. Workshops provided a place for political discussion and for feminists to strengthen their skills and sharpen their perspectives. The panel discussed why feminists must recognize the global struggle of women and the responsibility they have to resist U.S. imperialism.

Participants were of all ages, backgrounds and ethnicities, some from neighboring states. An instructor in women’s and gender studies flew from Rochester to attend. Another participant was involved with Dr. King in the Civil Rights movement in the South. Most attendees, however, were in their 20s. Many were newer to politics and hungry for radical space to discuss ideas. Transgender, gender fluid, and queer people were openly visible in a safe and empowering space.

Workshops train women to be leaders

The workshops were both broad feminist political discussions and practical skill shares to build leadership and were open to all.

The workshop “Building an Anti-Racist Women’s Movement” explored how special oppressions intersect, their relation to class struggle, and the urgency of learning from previous mistakes to build a united front against racism. A SUNY student spoke about the racist Asian model stereotype in the education system and how it affects their community of fellow students. They inquired about talking points to bring back to campus with a working-class perspective aimed at replacing backward viewpoints with solidarity.

A workshop entitled “Does Marxism lead to women’s liberation?” focused on the origins of the oppression of women through a reading by Frederick Engels that explained that matriarchal society lasted for the majority of human existence, while class division and women’s oppression began with patriarchy.

Some were as surprised as they were empowered to find this was true. One participant said, “At first I was uncomfortable with the fact that women had to take care of the family, but then I realized women were regarded equally … and this was seen as valuable work.”  Another interjected: “It’s capitalism that gets women’s labor for free – cleaning the house, taking care of kids. It’s not valued at all.”

“When We Strike We Won: Women and Labor” explored the invaluable role women have played in the labor movement, and how women can organize on the job.

Since there are many difficulties women and women-identified people face navigating male-dominated spaces, other workshops were dedicated to building practical skills for activists. They included “Know Your Rights on Housing,” “Speaking and Agitation,” and “Organizing 101 – Defeating Amazon.”

Attendees practiced speeches, participated in info sessions, got organization tips, and received feedback. Workshop attendees built their confidence, knowledge and skill sets to share with and encourage others to come into the movement. After attending the speaking and agitation workshop, a Black trans woman said, “I’ve never been given a space like that to speak.”

A panel of women leaders representing struggles in Brazil, Honduras, Haiti and Venezuela focused on Latin American solidarity and building a feminist anti-imperialist movement. Their stories of the sacrifice and bravery of women leaders left the crowd in awe.

Myriam Marques spoke about Brazil’s first democratically elected woman president Dilma Rousseff, who was forced out of power in 2016. Current President Jair Bolsonaro is a reactionary who openly opposes the rights of women, indigenous and queer people and represents a major step back for the liberation of women in Brazil.

Lucy Pagoada-Quesada talked about the conditions that led to last year’s Honduran migrant caravan to the U.S., which included many women and children. She highlighted how the 2009 U.S.-backed coup  against elected President Manuel Zelya has destabilized the region, vastly increased poverty and violence,  and made it nearly impossible for women to find work and safely raise children in their home country.

Joycelyn Gaye fiercely defended the Haitian revolution of 1708-1804, which resulted in the world’s first Black republic and inspired people around the world. She spoke of the intervention of French and U.S. imperialism stifling the development of that nation. Most recently, she said,  United Nations troops have been used to militarily intimidate and occupy the county, which has forced many Haitian women into deepening poverty.

Flora Rodriguez addressed the current struggle in Venezuela: “Chavez was a feminist … it was he who made policies to place women in leadership … he understood its importance.” Rodriguez spoke about the the high level of class consciousness and the bravery of the Venezuelan masses standing up to U.S. aggression.

The conference was closed by keynote speaker and Party for Socialism and Liberation 2016 presidential candidate Gloria La Riva, who recently returned after a month in Venezuela. Her riveting stories defending the Venezuelan people tied together the points made from the panelists, and made it clear that imperialism is ultimately a feminist issue. She explained that Venezuela “is in the middle of a very hard struggle, the threat of war and severe sanctions.” But, she added: “The women are amazing. … They’re the ones who organize in their neighborhoods … they’re the ones who are the spokespeople of the street, the heads of the communes, the heads of the councils.”

La Riva showed videos of women militantly upholding the principles of the country’s Bolivarian Revolution. Her speech made clear that women are a part of leadership in the anti-imperialist movement in Venezuela and it is our duty to stand in solidarity with them. La Riva is currently on a national tour and may be speaking in your area.

The conference provided a place for activists, students, workers and academics at all different levels to discuss, share, learn and grow together. Lively discussions of Marxist feminist ideology filled the air, deepening perceptions of the role of feminism in revolutionary struggle.

Jessy, age 27, told this reporter,“I learned how organizing applies to the work I do and more about the world around me.”

Jazmine, age 24, said she learned, “There is a movement for women’s empowerment, not just on a screen, or in an article but in a realistic setting and its empowering!” 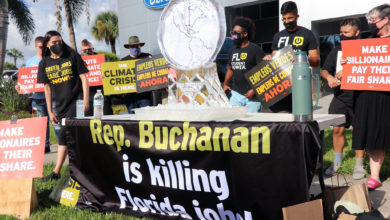