Why is the East Harlem community not in charge? 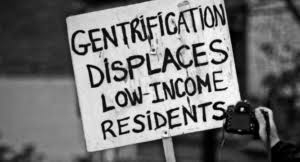 The City Planning Commission in New York City is considering a proposal to rezone the working-class neighborhood of East Harlem in order to build luxury housing there. This commission will decide in October whether to either not approve the proposal or approve it and pass it on to the City Council, which would then vote on it in November.

At each of three public hearings, the community has forcefully said “NO” to the rezoning proposed, because it would destroy low-income rental units and raise rents beyond the reach of current residents. But there is great concern in this largely Latino neighborhood that the rezoning is already in the works. Why is this? What is the City Planning Commission, who is on it and who do they work for?

When a neighborhood is up for “rezoning” or “development,” it is not enough to just “consult” those who live in the area. Knowing the community’s issues, family income, what rents are affordable, and the culture of the community would only be the first step. The community involved needs to be in charge. Community groups, tenants organizations, unions, and other local organizations would develop a proposal, then hire “experts” in construction and real-estate development to work for them.

But with the East Harlem proposal none of these things are in the works. Every member of the City Planning Commission, all of whom are appointed by the mayor or borough presidents, represents the real-estate industry, not one represents the community. Who are these people?

Why is he making decisions about East Harlem?

The Yale Law Review in 1996 published an article, “Restraining the Power of Business Improvement Districts: The Case of the Grand Central Partnership.” It cited the Partnership as “opposed to street vendors,” “too harsh on the homeless and poor,” and “[contributing] more to the privatization of government than the common good.” Yale Law Review explains that BID law grants weighted voting to favor property owners, who shall always enjoy a majority on the Board of Directors, the aim of which is to increase profits to its members despite its non-profit status. Has anything changed?

Grand Central Partnership was cited as “rousting currently homeless people from sidewalks and doorways, using violence if necessary.” One member of these “goon squads” testified that “We did beat people up” but recanted a week later after six unknown assailants beat his girlfriend and sent her to the hospital. After the beating, he received an anonymous call asking him to recant his allegations, which he did.

Cantor/Seinuk Group was a structural engineering firm that built the Helmsley Palace, which was the first use of high-strength concrete in New York, and the Trump Tower. Cantor/Seinuk prided itself on being a field leader during its 40 years and has completed billions of dollars worth of work within the United States and elsewhere.

(Note of correction: A previous version of this article stated that Cantor remained CEO of this firm. In a letter to Liberation, Cantor indicated that he has no connection with this firm, was “fully paid out in 1999,” and that this company name has been retired. A new search found that Cantor recently worked as a consultant for Tishman Speyer, an international real estate firm that controls tens of billions of dollars in properties. We have responded to Mr. Cantor here: “Correction: NYC commissioner is big-time, not small-time, shill for developers.”)

Eaddy has over 20 years of experience in real-estate development and consulting. Ten years were spent holding state- and city-appointed government offices, including project manager for the Grand Central Terminal Redevelopment. Savills Studley’s Incentives practice “helps maximize financial support from public-sector agencies” — in other words procures government funds for private use.

This firm specializes in “market-based” solutions to community development.

ATC oversaw the planning and building of the upscale Chelsea Market, catering to the tourist industry. Chelsea is considered the epicenter of gentrification in this city.

Hudson Yards is one of the largest redevelopment programs ever planned, and probably the largest gentrifying project ever planned in the U.S. It is also located in Chelsea. When finished it will consist of 16 skyscrapers containing more than 12,700,000 square feet (1,180,000 square meters) of office, residential, and retail space — overwhelmingly commercial and high-end luxury housing. In May 2017, Hudson Yards Infrastructure Corporation announced the sale of $2.15 billion of Series 2017 Second Indenture Bonds, comprised of $2.12 billion of tax-exempt fixed rate bonds and $33.4 million of taxable fixed rate bonds. In addition, for Hudson Yards “the total value of tax breaks will be higher than the $723 million so far,” fiscal analyst James Parrot explained to The New York Times on June 16.

Hope Knight, president and CEO of the Greater Jamaica Development Corporation and former CEO of the Upper Manhattan Empowerment Zone, an organization that uses tax incentives and public funds to attract private investment

Orlando Morin, an associate with the Bluestone Organization, a private developer of “affordable” and market-rate housing, as well as the Empire State Development Corporation

Why is the real estate industry, which has overseen the destruction of so many working-class neighborhoods in New York City in the name of profits, allowed to be in charge of doing the same to the historic East Harlem neighborhood? Because the real-estate industry is answerable only to Wall Street when it really needs to be answerable to the community.

Who doesn’t need affordable housing? Gentrification has been the scourge of New York City for many years. Community after community has been rezoned for luxury housing that working-class people cannot afford. The real-estate industry and its Wall Street overlords have been driving working-class people out to make room for ever greater profits for themselves.

Now these giant corporations are focused on East Harlem. Here, the median household income is $30, 973. That means that an affordable monthly rental needs to be $500 to $700 — no more. The city government admits that over half the households in the neighborhood are already “rent burdened,” but in the rezoning proposal only 20 percent of new apartments, at best, would be “affordable.” Community groups dispute even this small percentage as inflated.

Residents of East Harlem demand that the needs of the community come before those of private real estate. An ongoing petition campaign by the Justice Center in El Barrio and East Harlem Preservation rejects the rezoning proposal and calls for 100 percent affordable housing on any new construction. On Sept. 7, East Harlem Preservation has invited board-certified City Council candidates seeking to represent this district to debate housing, tenants’ rights, gentrification, police harassment, and other vital community issues.

To find how you can help, contact East Harlem Preservation or the Justice Center (212-907-7118). All New Yorkers have a stake in stopping the scourge of gentrification in East Harlem!