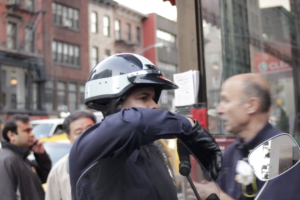 Police brutality has existed before the coronavirus pandemic, but it is now being covered up with messaging of “public health measures.” Multiple videos and news accounts emerge daily of the New York City Police Department  brutalizing and abusing New Yorkers under the guise of social distancing enforcement–like a 9-year-old boy who was savagely arrested for selling candy on the train while with his mother. Unsurprisingly, the limited data released have revealed that the vast majority of enforcement-related summons and arrests were disproportionately of Black and Brown people.

Despite this clear evidence of the racist, violent actions being labeled as social distancing enforcement, New York City Mayor Bill De Blasio continues to downplay the situation, stating,“The numbers of arrests and summonses are extraordinarily low.” He went so far as to claim that “There’s been a huge amount of restraint by the NYPD.”

It was Mayor De Blasio who gave the NYPD the order to “aggressively enforce social distancing” in the first place. CBS Local News reported the results of this order: a staggering racist imbalance, as 93 percent of the arrests were people of color. In Brooklyn alone, 7-out-of-8 people arrested were Black– despite the fact that Black Brooklynites are only 34 percent of the borough’s population.

This “aggressive” enforcement is even more concerning given that as early as March nearly 100 members of the NYPD had tested positive for COVID-19. Of the 98 positive results, 70 were among uniformed officers while 28 were civilian members of the department. Many officers are not wearing any PPE–while they violently round up Black and Brown community members, putting those arrested at risk of contracting the virus.

For the first time in the history of New York City’s subway system, the entire line is now shut down from 1 am to 5 am starting May 6. Despite valid concerns to maintain a clean subway system, this effort was part of a wider effort to use the pandemic as an excuse to repress homeless people in New York. On any given several thousand homeless people sleep in the subways because they have nowhere else to go. With inadequate transportation and resources set up for the homeless now being kicked out of the subways, they have been left outside in the middle of the night. The city government has not provided safe ways to house homeless New Yorkers. Last week, for example, many of those sent from the subways to a shelter were seen sleeping on the shelter’s steps inches apart and without masks.

During the pandemic, poor and working class people have experienced devastating cuts to public health, social services, safety net, education, jobs (via job freezes) and summer youth employment programs.  The  $6 billion budget of the city’s policy department, however, was not subjected to any cuts at all. Many agencies have been put on a hiring freeze, but not the police department.  In fact, the police budget allows the hiring of 1,000 more police officers during this pandemic to further brutalize communities of color. This perfectly intact budget expands a  police presence and the violence it brings into social services like homeless outreach, mental health response, youth initiative and social distancing– all areas where police involvement has consistently proved to be a failure.

These $6 billion  should instead be reallocated to support the poor and working class through this pandemic,  preventing many of the drastic cuts to social services. The alternative to these program cuts would be to not only halt the enforcement of low-level offenses during the pandemic, but end this policing that is terrorizing New York City communities. Creative solutions,  not budget cuts, are what’s needed. For example, public health professionals and community organizations should be funded and  tasked with respectfully educating New Yorkers about the importance of social distancing and help to create new norms that will protect everyone while mass testing is implemented. Working-class New Yorkers know their neighborhoods, how to interact with community members, and how to truly protect public health; clearly this is not known or practiced by the NYPD.