President’s immigration delay: A kick in the teeth to Latinos, immigrants

President Obama, April 2009, in reference to his pledge of Comprehensive 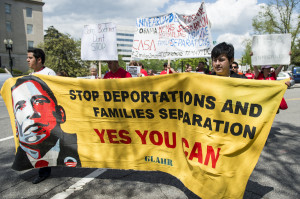 Immigration Reform: “I see the process moving this first year.”

President Obama, June 2014: “If Congress will not do its job, at least we can do ours… I expect the recommendations before the end of the summer, and I intend to adopt those recommendations without further delay.”

From the moment President Obama began campaigning for the 2008 presidential election, he was lying. His campaign made promises that he would later intentionally break. The sad part is that we already expect this of U.S. politicians – even the president.

In some ways, Obama’s presidency has been different: this President has faked legitimate concerned for those separated families, for children torn from their parents.

But President Obama, as a bourgeois politician, is not really so different than the others. During his presidency, he has run the largest deportation machine in U.S. history. His promises to pass immigration reform in his first year as President rang hollow when he simply failed to try – even though the Democrats controlled both the House and the Senate.

Erika Andiola, an undocumented activist whose mother is in deportation proceedings, described the move as the President “throwing [Latinos] under the bus.” She is right. While the Democratic Party uses immigrant suffering to its advantage with conservatives, approximately 1,100 people continue to be deported daily.

Cecilia Munoz, Director of Domestic Policy for the White House, tried to excuse the delay by pointing to supposed political necessity. This is also a lie.

As the clock ticks on Obama’s latest promise of action by the end of the year, let’s remember: Democrats and Republicans lied to us and threw over 2 million of our working brothers and sisters under the bus. We cannot trust them with setting policy, and we cannot trust this corrupt system to serve justice. Let’s replace it with a system that has a fighting chance.

Heather Benno is an Iraqi-American activist and lawyer based in Washington, D.C. She focuses on immigrant rights, women's rights and anti-racism organizing.