The Pasadena Tenants Union of Pasadena, California, declared victory last week for their Measure H campaign on the ballot in Los Angeles’s midterm election. The vote for the measure currently stands at 52.30% Yes (19,480) to 47.70% No (17,764). This measure entails four main provisions. It limits yearly rent increases, prohibits evictions without just cause, establishes a rental board for enforcement, oversees the previous two components and creates a registry of all rental units in the city.

One of the leaders of the campaign and PTU member, Jane Panangaden, has been fighting for this campaign for a number of years. She reports, “There was an attempt by the PTU to qualify a similar but less expansive law on the 2018 ballot, which failed due to not collecting enough signatures.” After failing at that time, the PTU redrafted their proposal and used their prior organizing experience to launch the 2022 campaign.

Panangaden continued, “After we did not get enough signatures we decided to go through an extensive redrafting process and used the experience we had organizing on the ground in the city to strengthen all parts of the law for future organizing. We made the final decision to go for the 2022 election even though we were in the middle of the pandemic and it was a very difficult time to organize a lot of in-person canvassing. We felt that with the speed of people being pushed out of the city we could not afford to wait another two years and had to try now. We launched originally in June of 2021.”

While the PTU has been successful in passing Measure H, there still remains significant work to be done. Panangaden elaborated, “In the last couple of months of canvassing, we got a lot of reports of entire buildings getting 10% rent increases, which is the legal increase under AB 1482. There are a number of relatively medium- and large-size buildings out there which are ready to be organized.” Additionally, the details of the measure include a rent roll back to May 2021, which renters are unlikely to know about, and about which their landlords are unlikely to inform them. “We will probably need to go canvassing again, at least in the renter dense areas of the city. We will also have to work on the appointments to the first iteration of the rental board.”

The successes of the PTU speak to the importance of an organized and militant working-class movement that will not compromise against the parasitic landlord class and capitalist state. Discipline and the ability to quickly mobilize large numbers of people were crucial to the success of the campaign, as Panagaden explained, “You cannot win this kind of result without having an enormous volume of face to face conversations with people in the city. There is no way that you can win it just by printing a lot of mail or posting a lot of social media. You really need to talk to people, which is a huge amount of work.”

The first sparks of the tenants movement have been lit in Pasadena. The struggle for establishing housing as a fundamental human right is no longer an abstract, but a real movement that abolishes the present state of things.

Visit to support or join the Pasadena Tenants Union. 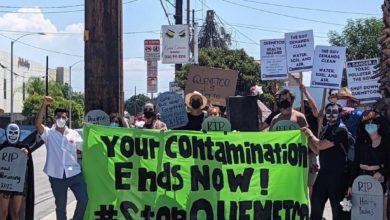