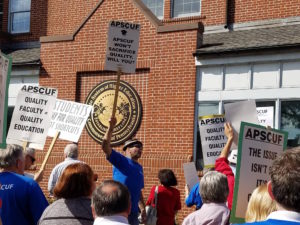 At 5:00 AM, Oct. 19, after 477 days without a contract, the Association of Pennsylvania State College and University Faculties went on strike for the first time in the unions’ nearly 80-year history. APSCUF represents 5,300 faculty who teach 105,000 students at the 14 Pennsylvania State System of Higher Education universities across the state. Early this morning APSCUF released a statement saying that, “Until the State System negotiates a contract APSCUF believes is fair to students and to faculty, faculty members will be on strike.”

The State System refuses to negotiate in good faith

For nearly the entire time APSCUF’s negotiation team was at the table since the current contract expired June 30, 2015, they consistently reported PASSHE’s unwillingness to negotiate in good faith. Eventually, on September 12th 2016, APSCUF members overwhelming voted to authorize their negotiation team to call a strike if a contract agreement could not be reached. After the strike authorization vote and a series of frustrating negotiation sessions with the State System APSCUF filed an unfair labor practice on September 22nd. In their charge APSCUF argues that,

“The System has engaged in surface and regressive bargaining which…reveals that the System has not made a serious effort to resolve differences and reach common ground. Instead, by purposely setting up obstacles to reaching agreement, and in fact reneging on proposals which would have moved the parties toward an agreement, the System has demonstrated its intent to thwart the public policy of promoting labor peace through collective bargaining…Taken as a whole, the State System’s conduct has evidenced a desire to avoid agreement, in violation of its duty to bargain in good faith.”

Further reflecting on the System’s unwillingness to negotiate in good faith, APSCUF president, Ken Mash, noted that, “when we began, the State System immediately demanded we make cuts totaling $70 million. That is not bargaining. That is dictating… On most of the core issues, the State System continues to insist on cuts that hinder our ability to provide a quality education for our students.”  In a last ditch effort to prevent a strike APSCUF offered the State System $50 million in concessions, which was flat out rejected. The State System insisted on a minimum of $70 million of concessions.

“We are anything but ‘teaching machines'”

One of the core issues that the State System has refused to budge on is what amounts to a 20 percent pay decrease for adjunct/temporary faculty. Adjuncts, of course, are already at the bottom of the pay scale, and 60 percent are women, which means this is a gender equity issue. Making matters worse, the State System also wanted to eliminate the opportunity for adjuncts to be converted to tenure-track, which is one of the only Collective Bargain Agreements in the U.S. with this provision. APSCUF vice president and chair of the negotiating team, Jamie Martin, reported that, “at the bargaining table, they once said they wanted to turn our temporary faculty into ‘teaching machines.’

“We are anything but ‘teaching machines,” the APSCUF VP said. …(www.apscuf.org) “Our organization represents more than 6,000 faculty and coaches who have devoted themselves to providing the highest quality higher education for Pennsylvania students.”

Reflecting this dehumanizing view of adjuncts as teaching machines, it is not surprising that the State System has also been persistent in their demand that the percent of adjuncts allowed at PASSHE schools be increased from 25 to 30 percent. Situated in the context of a national average where roughly 80 percent of all faculty members across the country are adjuncts, the potential wealth to be exploited from part time education workers is surely not lost on State System managers.

As part of the bargaining unit APSCUF advocates for adjuncts from the perspective that when faculty members have stable, permanent jobs with a living wage, they are better able to focus on student needs and offer a better quality experience to the working class students of the PASSHE system.

Another outrageous example of PASSHE’s unwillingness to negotiate in good faith was their public claim that the union rejected a $159 million salary offer. Mash challenged this claim noting that a $159 million salary offer would mean that the average salary of professors in the state system would increase by $30,000 over the course of the three-year contract. Such claims, it seems, can only be interpreted as designed to paint professors as unreasonable and over paid and to turn students and the public against the union.

The State System’s idea of “modernization”

In addition to squeezing faculty members, the State System is also moving to a per credit tuition model as a way of raising tuition to generate revenue, which they call a pilot project. The first PASSHE school that adopted the per-credit tuition system was Millersville University. Millersville’s president, John Anderson, has indicated that it has been a huge success in terms of generating revenue.

Brogan says the move to a per-credit tuition scheme is called a pilot project is because there could be unintended consequences, such as a decrease in enrollment. In other words, the State System is aware that students might not like to be saddled with more debt, and are therefore testing to see how much more debt they can load students with before enrollment declines.

Because tuition is not a labor issue, APSCUF is not able to negotiate it. However, APSCUF’s official position, “confirms its opposition to per-credit tuition programs, and we reaffirm that the obligation to adequately fund public higher education rests squarely with the Pennsylvania General Assembly.”

Clearly, contrary to their public rhetoric and official mission statement, this is not a State System that puts students first. While they acknowledge that there are funding issues, their remedies rest on the back of students and faculty.

In fact, Chancellor Brogan implies that squeezing more work out of professors and more money out of students represents the path toward what he has called “modernization.”

Pennsylvania Republican State Senator Richard Alloway has commented, echoing former US Secretary of the Department of Education, Arne Duncan, that APSCUF is in the way of so called progress or modernization. He argued that the chancellor’s hands are tied and that at every turn he is blocked by the union, which therefore must be busted. This is the context in which the State System has refused to negotiate in good faith.

Democratic Gov. Tom Wolf took office January 20 2015 after defeating one term Republican Gov. Tom Corbett. Wolf built his campaign around the promise of restoring the $90 million that Corbett slashed from the education budget during while in office. Wolf represented the hope that the attacks on public education in Pennsylvania would subside.

Wolfe’s proposal to restore public education funding hinged on the imposition of a modest 4 percent tax on gas and oil drillers. However, these efforts were blocked at every turn by the Republican controlled state government and the System’s chancellor, a Corbett appointee.

The State System has pushed APSCUF into a strike because they refuse to budge on the redistribution of wealth imposed by Corbett. Instead of holding the frackers responsible for paying a modest tax to fund education, PASSHE is trying to further squeeze faculty and students. APSCUF refuses to allow the current managers of the State System to destroy public higher education in Pennsylvania.