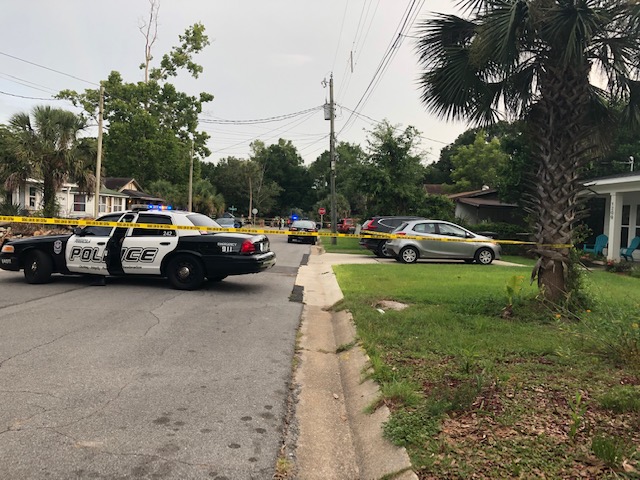 Scene of the shooting on July 5, Pensacola, Florida. Liberation photo.

On July 5 at approximately 4:20 PM, an officer with the Pensacola Police Department shot an unarmed man who has now been identified as Tymar Crawford in his mother’s yard, in front of his girlfriend and four children. Witnesses told Liberation News that at least six shots were fired by police, hitting him in his chest.

Neighbors lingered in the streets and nearby yards for hours after the incident, watching in horror and disbelief as the police searched the Crawford’s vehicle in what appeared to be an attempt to find physical evidence to justify this heinous act of police brutality. Some community members spoke with police, challenging them on how shooting an unarmed man six times in the chest could ever be necessary. One officer smirked at their frustration, and another took a combative tone while warning nearby neighbors to “calm down.”

In an effort to control the narrative surrounding this story, Pensacola Police Department spokesman Mike Wood promptly gave a brief statement to local news organizations. Per his statement, the PPD claims that two police officers attempted to pull Crawfrod over for a traffic stop after they allegedly smelled marijuana coming from his car. In the brief statement Wood said that Crawford did not stop but instead drove slowly through the neighborhood and around the block where he lives until he reached his home, allegedly tossing narcotics out of his vehicle on the way. Police claim that once he parked, Crawford struggled with and attempted to disarm a cop, at which time another officer fired on him.

Multiple witnesses contradicted this story, insisting in conversations with this reporter that Crawford had his hands up when he was shot to death by the police. Despite the presence of several eyewitnesses who contradict their official narrative, the police have fabricated an alternate scenario in an attempt to justify this atrocity, and the local media has reported that version of the events unquestioningly. Liberation News was on the scene and will continue to report on this developing story in pursuit of justice for the latest victim of state-sanctioned killing here in Florida.