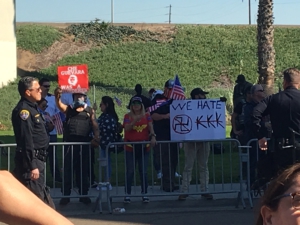 On February 3, white supremacists, neo-nazis and members of the so-called “alt-right” sought to bring their hate into a working class Chicano neighborhood known locally as Barrio Logan. They focused their visit on the community’s nationally recognized landmark, Chicano Park, home to a large collection of beautiful murals recording the history of the Chicano people and their heroes. This latest attack comes as no surprise to the people of Barrio Logan, whose resilience in the face of oppression is well documented in San Diego’s history.

After years of corrupt rezoning, segregation, and outright neglect, the people of Barrio Logan rose against the status quo and seized a plot of land beneath the I-5 freeway on April 22, 1970. The city had  reneged on a promise to build a park, instead choosing to build a parking lot for a California Highway Patrol substation in an already overpoliced and marginalized neighborhood. This led to the community retaking the land in a 10 day occupation that ended in an overwhelming victory for the people of Barrio Logan.  The land became Chicano Park, and the once barren pillars that served as an ugly eyesore for the people became the community’s canvas. Muralists erected monuments to history of the Chicanx people, detailing indigenous deities and revolutionary icons. It is specifically this history, rooted in revolutionary struggle and action, that irritates the racists and fascists who periodically threaten both the community and the park.

The organizers of this latest invasion call themselves “Border Town Patriots Inc,” a pathetic assortment of “conservatives,” neo-nazis, Minutemen and “Western chauvinists.” This was their second attempt to attack Chicano Park in the last six months, with their previous attempt garnering exactly five attendees compared to the over 500 who showed up in opposition. Their defeat on Feb. 3, labeled “Patriot Picnic 2.0,” was attended by roughly 60 bigots, many of whom were from places as far away as Washington state and Arizona. They spent their pathetic “picnic” (which was ironically devoid of food), arguing with each other and vastly outnumbered.

Nearly a thousand people including families, elders and protectors listened to speakers attacking white supremacy and the occupation of Kumeyay land. Organizations such as the Brown Berets de Aztlan, Union del Barrio, local Black Panther Party members, the Party for Socialism and Liberation, and Redneck Revolt organized a community based defense that maintained the peace and protected the people from armed reactionaries. Revolutionaries mingled within the crowd sharing food, stories and laughs with the people of Chicano Park, all the while containing the racists and fascists to the north side of the park. Ironically, one of the goals of the racist picnic was to raise the U.S. flag in a park that already flies a U.S. flag next to a veterans memorial, a fact that wasn’t lost on the people of San Diego who actually frequent the park.

Armed groups of bigots tried on several occasions to disrupt the festivities organized by the Chicano Park Steering Committee, only to be turned back by the overwhelming numerical superiority of the community. Joey Gibson of Patriot Prayer (the Portland Or. based organization whose rallies were attended by white supremacist murderer Jeremy Christian) was turned away by the collective power of local anti-fascists, berets and community members. After roughly two hours of complete failure, the bigots dejectedly left the park under police escort. By day’s end three people were detained, most seeming to come from the “patriot” side of the protests and the racists were laughed out of San Diego.

The Party for Socialism and Liberation was proud to serve alongside the people of Barrio Logan in their rightful pursuit of self-determination. Comrades, risking the real threat of physical violence and doxxing, stood shoulder to shoulder with local organizers to protect the murals and the historic park, demonstrating the solidarity blossoming between organizers locally. Organizers acknowledge that this is probably not the last time they will see this ragged group of xenophobes but are optimistic that the strength of the community will help them persevere. When these bigots return they will be faced with the collective power of a people well versed in protecting their community from vile nativism. Ultimately the coalition of organizations that coordinated this successful counterprotest  vowed to  keep in touch, demonstrating that in the face of racist attacks the community will always stand up and fight back!