The following campaign was initiated by the ANSWER Coalition, of which the Party for Socialism and Liberation is a member.

Sign and distribute the petition to drop the charges! 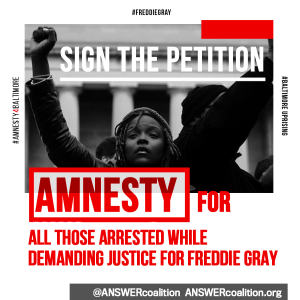 Spread this effort with the hashtag #Amnesty4Baltimore

“A riot is the language of the unheard”
— Dr. Martin Luther King, Jr.

An estimated 300 people have been arrested in Baltimore in the last two weeks. Many have been brutalized, beaten and pepper-sprayed by police in the streets, and held for days in inhumane conditions. Those arrested include journalists, medics and legal observers.

One individual arrested for property destruction of a police vehicle is now facing life in prison and is being held on $500,000 bail. That’s $150,000 more than the officer charged with the murder of Freddie Gray. Sign the petition to drop the charges on all those arrested.

The legal system has made it clear that they care more about broken windows than broken necks; more about a CVS than the lives of Baltimore’s Black residents.

They showed no hesitation in arresting Baltimore’s protesters and rebels, and sending in the National Guard, but took 19 days to put a single one of the killer cops in handcuffs. This was the outrageous double standard that led to the Baltimore Uprising.

It is because of that determined uprising that the six officers responsible for the death of Freddie Gray were indicted, as the state prosecutor herself admitted.

The ANSWER Coalition, the DCFerguson movement and organizations around the country are launching a national campaign for all the charges to be dropped on all those who have been arrested in Baltimore demanding justice for Freddie Gray.

This includes those charged with property destruction, looting or throwing rocks. The fact is that all rebellions against injustice have included such behavior, including the American Revolution.

In addition, the Baltimore police used the outrageous curfew to arrest many protesters.

The fact is that the mainstream media, the political establishment and most of all the justice system had previously ignored the massive peaceful protests for justice in Baltimore. It was the action of the young people that forced the whole world to pay attention.

Moreover, there is clear evidence that groups of white racists provoked the clashes on April 26, and that a preemptive militarized police deployment to the high schools on April 28 prompted that day’s youth rebellion.

The people of Baltimore were fully justified to rise up against racism, police brutality and oppressive social conditions. “No Justice, No Peace” is not just a slogan, but a principle — if the system can’t deliver justice, it can’t expect peace.

The quest for justice is far from over, and many brave young people and activists are facing heavy charges meant to intimidate and silence them in this next stage of the struggle.

People all over the country and the world must put pressure on the Baltimore Mayor Stephanie Rawlings-Blake to issue a general amnesty for those arrested.

If Mayor Rawlings-Blake admits that the people were right to be angry and frustrated; if she admits that this uprising woke up the world to the conditions in Baltimore; then she should drop the charges against them.

Broken windows mean nothing compared to the life of a human being!