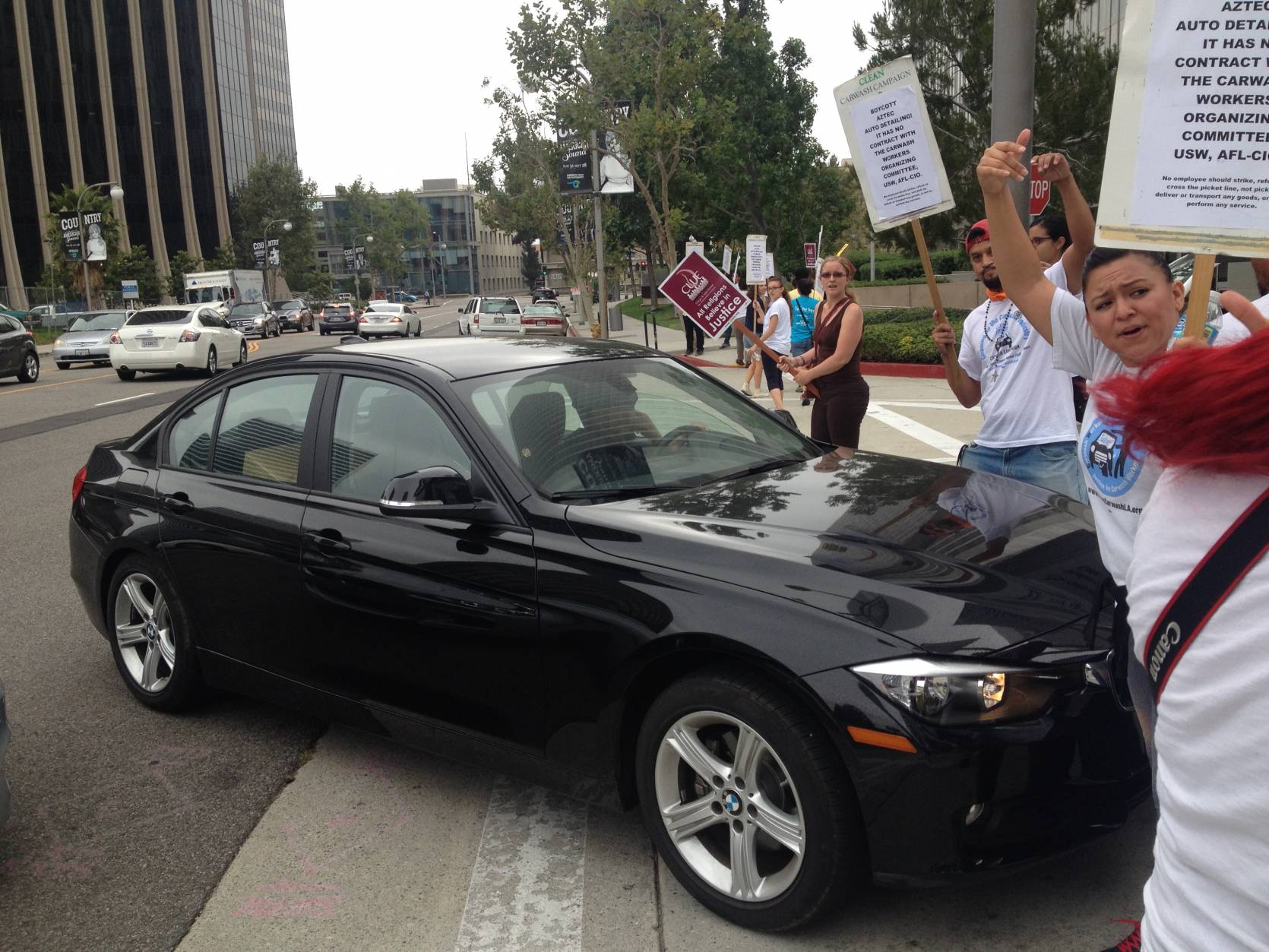 Carwash workers with the Community Labor Environmental Action Network (CLEAN) Carwash Campaign and supporters held a spirited picket across the entrance of a parking garage in a fancy office building in the Beverly Hills area, protesting the treatment of carwash workers at Aztec Auto Detailing inside the garage.

Porsches, Mercedes Benz and Range Rovers were backed-up down the street from both directions trying to enter the garage, as workers held the picket line chanting “if we don’t get no justice, then you don’t get no peace!”

Some angry drivers in luxury cars tried to violently drive through the line of workers instead of waiting for the picket line to reach the sidewalk, only to be stopped by a determined group of demonstrators who protected the picket line.

“If you’re mad, make sure to complain to Juan Marquez, head of Aztec Auto Detail; he’s responsible for this!” shouted demonstrators at angry drivers.

Juan Marquez has already been cited by the Division of Labor Standards Enforcement for tens of thousands of dollars in stolen wages, in addition to stolen wage claims with the Labor Commissioner over management stealing tips from the workers.

“He would take a ten dollar tip from a driver after the workers washed their car, then just wave it around in front of the workers. This is the type of person we’re dealing with” said Flora Rodriguez, a leader in the CLEAN Carwash Campaign.

She also reported other abuses on the job for carwash workers—the most inhumane of which, workers are not allowed to take bathroom breaks because it “wastes time” walking to the bathroom. The workers are forced by management, under threat of being fired, to urinate in plastic bottles and then pour it down the drain.

The purpose of the action was to put pressure on management to change its abusive labor practices and negotiate a contract, and to show the workers inside the power of the campaign and the community support that they have.

And the campaign is in a strong position—they have succeeded in winning contracts at over 20 carwashes in Los Angeles, and today’s action was a strong showing of what the campaign can continue to do to make the bosses’ lives difficult if they continue their anti-worker practices and wage theft.

The action ended after the morning rush hour with chants of “We’ll be back!”