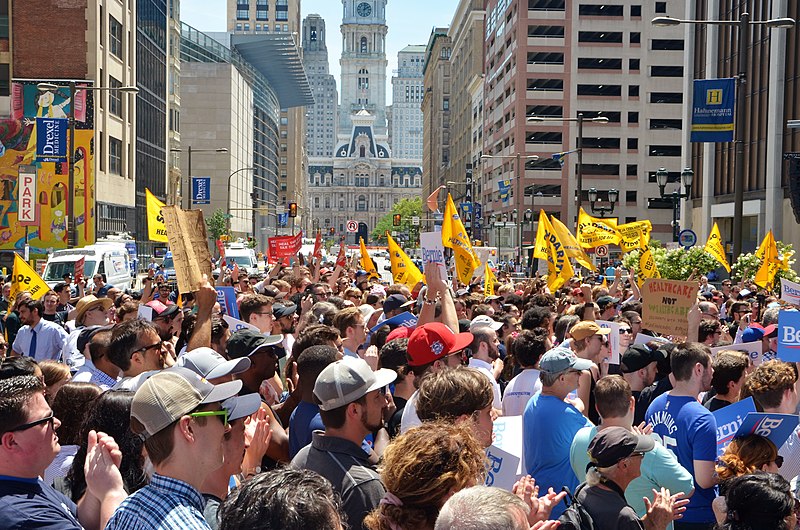 At the end of June, American Academic Health System corporation announced that they are closing Hahnemann University Hospital in Philadelphia, which they have owned since January 2018. The 495-bed facility handles 56,000 emergency room visits every year in addition to thousands of other patients. It also employs more than 570 residents and fellows who are not guaranteed a new residency following the closing.

A fierce labor and community fightback has developed to oppose this reckless act of capitalist greed. PASNAP (the union representing hundreds of Nurses at Hahnemann), Put People First PA, and other forces in the labor movement and those supporting universal healthcare have organized a series of well-attended actions. Bernie Sanders has brought national attention to the issue by speaking out against the closure and traveling to Philadelphia to participate in a demonstration.

A Philadelphia County judge ordered the hospital to stay open until a closure plan could be negotiated to mitigate the effects on hospital patients and employees. However, Hahnemann has already begun massively scaling down its services.

Non-emergency services and procedures were discontinued on July 12. Currently, only 30 patients remain in inpatient care. The maternity ward closed in mid-July, leaving more than 800 pregnant patients scrambling to make new arrangements to have their babies delivered in other already-crowded maternity wards. This increases the risk of complications for at-risk patients.

These are only a few of the many dangers posed to Hahnemann’s working class patients. The hospital’s closing is just another instance of the cruelty and neglect that are a fundamental part of capitalist healthcare. It is also a sign of the structural racism embedded in capitalism; two thirds of Hahnemann’s patients are Black and Latino, their communities facing disproportionate lack of access to healthcare.

The capitalist logic leading to Hahnemann’s planned closing has worsened the city-wide crisis in working class people’s ability to receive adequate healthcare. Other hospitals in the area, already experiencing long wait times for appointments, will have to take on thousands of new patients previously served at Hahnemann. They will have little time to make large-scale logistical changes required to provide timely and attentive care to all. Emergency rooms risk flooding with patients.

American Academic Health System is an affiliate of the for-profit Paladin Healthcare, LLC. Paladin’s stated mission is to “Fund and facilitate capital solutions for underperforming healthcare companies that can become stable and profitable enterprises.” It emphasizes hospitals in “densely-populated urban centers” like Philadelphia. Under for-profit ownership, Hahnemann’s success as a hospital has been measured by how much money it makes and its ability to operate has depended on revenue through the private healthcare market.

Paladin stands not only to reduce financial liability by closing the hospital, but to profit from its sale. Joel Freedman, the president of Paladin, has stated that he intends to auction the Hospital’s real estate and assets. Hahnemann’s location in Center City Philadelphia is a “gateway site” for gentrification in the city. Real estate executive Joseph Fetterman called the hospital’s closing an “opportunity” to continue the redevelopment of North Broad Street.

The coordination between healthcare and real estate executives is a dual attack on the working class. Healthcare resources are being eliminated to make way for the creation of unaffordable housing. Executives in both industries are profiting.

Hahnemann’s corporate owners’ ruthless actions reveals that the need for a well-organized healthcare system, serving the needs of all people, is subordinate to the profit motive of the tiny minority of people who own healthcare institutions. This is clear not only in the disregard for patients, but in the disregard for medical workers whose skills are essential to meeting patient needs.

Hahnemann employs more than 570 residents and fellows who have had to find new positions before the hospital closes. Many residents moved their families to Philadelphia to begin their work at Hahnemann and have been threatened with the possibility of being abruptly uprooted. About 55 medical residents moved from outside the United States and Canada. Their J-1 Visas require them to have an active contract with a hospital. If they fail to find a new placement, they will be kicked out of the country.

In searching for new residencies, many candidates have been hindered by Hahnemann’s foot-dragging on the release of Medicare-funded salary and administrative funding that came with their residencies, which only just now has taken place. This has made it harder to find a new residency because receiving institutions are hesitant to take on these costs.

In addition, 2,700 workers will be laid off unless there is a last-minute intervention to save the hospital. They will be responsible for finding new employment despite the working class’s immediate need for their skills.

Rather than being rigorously-trained in well-funded healthcare institutions and assigned where the needs of the people demand them, healthcare professionals are moved around at the whim of a profit-centered healthcare system to the detriment of the working people who need them.

This situation makes clear the need for a socialist system organized on the basis of the needs of all people, rather than the interests of a tiny handful of the extremely rich. Healthcare institutions should be built and funded to the extent that they can fully serve the needs of all people. The abundant need for healthcare workers should mean guaranteed employment where they are needed. This can never be accomplished under a system where healthcare is a commodity to be bought and sold for a profit.