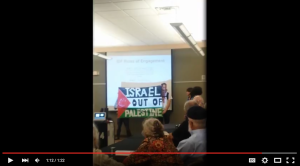 On April 14, the anti-Palestinian group StandWithUs, an organization that receives funding from the state of Israel, was hosted by Lobos for Israel at the University of New Mexico.

StandWithUs supports and helps create Zionist organizations like Lobos for Israel on college campuses in the United States to combat the Boycott, Divestment and Sanctions movement and to promote pro-Israel propaganda. Twice, when UNM students attempted to pass resolutions calling for divestment from corporations profiting from human rights violations in Palestine and at the U.S./Mexico, it was Lobos for Israel and Hillel that organized opposition to the resolutions.

The event featured two Israeli “Defense” soldiers who had participated in criminal invasions and massacres in Gaza, the West Bank and Lebanon. They have been touring the country with the StandWithUS Campus Israeli Soldier Tour.

The event was sparsely attended, partly because of a lack of interest in what occupation soldiers have to say and partly because there was virtually no public promotion for the event. Organizers must have known that in the city of Albuquerque, where pro-Palestine sentiment runs strong, publicizing this event would likely have brought a community demonstration down on its head.

On short notice, pro-Palestine students at the University of New Mexico decided to confront the IDF soldiers and expose Israel’s war crimes.

Two students walked in front of the presenter holding a banner reading Israel out of Palestine! They chanted, “IDF, what do you say?” while students in the back of the room responded, “How many kids have you killed today!” Campus police quickly escorted the students holding the banner out of the room.

Another student boldly stood up to the lies of the IDF soldiers, recounting his experience being bombed by Israel as a youth in Lebanon. He was also forced out of the room by police.

Yet another student, local Palestinian activist Mahmoud Thabet, was randomly plucked out of the crowd by the police and made to leave the room. “Funny how you can get kicked out of an event for being disruptive… and just for being a Palestinian-American male,” said Thabet.

In the commotion, an angered pro-Israel attendee began aggressively glaring at a young Palestinian woman. When the woman student asked the older man to stop looking at her like that, he responded by barking, “I can look at you however I want!”

“The cop got in my face, said I was a disruptive threat and put his hands on me to escort me out,” said the Palestinian student. “I was the student who requested that an old ass man stop looking at me so aggressively, and he [the older man] said ‘no.’ That’s harassment! Yet I got kicked out.

“[B]y the student code of conduct I have the right to freedom of speech. That was ignored. I also had the right to report the male for harassment but felt too unsafe by both the man and campus police to be doing so.”

The same cop was later seen hugging the man’s daughter who was recognized as a member of Lobos for Israel.

UNM campus police essentially functioned as hired security for StandWithUs, and assisted in the censuring and profiling of Palestinian students demanding justice. However, police repression can not stop the BDS movement in solidarity with Palestine!