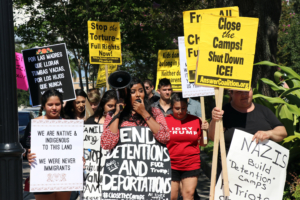 On Sunday, July 28, seventeen people gathered at the Manatee County Courthouse in downtown Bradenton to demand an end to US concentration camps for refugees and planned mass deportations of immigrants.

In the summer heat, they held signs that read “Liberation not deportation” and “Families belong together. Stop the inhumanity.” Several demonstrators shared the bullhorn and led chants.

“We’re out here today because we want to shut down the detention camps where they’re keeping the children who are coming over the border with their parents. What they’re doing, they’re taking away the kids from their parents, they deport their parents back and they keep these kids in these camps. Horrendous. They don’t have tooth paste, tooth brush, they’re sleeping on the floor. Also they’re not allowed to hug each other for support,” Caridad Guanche told Liberation. 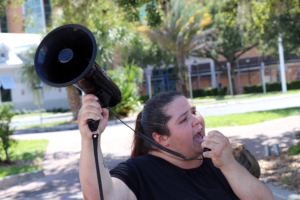 “A lot of these people are seeking asylum because they are in danger in their country,” said Guanche. “And if our country don’t be meddling and getting involved with their governments, then they don’t even come this way. We created that problem in those countries and those people are just trying to escape.”

Guanche organized the protest with Junior Salazar, a community activist who is running for the Ward 5 seat on Bradenton City Council. Salazar has been organizing locally against Trump’s racist attacks on immigrants since Trump’s presidential campaign.

Protesters started at the courthouse but soon walked down to the intersection at 9th Street W and Manatee Ave W where there was heavier traffic. People driving by often honked in support, giving thumbs up and power fists. Occasionally Trump supporters yelled in anger.

“Trump is saying, we really should be worried about immigrants, but let’s not focus on the fact that Anchorage, Alaska had a record 90 degree heat the other day, or the fact that even to live in the Bradenton, Sarasota area you have to shell out at least $1,000 a month, while you have retail employees who are struggling to make $12 dollars an hour, let alone $20,” said Manasota resident Anthony Pusateri. 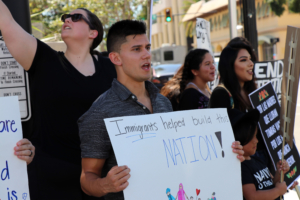 Martín Crosby, who drove from Tampa to attend the protest, told Liberation News that the treatment of immigrants is a personal issue to him because his parents are immigrants, but also that “it’s an issue that should be important to everyone and appeal to your greater sense of humanity.”

Tina Mendoza also drove down with a group of people from Tampa and told Liberation how Trump’s threats of massive ICE raids and deportations have a life-changing impact on her community. 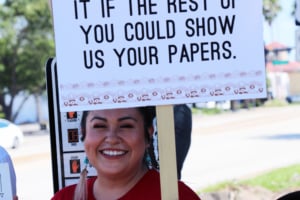 “At the end of the day it’s down to white supremacy, racism,” said Mendoza. “The biggest thing for us is, a lot of people don’t think about how for Mexicans or people from South America, the whole diaspora and Native Americans, these borders didn’t exist until colonialism. I spoke with a Hopi woman down in Arizona, and she said to me, ‘Your people, we have a history, our origin stories connect with yours, we just split ways a long time ago.’” Emily Bach, originally from Texas, told Liberation News that borders “allow a sense of nationalism to grow that isn’t beneficial to anybody, that makes an ‘us versus them’ mentality, when really there’s no such thing as a ‘them.’” She also talked about the comparisons between today’s concentration camps and other historical examples.

“I think that when we talk about the Holocaust and we say ‘never again’, that sort of genocide is the pinnacle of a pyramid that starts with things like jokes and harassment and racist tropes in the media. Allowing that to build is how things like this can happen on our border, so it’s important to stop that in its tracks, in the beginning,” said Bach. 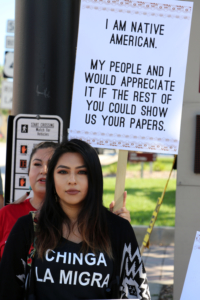 Local efforts to strengthen community and empower immigrants and refugees are continuing in Sarasota and Bradenton. Activists are organizing a movement and network of people to resist racism and promote solidarity. They hope to support local immigrant families who are being targeted by ICE and law enforcement, as well as to shift public attitudes and bring more community members to participate in the movement.

Earlier this month, Party for Socialism and Liberation held a forum on “Stopping the concentration camps” where community members came together to discuss the causes of the crisis and how to close the camps. PSL and Answer Suncoast then held a “Know Your Rights” forum about immigration law and ICE at the monthly Liberation Breakfast in Newtown. About two hundred people also attended Sarasota’s Lights for Liberty demonstration at the Unconditional Surrender statue, joining protests and vigils across the country.