Today caps a week in which elite politicians from both parties shamelessly used abortion rights as a political football to secure short-term gain at the expense of women’s equality. From the Senate to the White House to the campaign trail, the bought-and-paid-for representatives of the ruling class have made it clear that they have no principles on the matter.

Perhaps the most high-profile example of this was the bill unveiled by Senator Lindsey Graham. On Tuesday, Graham held a press conference where he announced he would be pushing legislation to ban abortion nationwide after 15 weeks of pregnancy. Graham pledged if Republicans, “take back the House and the Senate, I can assure you we’ll have a vote on our bill.”

Graham and other right wingers have long sought to make their anti-choice politics more palatable by cloaking them in the rhetoric of states’ rights. Roe v. Wade should be overturned, this right-wing talking point argues, because the issue should be handled on a state-by-state basis rather than at the federal level. As recently as this June, Graham said on CNN “states should decide the issue of abortion.” But as soon as he got the opportunity, Graham moved to impose harsh restrictions nationally. Whether it happens at the state level or the federal level, the thing that actually matters to politicians like Graham is that women lose the right to control their own bodies.

But for top Democrats, Graham’s bill was cause for celebration. An article in Politico titled “Lindsey Graham saves Biden’s big day” captures this attitude:

The Democratic Party elite is rooting for the most extreme anti-abortion, far-right candidates and proposals to prevail because they believe that this will help them in the mid-term election. Having abandoned nearly all of their campaign promises for progressive change that would benefit working people, Democrats have almost nothing left to campaign on other than the fact that their opponents are even worse.

For this reason, the Democrats have been paying for campaign ads to boost dangerous far-right figures running against more “moderate” Republicans in primary elections. One of these extremists, Don Bolduc, prevailed in his race this week. After the announcement of the Dobbs decision that overturned Roe v. Wade, Bolduc issued a statement saying, “As a pro-life candidate, I believe the Supreme Court made the right decision.” The Senate Majority PAC, a key Democratic Party campaign tool that spends tens of millions of dollars per cycle, supported Bolduc by running TV ads attacking his opponent Chuck Morse using talking points designed to energize Trump supporters to turn out to vote.

Bolduc prevailed by an extremely narrow margin of less than 2,000 votes, meaning that support from the Democrats could very well have made the difference in his victory. Bolduc is also a high-profile election conspiracy theorist, claiming that Trump was the true winner of the 2020 election (before reversing his position two days after the primary in an obviously fake attempt to appear more “moderate”). Attacks on abortion rights and attacks on the concept of democracy itself go hand-in-hand.

But perhaps most cynical of all is the Democratic Party’s continuing refusal to pass a bill legalizing abortion. The Democrats control both houses of Congress and the White House. If they were willing to eliminate the undemocratic “filibuster” rule in the Senate, then they could legalize abortion immediately without needing a single Republican vote. But instead, they are using the issue to fundraise and hoping that the threat of an even further curtailment of abortion rights will boost turnout in November.

The struggle over abortion rights is hugely consequential – is anything a more basic democratic right than the ability to control one’s own body? But even still, the politicians will only take abortion rights seriously if they are forced to. A mass, fighting women’s movement could galvanize all those under attack and turn the tide against the erosion of fundamental rights. 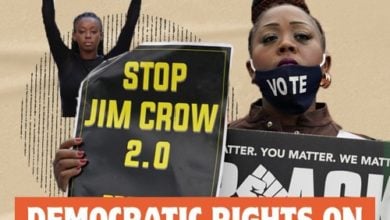