Joe Biden addressed the high-profile COP27 climate change summit in Egypt today, boasting that the United States is “racing forward to do our part” in the global effort to reduce carbon emissions. Biden touted his administration’s reentry into the Paris Accord and the environmental measures included in the Inflation Reduction Act, posturing as an example for the rest of the world to follow. But a closer look at the administration’s record reveals major failings.

It is true that the Inflation Reduction Act represents the largest sum of money to date that has been allocated by the U.S. government to fight climate change. Totaling $370 billion, the environmental-related aspects of the bill mainly come in the form of tax credits to companies involved in the production of renewable energy and the development of green technologies.

But these measures in the IRA are a weak substitution for what the Biden administration was initially pushing — a policy called the Clean Electricity Performance Program. Rather than offering subsidies and hoping for the best, the CEPP would have involved a concrete mandate for electricity-generating companies to reduce their emissions. Every year, they would be required to lower the amount of carbon they release into the atmosphere by 4 percent. Those that met that goal would be rewarded with subsidies, but those that did not would be penalized with a fine. This policy was projected to create an 80 percent renewable energy grid by 2030.

The CEPP was meant to be a centerpiece of the administration’s “Build Back Better” social program expansion, but its binding mandates were rejected by coal industry capitalist and Democratic Party Senator Joe Manchin and jettisoned from the package early on in negotiations. And in order to secure Manchin’s vote for the far less ambitious program included in the Inflation Reduction Act, Biden had to concede other measures that would open up tens of millions of acres of publicly-owned land to oil and gas drilling, and a side agreement was made to make it far easier to construct environmentally-devastating pipelines.

Lacking support from Congress, Biden portrayed himself at the COP27 summit as someone who was willing to use executive power to compel action on the issue. Ahead of his speech, the administration rolled out a new regulation that would require fossil fuel corporations to detect and repair leaks of methane — a type of gas that massively contributes to climate change. This rule is being imposed through the Environmental Protection Agency, whose authority to impose these types of limitations is constantly being eroded by the Supreme Court.

But the Biden administration has also recently demonstrated its willingness to use executive authority to enrich the planet-killing fossil fuel capitalists. In July, the administration rolled out a plan that could dramatically expand offshore oil drilling in the Gulf of Mexico and in Alaska. Under the most adverse scenario, 10 new leases could be offered in the Gulf of Mexico and one in Alaska, moving the United States backwards instead of forwards to clean energy.

What is truly needed to save the planet is a complete overhaul of production and distribution in virtually all sectors of the economy. The cost of such a transformation would be measured in the trillions, not billions, but workers do not have to be the ones to pay — the resources simply need to be liberated from the clutches of the ultra-rich who hoard society’s wealth and the trillion-dollar-a-year war budget. A great deal of this wealth should be used to underwrite the clean energy transition for the underdeveloped nations of the world in the form of climate reparations — a demand being raised with renewed intensity at COP27. It is truly remarkable that Biden would have the nerve to use the summit as an opportunity to lecture the world about the importance of taking action against climate change. 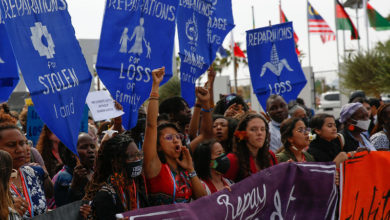