November 29 is the International Day of Solidarity with the Palestinian People. Observed since 1977 following the success of a United Nations resolution recalling the anniversary of the post-war partition of Palestine by imperialist powers, the day honors the decades long struggle of the people of Palestine to secure freedom and independence from imperialism and colonialism. Despite the traditional role of the UN as an instrument of the United States and its junior partners in maintaining imperialist domination over Palestine, there have been a number of notable victories secured in this arena by the Palestinian people, along with other oppressed peoples. The honoring of this day would not have happened were it not for the heroism and the resolve of the Palestinian people in the face of the vicious attacks of imperialism. It was won through bitter struggle.

All revolutionary and progressive people in the United States should honor this day as a lasting expression of the immeasurable contributions of the Palestinian people to the movement for a better world. As a movement which takes its principal aim at the Israeli occupation, the main outpost of American imperialism in the region, workers and oppressed people in the US share a common enemy with Palestinian liberation, one which ties the fate of both of our struggles by a million threads.

As imperialism’s crises continues to deepen every day, solidarity with Palestinian liberation becomes more and more essential. Riding off the wave of political crises shaking the upper echelons of the ruling classes in the core imperialist countries, Israel continues sharpening its criminal attacks on the people of Palestine, raising them to new extremes with the indispensable help of the US government through its billions of dollars worth of the most advanced instruments of war. Israel continues to expose itself as one of the worst violators of international law in as it massacres peaceful protesters in Gaza demanding the right of return, a right enshrined by resolution 194 of the United Nations, the very body which Israel and the US continue to utilize to hold Palestine under a perpetual occupation.

The Party for Socialism and Liberation expresses our full solidarity with the people of Palestine, and the various ongoing movements to bring mass attention to their struggle for emancipation, such as the international call for BDS (Boycott, Divestment, Sanctions), taking aim at the massive financial strength imperialism provides to Israel’s colonial project in return for protection of imperialist interests in the Middle East, or the Great March of Return still ongoing in Gaza. We support the right of return for all Palestinian refugees, an end to all forms of occupation and an end to the colonization of all Arab lands. 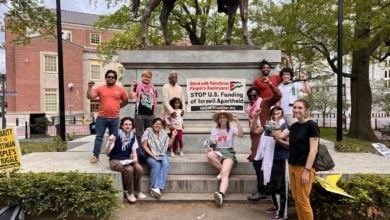