The Party for Socialism and Liberation sadly mourns the death of Puerto Rican hero and freedom fighter Rafael Cancel Miranda.

Miranda passed away earlier this month at age 89. He died in his home next to family and loved ones, after a rapid deterioration of his health due to heart complications.

His death was heartfelt by many generations of Puerto Ricans who showed up in the thousands and made long lines to pay tribute to their hero in a series of events following his passing.

Family and leaders of the Puerto Rican independence movement attended his funeral, which was held last week. Among the attendees was Puerto Rican freedom fighter and recently released political prisoner Oscar Lopez Rivera.

Knowing the end was near, Miranda asked for the flag not to be lowered to half-staff in mourning; instead he asked people to raise the Puerto Rican flag higher than ever. 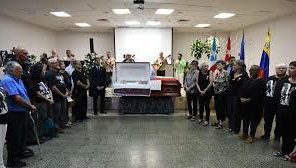 At the funeral, his coffin was draped with the Puerto Rican flag as a symbol of respect for the passing of one of its greatest patriots. Next to him, the flags of Cuba, Nicaragua and Venezuela were displayed as a reminder of his ardent anti-imperialist posture and solidarity.

Miranda, who joined the Puerto Rican Nationalist Party at age 15, was the last surviving member of the four Puerto Rican nationalists and freedom fighters who shocked the world and raised the Puerto Rican flag higher than ever on March 1, 1954. He, alongside the great Lolita Lebron, Irving Flores, and Andres Figueroa Cordero, attacked the chambers of the U.S. Congress to denounce Puerto Rico’s colonial status and to demand independence for the island.

The story goes that they entered the capitol building, walked calmly to the visitor’s gallery above the chamber while in session. Then Lolita gave the order, they unfurled the Puerto Rican flag, Lolita stood up and shouted “Que Viva Puerto Rico Libre” (Long live a free Puerto Rico), and within seconds they opened fire on the U.S. Congress.

Five congressmen were wounded in the attack, for which Miranda took complete responsibility. All four comrades were immediately arrested and the media and U.S. government launched a campaign to demonize the Puerto Rican independence movement. The four were convicted and given life sentences.

The actions of Rafael Cancel Miranda and his comrades were later protected by UN General Assembly resolution 1514, adopted in 1960, which unconditionally grants a colonized people the right for independence, regardless of the tactics the national liberation movement employs to expel the foreign oppression from its homeland. What these four Puerto Rican heroes did reflected the fury of the colonized Puerto Rican nation and every subjugated people that strives for a world free of oppression.

While in prison, Miranda remained militant and became involved in several prison struggles including leading prison strikes, forming alliances with prisoners of other nationalities.

During his time in Marion Penitentiary, he got the opportunity to meet and befriend fellow political prisoners Leonard Peltier and Herman Bell. Together, they helped organize work stoppages and even published several publications advocating support for prisoner struggles.

Miranda was finally freed by then U.S. President Jimmy Carter in 1979, only after decades of struggle by people in the U.S., the international community, and Cuba in particular when Fidel negotiated a prisoner-exchange with Carter.

Miranda was once asked of his actions and time in prison, to which he responded, “I was imprisoned for 25 years, but I was free.” After his release, he continued to struggle for the independence of Puerto Rico and to free all political prisoners. In particular, he fought tirelessly for the freedom of the Cuban Five as well as his compatriot Oscar Lopez Rivera.

More than 100 years since the U.S. invasion of Puerto Rico in 1898 and more than 60 years after the 1954 attack on the U.S. Congress, Puerto Rico remains an unofficial colony of the U.S.

More recently, the island is undergoing an escalating crisis. After being devastated by Hurricane Maria, the worst natural disaster in recorded history to hit the Island, Puerto Rico is still dealing with its aftermath.

The hurricane dealt a lethal blow to the island that was already dealing with widespread poverty, unemployment, and school closings as a result of the illegal debt crisis.

To make things worse, rebuilding efforts were set back by another major natural disaster, when a 6.4 magnitude earthquake hit the island this past January — the strongest earthquake to hit Puerto Rico in a century.

The effects of Hurricane Maria, the illegal debt crisis, and the earthquake are made worse by Puerto Rico’s colonial status as an “unincorporated territory of the United States.” For this reason, the spirit of Rafael Cancel Miranda lives on for many Puerto Ricans on the island who today are fighting back and calling into question Puerto Rico’s political status as a colony of the U.S.

His life-long dedication to the struggle serves as an inspiration for the next generation of activists and revolutionaries to pick up the torch for independence. Last year’s victory that led to the ouster of sexist and bigoted former governor Ricardo Rossello and mobilized half a million Puerto Ricans, and the recent protests in response of the failed response attempts after the earthquake, both point to the basis for a resurgent anti-colonial struggle.

The PSL honors the legacy of Rafael Cancel Miranda and sends our regards to the family and his comrades during these difficult times.

‘You can’t call dead those who die fighting for life’

Venezuelan revolutionary folksinger Ali Primera once wrote, “You can’t call dead those who die fighting for life.” Rafael Cancel Miranda’s last act truly embodies this statement. Knowing his death was nearing, he promised his family and loved ones that he would wait until after March 1, the anniversary of the 1954 attack on the U.S. Congress to part. So much was his will power and devotion for Puerto Rico’s independence struggle that he fulfilled his promise and died one day after the anniversary, on March 2.