On September 3, Kim Davis, the County Clerk of Rowan County, Kentucky, chose to go to jail for contempt of court rather than issue marriage licenses to gay couples requesting them in her jurisdiction.

Davis claims she chose to use her position of power to deny an oppressed minority their legal rights because her personal opinion (based on her interpretation of Christianity) is that civil marriage should exclude same-sex couples. She went further by prohibiting any of her deputy county clerks from issuing marriage licenses as well. When she was sued to force her to perform her job, she appealed and her lawyers sought an emergency stay, which the Supreme Court then refused to hear.

She is still attempting to appeal in order to delay issuing marriage licenses for as long as she possibly can. Most recently, she has requested that Kentucky Gov. Steven Beshear grant her an “accommodation” allowing her to not issue the licenses to same-sex couples, while permitting other clerks in her office to issue the licenses.

Who is footing the bill?

If Davis were like any other worker, she would not personally have the financial and legal resources to keep her job while at the same time fight a legal battle all the way to the Supreme Court. However, Davis has been lavished with outside support, as a 2014 press release from the far right law firm Liberty Counsel makes clear:

Liberty Counsel Founder and Chairman Mat Staver is urging people in states affected by same-sex unions to “Stand your ground. Do not voluntarily resign your post when confronted with this intolerant agenda [referring to marriage equality laws- Ed.]”

Staver made these comments after several magistrates in North Carolina resigned because they refused to preside over a same-sex marriage. “I appreciate the conviction of these magistrates, but rather than resign they should remain at their post. Liberty Counsel will represent them, but once they resign there is not much we can do to help,” said Staver.

“Where would the Civil Rights movement be if Dr. Martin Luther King, Jr., voluntarily went home when he faced opposition? Where would we be today if Rosa Parks had voluntarily moved to the back of the bus? The quest for religious freedom was the reason American was born. We cannot voluntarily give up this unalienable right,” concluded Staver.

Liberty Counsel is representing Kim Davis for free. Liberty Counsel can afford to do this because it uses high profile cases like this one to fundraise for. As a result this self-described “grassroots, non-profit” rakes in piles of donations while keeping its almost exclusively anti-LGBTQ campaigns in the public eye.

Examples of Liberty Counsel’s activism include: using their team of lawyers to win legal cases defending the use of so-called “reparative/conversion therapy” on LGBTQ youth; striking down workplace discrimination laws protecting LGBTQ workers; nullifying hate crime laws which protect LGBTQ victims of violence no to mention providing attorneys to defend the country’s most extreme anti-LGBTQ activists over the past three decades.

The capitalist media never frames the actions of groups like Liberty Counsel in terms of how they negatively affect working people. If they did, the public would see right through the lie that Davis and her lawyers are trying to promote: namely, attempting to characterize Davis as a helpless “victim of religious persecution” by both the government and the LGBTQ community. Nothing could be further from the truth.

In fact, by deliberately misinterpreting the 1993 “Religious Freedom Restoration Act,” the far right has recently succeeded in eliminating hard won rights for women and LGBTQ people. For example, in 2014, owners of a for-profit corporation, Hobby Lobby, won a Supreme Court case, using the seemingly ludicrous claim that an inanimate object (the Hobby Lobby corporation) had all the same legal and Constitutional “rights” to religious freedom of an actual human being!

Not surprisingly, the U.S. Supreme Court found in the bosses’ favor, which set legal precedent for a corporation, as an inanimate entity, to itself have “individual religious beliefs” which the federal government must then protect as “equal to” to those of real human beings.

Returning to Davis, the more often she and other anti-working class “activists” repeat the lie that they are somehow victims, the more they potentially dilute working class support for actual victims of religious intolerance and persecution.

Take for example, how confusing Liberty Counsel’s most recent press release must appear to those unfamiliar with the political agenda of this bigoted organization:

Liberty Counsel’s Mat Staver made the following statement: We will continue to stand with Kim Davis and others who assert their conscience. Kim joins a long list of people who were imprisoned for their conscience. People who today we admire, like Rev. Dr. Martin Luther King, Jr., …Each had their own cause, but they all share the same resolve not to violate their conscience. We can only hope future generations look back on this moment with disgust at what happened and admiration for a woman who may be incarcerated but whose conscience remains free.

Huckabee jumps on the bandwagon

Although Kim Davis is a Democrat, Republican Presidential candidate, Mike Huckabee was only too anxious to throw the full weight of his political campaign behind her, at least as long as exploiting her case gives his own election campaign some political relevancy.

Huckabee is using social media to promote Davis, as a supposedly persecuted religious martyr, as expressed in his hashtags, #FreeKimNow“ and #ImWithKim.

Huckabee has gone even further, announcing on his campaign website, “I’m holding an #ImWithKim Liberty Rally on Tuesday, September 8th at the Carter County Detention Center in Grayson, Kentucky at 3:00 PM ET.”

What effect will the anti-LGBTQ rhetoric of Huckabee and Liberty Counsel have on working class unity? What sector of society are they reaching out to and mobilizing with their bigotry? It would appear their target audience is homophobic and transphobic. Are such bigots likely to act out violently against imaginary “threats” and non-existent “rivals?” We have already seen this in response to the violently anti-Latino rants of Republican candidate Donald Trump.

“Donald Trump was right, all these illegals need to be deported,” said one of the two, self-described Trump supporters, after nearly beating a homeless man to death in Boston. They said they were inspired to act after hearing Trump’s racist comments against Latinos.

The day after Davis went to jail, racist extremist Michael Peroutka began holding rallies and urging the crowd to “not obey Judges’ laws, you can go free Kim yourself now!” Who is Peroutka is appealing to? Well,  he also believes the racist Confederate flag stands for “justice, decency, integrity and honesty.”

Unity is the key

The ruling class fears working class unity, as is now being expressed in the overwhelming support for marriage equality, because such unity is the most dangerous threat to the ruling class’s tenuous hold on power. The most effective resource we have to counter anti-working class actions like those being carried out by Liberty Counsel and bigots like Davis, Huckabee and Peroutka, is for working people to continue to unite, organize and defend our hard-won rights. 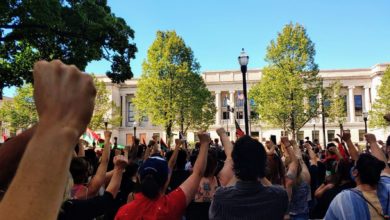