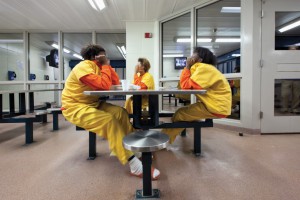 In a new bombshell of a report, “The Sexual Abuse to Prison Pipeline: The Girls’ Story,” it was revealed that in many states nearly 80 percent of the girls in the juvenile justice system are victims of sexual or physical abuse. In Oregon, the figure is 93 percent; in California, it is 81 percent, with 40 percent of those young women having been raped at least once and 45 percent having been burned or beaten.

These figures are a window into a nationwide pattern where young women, thrown into the streets by the social problems of our society, are criminalized simply for trying to survive. Of course, once you are in the juvenile justice system, the chances of entering into the adult justice system are greatly increased. Unsurprisingly, a disproportionate number of these girls are Black, Latina, and Native.

This is another example of how mass incarceration in the United States is not truly about stopping crime but about containing the explosive social problems that exist in the U.S. capitalist system.

The data also reveal that LGBTQ or gender non-confirming youth make up 40 percent of the girls in the juvenile justice system.

The report explains that the “most common symptoms of abuse” including truancy, running away and substance abuse are also the most common crimes for which girls are arrested. There is no other way but to put it bluntly: Our society is racked by sexual violence against women and girls; when many low-income girls do whatever they need to do to survive this abuse, they are frequently criminalized or thrown in jail where next to nothing is done to help them.

The report notes that “the system itself typically overlooks the context of abuse” when deciding whether or not to arrest a girl and that the “juvenile justice system typically fails to address, and often exacerbates trauma that caused girls to be there.”

This is part of a general trend in the criminal justice system. For instance, as I note in the book Shackled and Chained: Mass Incarceration in Capitalist America, significant numbers of prisoners suffer from substance abuse and mental health issues, yet prisons do little or nothing to address these issues. Our prisons are filled with the social fall-out from the grinding oppression and exploitation of poor communities.

What this report reveals truly should be a national scandal. Poor girls, disproportionately of color, are being brutally abused and criminalized for it. There could not be a clearer example of how the problems of our society have deep roots in the oppression, bigotry and exploitation that we live with daily. Even much-needed reforms to the system can only scratch the surface. Solutions designed to deal with symptoms not roots will never truly take hold.

We have to embrace the definition of radical, going to the root, in order to uproot the patriarchal rape culture that births this kind of abuse. That means looking directly at our system of class society. We must demand that we end the criminalization of girls who are simply surviving in a world that more often than not is stacked against them. We also must demand that we take the steps necessary so no one is ever victimized by other people or the state like this ever again.