Republican tax reform: All power to the billionaires! 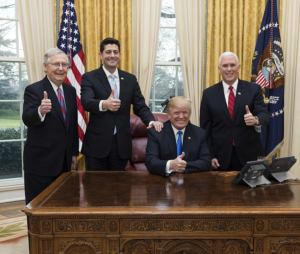 A Republican dominated Congress has just approved a massive rewrite of the current tax code that will end up giving approximately $1.5 trillion dollars in tax cuts to the wealthiest corporations in the United States over the next 10 years. In order to make up this huge loss of revenue to the federal government, Congress will dramatically increase the tax obligations of working people.

This is the most significant transfer of wealth since Reagan initiated his tax plan in 1986. Whole communities will be transformed and devastated, income inequality will continue to deepen, and corporations will get even wealthier. This is the world the U.S. Congress is seeking to create.

One would expect such a massive change in our society to have been accompanied by a long and thoughtful process filled with debate and analysis. However, none of that occurred as this current plan materialized.

Instead, the plan was  written and approved in record time, mostly behind closed doors accessible only to lobbying firms and wealthy donors. Nearly 500 pages were written and then voted on hours later, before any of those voting even had time to read it. Yet there is method to the madness. Had the public the time to read and analyze this document, the plan would have most certainly died as people realized how seriously they would be hurt. Instead, it needed to be rammed through with a minimum of oversight or checks and balances from the public. It was the only way it could win approval. It has been a truly undemocratic process.

Take a moment to consider the changes to the Affordable Care Act a.k.a. Obamacare.  The tax plan will cease to require individuals to be insured under it, further destabilizing the marketplace for more affordable healthcare. Many millions of people depend on insurance plans mandated under the ACA to prevent total financial ruin in the event of  a serious health problem. These people will suddenly be uninsurable or will be forced to pay for health plans which provide even less than the bare minimum of care. While on the subject of healthcare, Congress has decided to end the Children’s Health Insurance Program (CHIP). This means that 8 million children, people who are too young to afford healthcare, will be forced to live, and die, without it.

On the other end of the spectrum are the corporations which make billions of dollars in profit every year. They will enjoy a tax cut from roughly 35 percent  to 21 percent, one of the largest in recent history, resulting in a budget shortfall of nearly $1.5 trillion. Keep in mind these are corporations which already barely pay taxes at all, such as Apple Inc, which is actually an Irish, not a U.S., company. Due to their being domiciled in Ireland they enjoy a 0 percent tax rate so long as they keep their money abroad. What little funds they do have in the U.S. will now be taxed at a significantly lower 21 percent.

This is to say nothing of the complex web of LLCs, Cayman Island funds, and special investment vehicles that corporations utilize to evade and avoid taxes entirely. Currently, nearly half the wealth in the United States is owned by three men and yet this is still not enough money. More must be taken from the working class through this vicious tax plan to feed the desperate hunger of capital.

GOP ok with increasing deficit if it means cutting services, increasing taxes on the poor

The massive reduction in revenue will increase the budget deficit, something the GOP has long railed against. Why are they so willing to reduce federal revenues and increase the deficit? Because it means, ultimately that under their own budget rules, they will ultimately have to cut even more services in an attempt to balance the budget.

The truth is that the Republican Party has no interest in benefiting the many millions who live in the United States. When they say “make America great,” “America” to them means the ultra-wealthy. Their role today is to empower and expand the interests of U.S. capital. Having successfully robbed children of healthcare, Trump looked back at a crowd whose combined net worth dwarfs that of  most countries and called them “Very, very special people.” While Trump exalted in these people who had “worked for years” to accomplish this massive gift to corporations, he ignored, of course, the many millions who must work for years to just have enough food to survive.

Is the problem “spineless” Democrats?

However, let’s not forget the Democratic Party. It would be wrong to not lay blame at their feet. As the recent defeat of their anointed candidate Hillary Clinton demonstrated, they are, and always have been, a party of the banks, of the warfare state and of the capitalist class. Some headlines were made in which the Democrats hinted at possibly threatening a government shutdown if some of their demands were not addressed in the tax plan. This was a much loved strategy of the Republican Party during the Obama Administration and so a precedent had been set. At the last moment the Democratic Party backed down citing “promises to talk” by the Republican Party. Having won nothing substantial or binding, the Democratic Party quickly backed down clearing the way for the largest transfer of wealth in U.S. history.

Some on the left bemoan the “spinelessness” of the Democrats, yet to say this is based on the incorrect belief that the Democrats desire to see the tax plan fail because they disagree with its aims. Nothing could be more false. The Democrats deeply want to see tax cuts for the wealthy pass because their billionaire donors also demand such cuts and reforms. However, they wanted this accomplishment to occur under a Democrat controlled Congress wherein they could take credit. This would have been a valuable feather in their cap ensuring still greater contributions from the wealthiest of society. Instead they had to watch the Republicans achieve this and so we witness their feigned outrage.

What can we do?

Why is this happening and what can people like you and I do about it? Progressive political movements have reached a low point today because of their loyalty to the Democratic Party, a party which is expert at coopting radical and progressive demands to ensure such demands remain toothless. No one identifying as “progressive” can truly believe that a party backed and funded by Goldman Sachs or Walmart actually has the interests of working class and poor people in mind.

The sooner the people realize that the Democratic Party represents a graveyard for social movements the sooner we can begin the work of building a truly radical, progressive, and socialist party that will be able to effectively challenge and defeat the powerful ruling class interests that have seized control of our Congress. However, so long as we look to the Democrats for victory, we will be disappointed.

The Republican tax plan represents a huge acceleration of income inequality in our time but it is not inevitable. Social movements have repeatedly challenged and defeated power structures throughout human history. Today is no different. At a time when the stakes have never been higher, when the class lines have been so clearly drawn, when the world desperately needs a radical socialist vision, we cannot afford to be still and silent. The people must unite, must fight back, must lose their faith in the Democratic Party, and build a revolutionary party that is truly of, by, and for the people.