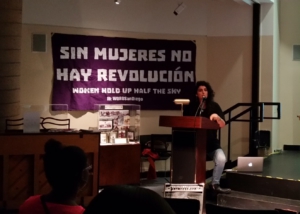 Trump’s naked racism and the deepening crisis of capital has spurred a surge in revolutionary consciousness and action among the working class and colonized people within the geographical borders of the United States. Women have played a leading role in every revolutionary movement in history. Here in the very belly of the beast we see today that transwomen and gender nonconforming comrades have taken their rightful place shoulder to shoulder with their sisters on the front lines.

On March 28, San Diego’s chapter of WORD (Women Organized to Resist and Defend) joined with the Party for Socialism and Liberation to hold a public forum titled “Women of the Revolution: Leading the Struggle.” Approximately 50 people attended the event at the Malcolm X library in the working-class Valencia Park community of San Diego, exceeding the organizers’ attendance expectations. They came to hear three revolutionary women of color—Erikka Thorpe, Anabel Arauz, and Sophia Armen—speak about their experiences in the fight against sexism, colonialism and every other head of the hydra that is parasitic capitalism.

San Diego WORD chair Lola Ruiz opened the panel with a discussion of International Women’s Day and its historical roots in the socialist movement of the early 20th century. Because the educational system under capitalism exists to produce compliant workers, not to educate, some members of the general public in the crowd may have been surprised to learn that in 1917, the Women’s Day strike for “Bread and Peace” was a turning point in the Russian revolution that led to the formation of the world’s first socialist workers’ state, the USSR.

Several times, Ruiz had to pause for spontaneous cheers and applause from the crowd in response to her calls for the appropriate valuation of women’s labor, for white women to respect the leadership of women of color, and for immediate, militant action against the patriarchal capitalist state.

Of the panelists, Sophia Armen spoke first. Armen is an organizer with SouthWest Asian/North African Alliance. The SWANA Alliance reject terms such as “Middle East” or “Near East” because they define an entire diverse region purely in terms of its location relative to Western Europe. Armen’s remarks started with a discussion of the way that anti-SWANA racism within the United States is one component of a colonial capitalist system whose “guns are pointed inward … in the same way that they are pointed outward.” Racialized bigotry, religious bigotry, and gender bigotry are individual moving parts in a machine whose function is the extraction of labor and capital from working people here and abroad.

Next, Armen reminded the assembled community that women do not need to be “given the mic” or “brought to the front” of the struggle against oppression; rather, women—particularly women of color—have always been pushing for their own liberation and the liberation of all exploited people, have always been at the head of the movement. It is only the forces of sexist revisionism that have attempted to obscure their leadership.

Armen ended her remarks by considering some of the practical realities of building a revolution. She reminded the audience that “the real revolution is what happens between rallies,” that is, the community building and trust amongst revolutionaries. “You can’t be comrades if you aren’t friends,” she observed. But these were not just feel-good platitudes without real substance. She also pointed out that it takes real labor to build love and trust.

Unfortunately, Armen pointed out, the U.S. left is not immune to sexism and other regressive attitudes within our own ranks. If we are to resist the corrupting influence of capitalist ideology on our own organizations, she reminded the assembled listeners, we must honestly practice criticism and self-criticism to constantly improve ourselves and the way we relate to our comrades.

Erikka Thorpe, a founding member of San Diego’s Black Female Advisory Board spoke next. Thorpe is a revolutionary scholar of Women’s Studies, who is dedicated to bridging liberatory scholarship with the ground-level resistance struggles of the working class.

She opened their talk by acknowledging that as a queer Black woman, academic degrees function as an “authorization” to be taken seriously when speaking about her own lived experiences. This is an authority that the ruling elite do not afford most of the oppressed and exploited.

Many in the audience may have held assumptions about the academic left as a lofty ivory tower where privileged white men discuss what is best for the working class with a lot of ten-dollar words but won’t get their hands dirty in the actual struggle for national liberation. And it is true that right now, the universities are a stronghold of privilege. But as the audience heard about Thorpe’s experiences organizing for justice, it became clear that when working-class members of colonized nations seize access to the academy, those theories are put into the hard practice of revolutionary action.

As a revolutionary mother and scholar, Thorpe has fought hard to get young people of color access to educational opportunities that speak to their own experiences and to the history of their own people. For instance, she did this while working with Olugbala Academy to bring culturally responsive curricula to elementary school students and with the Young Women’s Studies Club to bring women’s studies curricula to local high schoolers.

Thorpe never passes up an opportunity for principled, organized militant action against injustice. When Dick Gonsalves, a police officer in El Cajon (a small city outside San Diego), murdered Alfred Olango, an unarmed African man, Thorpe was leading chants and marches in protest. When the “International Association of Chiefs of Police” held a convention in San Diego, Thorpe and several other organizers marched to the convention center and demanded the police be held accountable for their crimes.

Beyond their active repression of Black and Brown communities, another of the many crimes committed by the racist police in this country is their refusal to investigate or prosecute crimes that victimize those communities. Thorpe reminded the assembled listeners that 64,000 Black women are missing right now in this country, and that the proportion of missing persons who are Black or Brown is far greater than the proportion of the general population. Yet the corporate news media only seem to report it and the police only seem to investigate it when the victim is white and affluent. If working people want justice, we must build our own power structures to serve our own interests in opposition to police and courts that exist to serve the interests of wealthy bosses and politicians. That’s a job Erikka Thorpe was born to do.

Next, Anabel Arauz was introduced to the crowd. The crowd gasped in outrage several times as she recounted how she was recently fired from her job as a union organizer by corrupt union leader Mickey Kasparian. After several women stepped forward to expose Kasparian’s sexual harassment and workplace intimidation, Arauz began to speak out in her workplace in solidarity with Kasparian’s accusers. She herself had heard his remarks and seen his behavior firsthand and knew that the accusations were true. Despite having been named “Woman of the Year” by an assemblywoman and “Organizer of the Year” by the Labor Council, Arauz was first demoted for speaking out and finally fired by mail just three days after she refused to formally denounce the women who exposed Kasparian’s harassment.

Arauz’s union, the UFCW, has no women in leadership positions. It has no accommodations for working moms. Labor unions are a powerful check against the power of the bosses; rank and file workers must play an active role to make sure that the elected union leadership represents the needs of the membership.

Arauz echoed all of the women who spoke that evening when she said, “All women are fighters, because they all have to fight for respect and simple survival under patriarchy.” She is a single mother of three and veteran of the UFCW supermarket strike of 2003/2004—no stranger to hard work and sacrifice. At the closing of her talk, Arauz said, “[Kasparian] took what I love the most, which is organizing workers, but that just puts more of a fire under me to fight this revolution.”

One thing is certain: these powerful women on the front lines put that same fire under every assembled listener. And it will burn the way to victory and liberation for working people everywhere.