By Partnership for CIvil Justice Fund 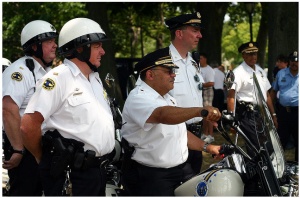 Ramsey, who was also recently brought in as a consultant for the Ferguson PD after the unrest in that city, has a record marked by excessive force, false arrests, and complete disregard for constitutional rights.

“If the President’s idea of reforming policing practices includes mass false arrests, brutality, and the evisceration of civil rights, then Ramsey’s his man. That’s Charles Ramsey’s legacy in D.C.,” said Mara Verheyden-Hilliard, Executive Director of the PCJF. “President Obama should immediately rescind his appointment of Commissioner Ramsey, who is a mass violator of civil rights and civil liberties.”

Carl Messineo, PCJF Legal Director, stated: “For civil liberties advocates, Chief Ramsey became synonymous with militarized and repressive policing. If this task force is under his command it does not stand a chance of substantially changing the status quo. Keeping Ramsey as the leader of the task force will demonstrate that President Obama is only seeking to provide window dressing rather than to create meaningful reforms.”

During his tenure as Chief of Police in Washington, D.C., Ramsey implemented, oversaw and deployed a militarized policing force including against peaceful protesters, engaging in mass false arrests, brutality and evisceration of fundamental rights. He ultimately cost the city tens of millions of dollars for civil rights violations as a result of lawsuits brought by the PCJF on behalf of more than 1,000 people.

The DC Council held extensive hearings on police misconduct under his leadership, resulting in major reforms restricting his illegal tactics and policies, which were enacted as the First Amendment Rights and Police Standards Act.

By the time Mr. Ramsey left Washington, D.C., it was in disgrace and with a complete repudiation of his policing style, policies and tactics