On the evening of Aug. 31, community members gathered at Meadowview Park in Sacramento, Calif., to commemorate Black August. The program opened with a Yoruba proverb and was followed by a presentation by Black August Organizing Committee Chairman Musa Mat’a.

Mat’a described his reaction to the May 2, 1967, armed visit to the state capitol by the Black Panther Party: “Those things gave us backbone. Especially us young Blacks. It gave us serious backbone. We no longer really listened to any type of authority, we were rebelling. George [Jackson] called us the lumpenproletariat. We didn’t have no politics, but we were handling our business.”

Mat’a added that after almost 45 years, Cloud is in Tracy now and going through what many here have been through. In a brief statement over the phone, Cloud said, “I just called to let y’all know that we just broke our last semi-fast. … Can’t stop, won’t stop.” 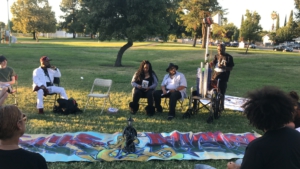 “He has 45 years in. He’s been in since he was a 17-year-old child. That means nothing to the prison administrators, that they have kept a kid since he was 17 until now he’s an old grey man. It’s not like he has a bunch of bodies on his [record], its just his politics. For [most of] the past 40 something years, he hasn’t even been in general population. He made general population in 2012 after being in the SHU. They still have him jumping through hoops, even though they have a Youth Act that says let those children go home who they brought to prison under 25.

“He is just another in the line that we have to step up and make them honor their laws. We have legislative laws but they turn it around and leave it up to Parole Board Discretion. And that’s one of the fights we have to take up. …”

The origins of Black August Resistance

“There is another brother here who did 40 like me.

“They had us in lockups without rules violations, just on the strength that we didn’t bow or kowtow. We are not unique. Prison is full of us. And that is what I want to get the community to understand. This is not an aberration here. They take us and warehouse us and give us dumb excuses every year. Just walk all over us. Then you look up one day and say hey ‘I’ve been here four decades.’ Then they give you a paper that says you should have done 14 years. …

“Khatari was the catalyst for BA. In ’79 instead of taking the first (for Khatari Gaulden), seventh (for Jonathan Jackson, William Christmas, James McClain and Ruchell Magee), and the 21st (for George Jackson), we took the whole month and called it Black August. And we added W.L. and the 13th of August, which is really a representation of January 13th when they murdered W.L.

“We call them the Flea days. On those days, we intensified whatever activity we had been participating in the rest of the month. On those four days, the first, seventh, 13th and 21st, we intensified it. We put our TVs under our bunks, we read books. We didn’t go to the canteen. …

“Because the first [Black August] we had in 1979 coincided with Ramadan, we wound up using their dietary thing of not eating during the day. The first BA we had, San Quentin actually assisted us. But when it got out the next year that them wasn’t Muslims out there, they shut it down and commemorating BA became an offense to take you to lockup.

“So that was one of the serious things we had to go through and respond to for this whole 40 something years of having BA. You have to respond to the powers-that-be in the proper way, because they have their mechanisms to shut you down when they want to. They put you in those little funny cages they had us in, just to make you try to toe the line. Their whole thing is to break you. They want to make you submit. And not just you personally submit, but to submit so that those others out there can see that they made you submit. So that they won’t pick up the banner of resistance. That is one of their flawed thinkings because them murdering W.L. and George is what made most of us pick up the banner of resistance. We were street hustlers, lumpenproletariat as George called us. You couldn’t put no book in our hand, we were about our paper. But when we saw them murder W.L., Jug, Alvin and them, seen them murder George, we said: ‘Wait a minute. Them dudes weren’t even causing no ruckus, we cause ruckus everyday. So what are they gonna do to us? … ‘

“So when we started taking on the lessons of George, W.L. and them, Jake Lewis and them, they said, ‘Wait a minute, what are we going to do with these kids.’ Because that’s all we were then was kids. We grew and matured inside unfortunately.

“That’s why I’m out here today to say: We are going to stop our children from having to grow and mature inside a prison cell. They can do it out here, they don’t need to support the Prison Industrial Complex.

“I’m 72 years old and I don’t know how many more times I’m gonna put my feet in front of the other, but while I’m doin it I’m going to be pushing that line.”

The night concluded with presentations from Anti Police-Terror Project Sacramento about community first aid, and from Yisrael Family Farms about the revolutionary impact of urban farming. The Sacramento BAOC closed the program by reminding folks that Black August events building solidarity in resistance to the Prison Industrial Complex will continue throughout the year.