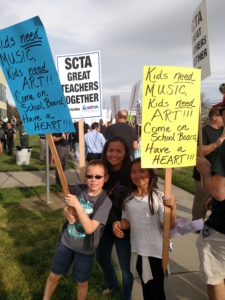 On March 16, the Sacramento City Teacher’s Association picketed in front of the district office. Over 350 teachers, paraprofessionals, students, parents and other members of the community came out to voice their anger over the district’s decision to reject every single one of the Union’s 12 demands for the upcoming school year. Members of the Party for Socialism and Liberation joined in to show their solidarity.

The school board rejected, among others, proposals to reduce class size, extend the arts, music and physical education programs, increase the number of school nurses, psychologists and other professional support staff, and maintain a competitive pay scale for teachers; all while being in the best financial position the district has been in in years. Sacramento City Unified School district is one of the largest in the country serving 43,000 students on 73 campuses. The district is required to keep 2 percent of their annual budget on reserve which equates to about $10 million. The district currently has over $98 million on reserve. The school board is refusing to hire credentialed teachers which could reduce class size. They are refusing to invest in the students of the community.

Sacramento is the most diverse city in California. Students come from incredibly diverse racial, socio-economic, cultural and linguistic backgrounds. Sixty-eight percent of the students in the district receive reduced cost or free lunch. It is a Safe Haven district which provides students protections against the racist immigration policies of the current and past administrations. But in order for the district to provide for these students, classrooms need to be filled with quality teachers, who have access to resources for their students. Instead the district is choosing to pay $75,000 to their negotiating lawyer every two months, while increasing administrative staff by 41 percent.

The evening started with a picket line in front of the Serna Center, the main office for the school board and a symbol for mismanaged funds which could have been spent on teachers and students. The sidewalk swelled to several hundred participants before the event was even scheduled to start at 5 pm. The SCTA handed out signs with slogans like “SCTA Great Teachers Together” and “Recruit, Retain, Respect.” Families with small children joined in on chants of “Hey, hey, ho, ho union power’s here to go!” Cars driving by on busy 47th Avenue honked their horns in solidarity with the crowds. After about an hour the picket signs were traded in (no picket signs are allowed in the building) for smaller brightly colored signs reading such things as “Students need early intervention,” “Students need lower class sizes!” and so on. The president of SCTA, Nikki Milevsky, addressed the crowd and reiterated what the union was fighting for. Then we went inside.

Milevsky stood in front of the board listing the demands the union had made. After each one was read all in attendance shouted “Rejected!” while holding their signs. It was a powerful moment with hundreds in the audience shedding light on the ludicrous actions the board had taken. One by one teachers, parents, members of the community, and students voiced their concerns about the course the district was taking. Cries of “Let him speak!” rose from the crowd as the school board president attempted to talk over a teacher who was breaking apart their flimsy budgetary argument.

As a negotiating team member of the SCTA took the stage and firmly said to the board; “If you reject these demands I am telling you, publicly, we will strike!” the crowd erupted into a resounding applause. It was clear the community stood firmly with the SCTA against the district’s damaging rejections. “If we show strength now, we can show the district that we know what we’re talking about, and that we are willing to do what it takes to fight for our students.  If we show strength now, we can deter the district from playing chicken with a strike.  I don’t want to strike.  I want to get it done and done right.  If that means a strike, then I’ll do so, fully-committed.  But it’s literally the last thing I want to do.” said Damian Harmony, the Latin teacher at John F Kennedy High School and a union rep. “The students stand to be hurt the most, the more the district continues its operating in idiotic bad faith.  They are driving teachers away in droves. Moreover they continue to hurt students by refusing to lower class sizes.”

Politically, we are dealing with one of, if not the most, anti-public education administrations we have ever seen in this country. With the election of Betsy Devos to Secretary of Education our public education system will be attacked on all fronts damaging students prospective educational futures most of all. Our public schools, and the programs that stem from them, are essential to our community’s successes. It will always be the schools in the lowest income areas which are attacked first with budget cuts, program elimination and termination of educators and professional support staff. It is therefore vital that we stand with our teachers, students and their families to defend our schools from these attacks. Only when we have a system which stands to defend the rights of the poor and working class people will we have the opportunity for teachers to truly be the inspiring educators they are for our students. But we can’t just sit back and wait for socialism, we must struggle with our communities to protect the gains we have made!