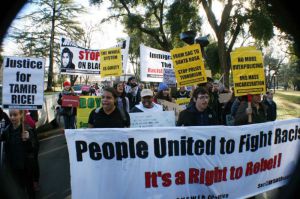 In this month of Martin Luther King Jr. Day, we recognize the achievements made during the civil rights struggle. However, we also recognize that Black people are murdered by the police and white supremacists more than ever. The previous struggle for civil rights has evolved into a struggle for human rights. Across this country, these human rights are denied to Black and Brown people on a regular basis. The racism that has become an integral part of the American capitalist system means that all expressions of culture besides the plastic “American” corporate consumer culture are marginalized and discouraged.

Although it is true that progress has been made away from the more savage expressions of racism, it is clear from the subtle racism of today that you cannot legislate racism out of the United States. Communities of color were never fully desegregated, leaving these communities to be part of neighborhoods that suffer from a severe lack of resources and investment on a systematic basis. Black and Brown communities remain intentionally under-served by local, state and federal governments while they are over-represented in the prison system. The so-called equality in the eyes of the law that was fought for was arguably won on paper but left unenforced in our communities where police don’t uphold the law, they stand above it. The cops that gun down Black people in the streets on a daily basis only to be given a vacation are the same ones, along with their supporters, who stood in opposition to Dr. King in the 1950s and 1960s.

These racists do not want people to remember even the sanitized story of his struggle. King had more than a dream of equality. He also had a vision of how to accomplish that equality. The fight for workers’ rights was what brought him to Memphis on the fateful day that he was murdered with the help of the FBI. He realized that marching alone was not going to accomplish the goals of the movement. Equality was and is still only possible by mobilizing the masses and redirecting their labor towards fulfilling the needs of the community. Only by coming together will we be able to bring about an end to capitalist exploitation in all its forms.

Looking back to move forward As we continue to organize working people, we must look back and honor the legacy of Dr. King and the other freedom fighters who fought with him. But to truly honor Dr. King, one must not only watch his speeches and repeat his slogans but also take up his struggle and push the movement against white supremacy and capitalism forward. “Black Lives Matter” has replaced the Civil Rights era slogan “I Am A Man,” but the spirit of the declaration is unchanged: Black people will not continue to accept being treated like animals in a country that our stolen labor was responsible for building.

In this spirit, the Sacramento ANSWER Coalition organized a contingent of people united to fight racism. Made up of a diverse group of people with messages of “Boycott Driscoll’s,” “Free Palestine” and “It’s a Right to Rebel,” the contingent made its presence known with banners, signs and a sound system. An  attempt by one of the event organizers to block the contingent was overcome, and it marched in unity with the thousands who turned out. Now is not the time for celebration.This is a critical time that demands action. Mass incarceration has developed into a tool of genocide. Gangs are a direct result of criminalization that has been used to divert the energies of the youth away from revolutionary activity. Past leaders of the Black liberation movement struggling for equal rights were murdered in cold blood or put in cages to sit for decades. Concern for the community was replaced with survival instincts that placed the focus on staying alive by any means necessary instead of liberating our minds by any means necessary. Combined with the great displacement of Black people caused by gentrification, the contradictions of capitalism are daily coming into fuller view for many. Over-policing and the militarization of the police is a direct consequence of Black people standing up against these things and asserting their right to life. It is now about human rights instead of just civil rights. We demand the same human rights that were denied to the successors of the Civil Rights movement.

That movement never came to a conclusion although its most vocal leaders were the victims of state terror. It is only from this terror that the current system has been able to last for so long. The events of Ferguson and Baltimore, as well as the numerous communities where police act more like an occupying army than civil servants, show us clearly that resistance is justified. Only from this resistance can we begin to see some change to this murderous system.

In the words of Dr. King:

“We must recognize that we can’t solve our problem now until there is a radical redistribution of economic and political power … this means a revolution of values and other things. We must see now that the evils of racism, economic exploitation and militarism are all tied together … you can’t really get rid of one without getting rid of the others … the whole structure of American life must be changed. America is a hypocritical nation and we must put our own house in order.”