On May 14 organizers with Mexicali Resiste, Raices Sin Fronteras, Workers World Party and the Party for Socialism and Liberation gathered outside the Mexican Consulate in downtown San Diego to protest the unjust detention of political prisoner Leon Fierro and the exploitation of the people of Mexicali by the ruthless corporation Constellation Brands.

Constellation Brands produces popular beers such as Modelo, Pacifico, Corona, Victoria, and Ballast Point. This transnational corporations, with revenue over $6 billion, is currently in the process of building a factory in Mexicali to produce beer for consumption in the United States. In order to brew this beer, Constellation plans on using the region’s groundwater, an already precious and scarce resource in this desert area. In order to produce the beer they export to the United States for profit, it takes nearly three litres of water per litre of beer manufactured. This blatant disregard for the local people of Mexicali was green-lighted by the government of Baja California under governor Francisco Vega de Lamadrid aka “Kiko Vega.”

Organizers in Mexicali Resiste have been been mobilizing since 2017 to combat the construction of this factory. The region is already experiencing a prolonged drought and a depressed water table, with farmers and others already facing water shortages. It is in this climate that Leon Fierro was targeted for organizing against Constellation Brands, culminating in his arrest on the morning of May 3. Leon Fierro, an engineering professor in Mexicali, was falsely imprisoned on charges of attempted murder after using his vehicle to block police from assaulting protesters at a protest on the Mena Ranch near Constellation’s brewery site. After undergoing a grueling 14 hour appearance in court where evidence was presented that directly contradicted the false charges, Leon Fierro is still a political prisoner in Baja California.

Outside the Mexican consulate, speakers took turns condemning the government of Baja California and Constellation Brands for valuing profits more than human lives. They spoke of the destruction to the environment that was sure to follow the construction of the factory, and the impact it would have on local farmers and citizens that depend on the aquifer for drinking water. Organizer Alex Ortigoza from Raices Sin Fronteras and members of the SD Light Brigade etched Leon Fierro’s face onto the sidewalk outside the consulate in chalk, offering a beautiful image of resistance to Constellation Brands. Organizers gathered signatures for a petition to boycott Constellation Brands, and made plans to come together soon in solidarity with the people of Mexicali. Water is a human right, not a commodity to be marketed to Americans at the expense of the people of Mexicali. 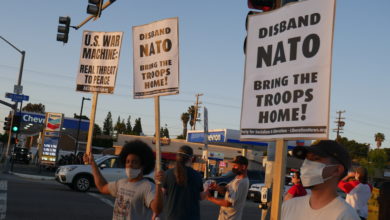