On July 12, the Coalition to Close the Concentration Camps San Diego hosted a rally, march and vigil near the border in protest of those seeking asylum in the United States being held in concentration camps. Many local organizations came out to participate in this action, including Border Angels, Brown Berets de Aztlán, San Diego Tenants Union, People Over Profits SD, Democratic Socialists of America and the Party for Socialism and Liberation San Diego.

The march began with a rally at Larsen Field  in San Ysidro, California. During that time, organizers presented an “artivist” art installation created by children involved in the protest. There were other children’s activities; the event was described as “peaceful and family-oriented,” a chance for people of all ages to fight back against the xenophobic injustices committed by the U.S. government.

Organizers noted the ties between the ways in which asylum seekers are being treated now, and how Native children were also held captive by the U.S. government. In recognition of that, and the fact that San Diego is located on Kumeyaay land, elders from the Kumeyaay Nation and Bird-singers presented a welcome and blessing ceremony as a way to set the march into motion.

By the time the march started, thousands of protesters filled the field, located just a half mile away from the U.S./ Mexico border. Protesters chanted “Close the camps,” and “Money for jobs and education, not for racist deportations!”  as they paraded through the streets of San Ysidro.

As the first half of the march came to a halt, members of Lights for Liberty distributed candles throughout the crowd to start the vigil. On a bridge overlooking the sea of protesters, organizers began voicing their demands for justice. While many spoke about the horrific conditions migrants face in concentration camps at the border as a result of policies put in place by the Trump administration, PSL member Juliana Musheyev provided an analysis as to why there is a refugee crisis in the first place:

“It seems like for many people living in Latin America there are two options for the life that you lead due to American imperialism. Either your government stands up to U.S. domination–like the governments of Cuba and Venezuela–and the people of those countries get punished with sanctions and economic warfare. Or your government is a puppet of the U.S., in which case the economic policies that result create the kinds of conditions that force people to flee or live in destitution.”

Many organizers in San Diego recognize that the concentration camps at the border are not unique to Trump’s presidency, and throughout the march noted the imprisonment of the most vulnerable people– including Native and Black people–has historical precedent. As marchers walked back to the park from where it started, they were greeted with cheers from onlookers and drivers honking their horns in solidarity. 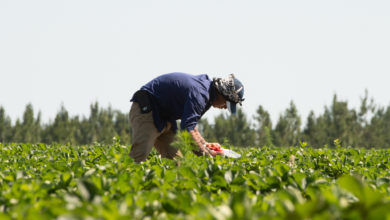 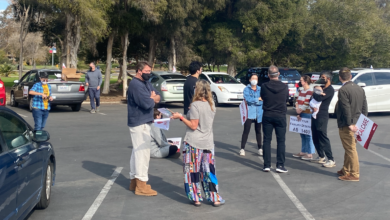