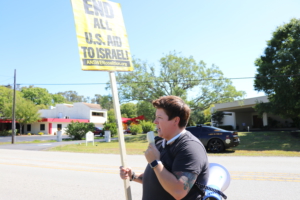 On Sunday, March 18, a small but vociferous contingent gathered across from Temple Emanu-El in Sarasota, Florida, to denounce the pinkwashing talk “LGBTQ Life in Israel” by Israeli emissary Maor Ben-Aire, who was using stories about LGBTQ rights in Israel and the Israel Defense Forces to attempt to paint Israel as a progressive, inclusive state.

“Pinkwashing” refers to ruling-class efforts to cover up their crimes with progressive, pro-LGBTQ imagery and rhetoric, most notably in Israel. This tactic by Israeli Zionists is being resorted to in desperation as more American Jews, particularly young, progressive Jews, increasingly question Israel’s atrocities against Palestinians. 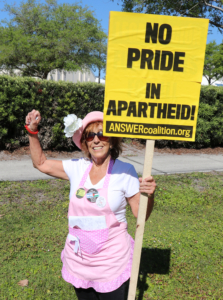 The Sarasota protesters were having none of such hiding brutal colonialism beneath the rainbow. Lined up facing attendees at the talk was a plethora of signs demanding “Free Palestine”, “End All Aid to Israel” and asserting there is “No Pride in Apartheid”.

Liberation News spoke with one of the protesters, New College student Elijah Williams, who declared that as a “queer person of Jewish descent I had to come out against using queer identification to conceal apartheid.”

Israa, a talented and spirited drummer from Tampa, also identifies as part of the queer community and who, having grown up in the Middle East, understands what the Palestinian people are suffering. She said that of her many Palestinian friends, those who were queer have fled knowing that Israel’s shallow pro-LGBT stance is a distraction from the Israeli occupation and not an example of real human rights.

For two hours in the South Florida sun, protesters, led by Ruth, an ANSWER Coalition member, and lead PSL organizer Juliana Musheyev, fervently chanted “Free, Free Palestine” and “From the River to the Sea, Palestine Will Be Free”. 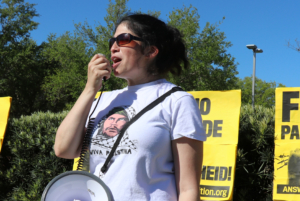 At the close of the demonstration, Juliana, who identifies as a proud member of the Jewish people and as part of the LGBTQ community, spoke of the suffering of the people of Gaza at the hands of Israel and how important it is to both support the Boycott, Divestment and Sanction (BDS) movement begun in Palestine which has gained such momentum internationally and to challenge the attempted cover-up of atrocities by Israel in Palestine using the LGBTQ community. “Not in my name,” she declared emotionally.

To learn more about Israel pinkwashing and the global movement to promote queer-powered calls against it, see: http://www.pinkwatchingisrael.com/