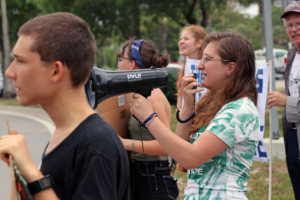 On Friday, June 7, Sarasota students and supporters held a rally at the bayfront to demand action on climate change. The action was part of a month of “summer climate strikes” by Sarasota Students for Climate.

Ella Mirman, a rising junior at Booker High School and founding member of Sarasota Students for Climate, spoke to Liberation News: “We are here today standing in solidarity with the #FridaysforFuture movement, which is a youth-led movement to demand climate action. The Fridays for Future movement is actually a global initiative that started rolling around last fall of 2018 when a student in Sweden, Greta Thunberg, stopped going to school on the demand that she shouldn’t be learning for a future that will be severely devastated by climate change. And it sparked a global movement of millions of students leaving school to demand climate action.”

Mirman learned of Thunberg’s activism early on and started following her story closely. As more and more students started to follow Thunberg’s lead, Mirman felt inspired. The organization she founded, Sarasota Students for Climate, is a group of local students who are trying to incite change in Sarasota and hope to grow and motivate other students in Florida to do the same.

Julia Weber, a recent graduate from Riverview High School, was also inspired by Greta Thunberg and the #FridaysforFuture movement. Weber was impressed by how Greta Thunberg in Sweden took inspiration from seeing students in Parkland, Florida, organize the March for Our Lives movement against gun violence in 2018. Weber told Liberation: ‘Albert Einstein said that ‘Those who have the privilege to know, have the duty to act.’ I’m not plagued by the climate crisis every day, but there are so many people on this planet that are, as far as natural disasters go, as far as the inability to have access to so many resources. I have such a duty being someone who is living with all these resources around me. I think it’s so important that people in the richer part of the world understand the conflict that we are making because of our consumptive lifestyles.”

The rally’s youngest activist, 9-year-old Elysiah, held a hand-drawn sign that showed Earth melting with the words “My future…” Elysiah’s mother and brother were there to support her. Elysiah told Liberation: “I’m out here because of climate change. I actually came out here because of the school strike by Greta Thunberg. I came out here to support that because our government has the choice to fix this but they haven’t done it yet, and other governments have. Because they’re saying that the climate crisis is so huge already. They’re saying that there’s not going to be any way there’s going to be stable life [if we don’t change our direction] in the next eleven years.”

Zoe Nikirk, a recent Booker graduate who has volunteered at Marie Selby Botanical Gardens in Sarasota since she was nine, also spoke to Liberation News: “There’s a lot of countries that have already started converting to mostly solar and renewable energy sources. The amount of fossil fuels that we’re burning is destroying the environment completely. The way that we use our energy is one of the main issues. The food industry, the power grid, transportation needs to change. Everything. “We’re already seeing the impacts—the weather changes, the continuous variations in El Niño down south, all that’s from climate change. There’s dead zones out in the Gulf of Mexico from pollution. Everything is at stake at this point. Ice sheets miles deep are going to be lost irreversibly from climate change in two or three years, and once they start to melt the whole sea level will rise an incredible amount. Everything we have in Sarasota will be completely gone if we don’t do anything about it. Coast lines will be ruined.”

Besides the occasional blast of smog from an oversized pickup truck, students received a continuous show of support from drivers, who honked and waved enthusiastically. It was clear that the climate crisis is a serious issue on people’s minds.

Sarasota Students for Climate will be holding a school strike for climate every Friday in June at the bay front at 3:30pm. They are calling on students to join their movement to demand immediate action on the climate crisis. You can follow them on social media and email them at [email protected]

Liberation asked Ella Mirman whether she felt more hopeful or worried about the climate crisis. 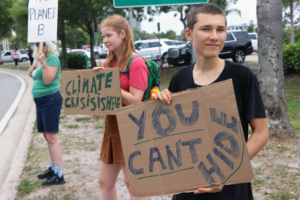 “I actually have suffered severely from climate anxiety. Eco-anxiety has just been proved to be a leading cause of anxiety in teens because we are seeing all of the destruction and pollution that’s going into our home and all of the impacts that it’s having. In that sense, I’ve definitely broken down a lot in fear and terror of what is happening to my home and future, but I have to hold on to that flicker of hope that people will listen and start acting, like, now.”