On Friday, 50 students and community members gathered at the Unconditional Surrender statue by Sarasota’s bayfront and marched over the Ringling Bridge to urge action on the global climate crisis. Students have been striking in Sarasota now since March.

“Today is a global strike day,” said Ella Mirman, founder of Sarasota Students 4 Climate. “Youth all around the world are striking from school to put pressure on COP25, which is the Conference of Parties happening from the UN where they’re deciding what kinds of climate action will occur globally in the next few years.”

“I hope that policies will be passed where countries determine to take immediate climate action, where First World countries and developed nations will over-compensate for lack of action. I hope that many leaders of nations will decide that we need to keep the earth cooler than 1.5 degrees Celsius instead of letting it warm over 2 degrees Celsius.”

Currently thousands of people are protesting in the streets of Madrid outside the COP25, where negotiations around meeting the 2016 Paris Agreement are failing to take the drastic measures necessary to address climate change, according to scientists. Organizers estimate that 500,000 people have taken part in the massive marches and demonstrations.

Greta Thunberg, the 16-year-old Swedish activist who started the global school strike for the climate, spoke to the crowd: “World leaders have gathered here in Madrid to negotiate our future. And I can tell you: The hope is not within the walls of the COP25; the hope is out here with you….The current world leaders are betraying us, and we will not let that happen anymore.”

Liberation News spoke to several of the activists organizing Sarasota’s school strikes for the climate, also known as Fridays for Future. “There’s only ten or eleven years until climate change is irreversible so we must gather as many people as we can and talk to our government and speak to people at COP25 and make sure our future is protectable,” said Sadie Chawkins.

Chawkins created the organization Stop Toxic Ocean Pollution and also works with Sarasota Students 4 Climate. She traces her climate activism back to when she was four years old and saw a plastic toy floating in the ocean at the beach. When she asked her mother what would happen to the toy, her mother explained that it would be stuck in the ocean until someone did something about it.

“We have to go to schools, we have to go to places where there are a bunch of people and just mass educate people about what’s going on. I find that a lot of people don’t know about this issue or they underestimate the exact effects of what’s going on,” said Chawkins. “We need to get big groups involved so the system can be changed.”

Liberation also spoke to Moriya White. White says she did not understand the gravity of the climate crisis until she started talking with Mirman and others outside of her family—who are climate deniers. Vegan and wearing shoes made of recycled ocean plastic, White is too young to vote but decided she had to take a lead role in the climate movement.

“I feel like people who are having issues trying to comprehend climate change, you need to start at a lower level. At first I couldn’t even really comprehend it. You need to start believing, number one, there is an issue, we are effecting climate change, we are producing more unnatural emissions than the earth would naturally, and it’s causing huge issues,” said White. “In order to help somebody believe that this could really bring about the destruction of our earth, we need to look at individual ecosystems beginning to collapse, because if they’re beginning to collapse, what do you think will happen to the rest of it? Those are the foundations. The permafrost is melting; more methane is being released into our atmosphere; the polar ice caps, they are melting; our seas are becoming drastically warmer percentage-wise than they ever have in the growth of temperatures ever; coral reefs in the oceans are being bleached by this effect; we are destroying forests, so that is contributing to the lack of our ability to get rid of C02 emissions,” she said.

Christiana Guan is an activist with Sarasota Students 4 Climate and Sarasota Environmental Alliance, a student-led environmental group that is currently taking on the lack of recycling in Sarasota County Schools. Although she was always an environmentalist, Guan became more involved in high school when the climate movement got a lot bigger and more youth-led with organizations like Earth Uprising and Zero Hour.

“I think we need to take more drastic political action, as in more restrictions on the amount of emissions being produced and also other materials. We need more plastic preemptions, more policies in that direction towards banning certain things that aren’t good for the environment and that we can live without,” said Guan.

“I think a big issue is that there is a big economic influence [on governments] with a lot of companies that are benefitting off of pollution and all these environmental problems,” she said. “They have a lot of influence and that’s preventing and discouraging governments from enacting climate action.”

Liberation also spoke with Karen Willey, who works in climate change communication. She founded Around the Bend Nature Tours, which has educated students in Manatee and Sarasota counties about environmental sustainability and native ecosystems for 20 years. Around the Bend hosts field trips to the grass flats of Sarasota Bay, Oscar Sherer State Park, Myakka River State Park and other local sites.

“There’s a lot of science out there that shows that we can do this,” said Willey. “There are simple solutions to the climate crisis, we just need to get the right people in charge to move things forward. Grassroots activism and raising awareness is the only way it’s going to change.” 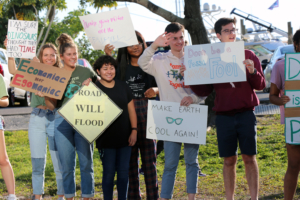 Willey has seen how environmental education allowed young students to grow into ecologically conscious teenagers over the years. She recognized some of the students at Friday’s climate strike from Sarasota Bay Guardians, a volunteer-based effort to reverse a decades-long decline in the health of Sarasota Bay and its watershed.

“The kids give me hope,” said Willey. “These kids, with the knowledge that they have of the environment, know that their future depends on making the right decisions now.”