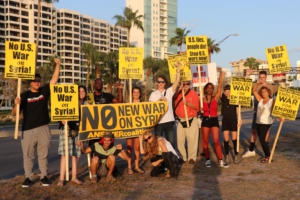 As the U.S.-led coalition has increased its aggression against the Syrian government on the grounds of its accusation that President Bashar al-Assad used chemical weapons on his own people—an accusation for which it has yet to provide any evidence—the ANSWER Coalition has stepped up its anti-war efforts with emergency protests held across the nation.

In Sarasota, on Friday, April 13, activists gathered in front of the city’s landmark “Unconditional Surrender” statue, a symbol of the return of armed forces from wars abroad, in an anti-war demonstration organized by the Suncoast branch of the ANSWER Coalition and Party for Socialism and Liberation, to demonstrate their opposition to endless wars in the Middle East and support for the Syrian people in their struggle against imperialism.

Protesters lined the roadside of U.S. Highway 41 at a busy intersection, holding aloft signs, chanting anti-war slogans, and waving at passing cars as drivers honked their support. Afterward, the points of unity of the Hands Off Syria Coalition, to which the ANSWER Coalition is a signatory, were read to the gathered protesters.

The demonstration concluded with a speech delivered by Steven Keshishian, a student-activist with the West Florida chapter of Million Hoodies, a nationwide anti-racism organization. Keshishian spoke about his experiences as an ethnically Armenian, Lebanese-American student: “Growing up, back home, you live this every day. You don’t know when the next bomb is dropping, when the next war is happening.” 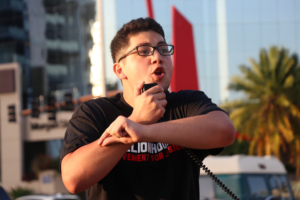 Keshishian refuted the chemical weapons accusation against the Syrian government, stating, “There are no chemical weapons in Syria. Assad removed them all in 2014. Trump is using this to start a war to keep himself in office.” He also framed the aggression in the context of imperialism. “The U.S. war on Syria is not about chemical weapons — that is a lie. The U.S. war on Syria is about power and capitalism.” He went on to assert, “[The U.S.] wants to turn every Arab state into a U.S. puppet state. Nations like Libya and Syria who protest get destroyed.”

The protesters could not have known that within an hour after the anti-war demonstration in Sarasota ended, the U.S., U.K., and France illegally bombed Damascus, Syria in a joint assault.

The next morning, Saturday, April 14, another anti-war demonstration took place outside the entrance to MacDill Air Force Base, which houses U.S. Central Command, in which protesters also showed their support for the Syrian people against imperialism. People entering and exiting the military base, most of whom are active duty members of the U.S. military, could not help but witness the demonstration. 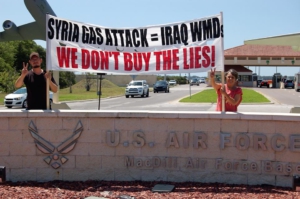 An enormous banner read, “Syria gas attack = Iraq WMDs. We don’t buy the lies!” Chants such as, “They say more war. We say no war!” and “Hands off Syria!” continued throughout. Despite the location of the event, some passersby expressed support for the demonstration by honking or shouting their agreement as they drove past.

Lola Whitworth, a student at New College of Florida, who attended both the Sarasota and Tampa anti-war demonstrations, said she was motivated by the urgency of the situation to take action. “Before the protests I honestly didn’t know that much about the situation in Syria,” she said. After being inspired to use the resources available to her as a college student, “I went home and started educating myself more in depth about the situation [so that] I’d be able to communicate to others why they should stand with Syria.”

By that next morning, in Tampa, the intent of the Trump administration, to escalate the situation and prolong the war on Syria, was more blatant than ever before. Tens of millions of Americans are against further wars in the Middle East, and thousands of people across the nation have expressed their opposition to the war in demonstrations in the week leading up to and in the time since the bombing of Damascus by NATO forces.

We know from recent history, especially from the horrific examples of Iraq and Libya, that as the legitimate government of Syria continues to secure final victory in the civil war, the United States and its imperialist axis will only increase the intensity of its aggression. We must, therefore, continue to oppose this axis and its wars from our position within the core of imperialism.