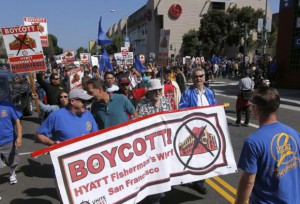 UNITE HERE Locals 2 and 19 marked Labor Day with sizable actions at Hyatt hotels in San Francisco and Santa Clara, Calif., that have refused a fair process for their workers to choose a union.

Several hundred Hyatt workers and union and community supporters marched from San Francisco’s Pier 39 to the Hyatt Fisherman’s Wharf hotel Sept. 1. A dozen unions, along with many community organizations, came out to support Local 2’s efforts over the past six years to represent the Hyatt workers.

Tourists in the area, as well as hotel guests, were treated to loud chants, such as: “All you people, tell the story! Tell the whole damn world, this is union territory!”

Among the unions represented were the International Longshore and Warehouse Union; the South Bay’s Local 393, Plumbers, Steamfitters and Refrigeration Fitters; and University Professional and Technical Employees CWA, Local 9119. 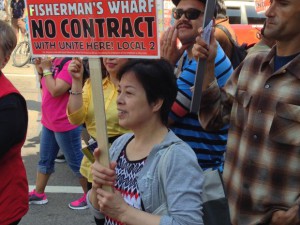 “We have been struggling for many years to have a fair process where the workers can select a union, free of intimidation,” said Local 2 President Mike Casey, pointing out that close to 95 percent of the hotels in San Francisco are now under contract or close to a settlement.

Arturo Marquez, a cook at San Francisco’s Hotel Vitale for nine years, said that he was more than happy to spend part of his Labor Day marching for the rights of his fellow hotel workers. “Almost everybody has a family to support,” he said. “We want everybody to have the same [right to a union].”

Nearly 50 workers and their union and community supporters picketed the Hyatt Regency in Santa Clara on Sept. 4. On this occasion, the union picket occupied both sides of the main entrance to the hotel. Previously, a group of anti-union workers encouraged by hotel bosses had demonstrated opposite the union picket line, holding banners and signs with statements such as “Proud to work at the Hyatt” and “No to a union.” This time the scabs were nowhere to be seen.

The pickets kept up loud chants throughout the action, including “Don’t check in, check out!” and “One day longer, the boycott is getting stronger.” Union activists offered fliers to arriving guests to explain what the boycott was about and giving examples of what the mostly Latina and Filipina women workers have experienced on the job at the hands of Hyatt bosses in the absence of a union, including abusive and embarrassing images posted in work areas and then firing on trumped up charges the workers who protested.

Another example cited was taking away long-handled tools, forcing workers to clean bathrooms on their knees until worker protests won the tools back. Excessive workloads, low wages, and lack of respect motivated workers to organize for a fair and neutral process to form a union starting in 2008.

The following contributed to this article: Jon Britton, Paul Greenberg and Susan Muysenberg.