More than 500 people took to the streets of the Mission district on March 30 to march and rally in solidarity with the Palestinian people.

The action coincided with the one-year anniversary of the Great March of Return movement in the Gaza Strip. This  movement has rallied against the illegally constructed Israeli wall every Friday for the last 52 weeks, demanding the right of return of the displaced Palestinian people to their homes.

Abedelal told the crowd, “We can no longer count on elected officials to demand justice for our people. It is through grassroots movements like this one that apartheid was ended in South Africa. It was the people who demanded the end to the Jim Crow era. It is us that will demand the end of the occupation of Palestine. It is people protesting on the border of Gaza who will demand an end to the siege of Gaza.”

A short list of speakers made connections between different struggles of colonialism occupation and resistance from Palestine to the native struggle in the United States to the resistance of the Venezuelan people to the destabilizing plans of U.S. imperialism. 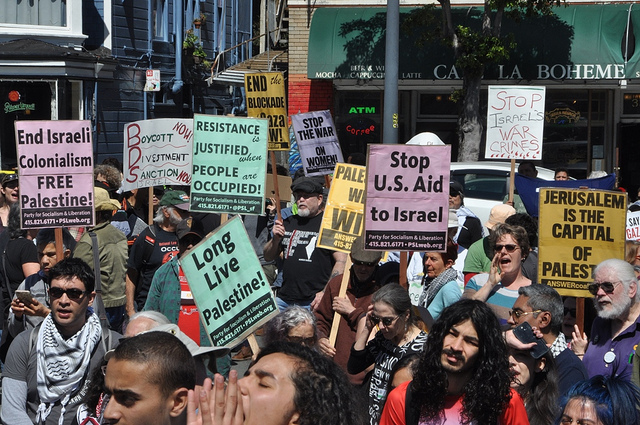 Sharif Zakout, an organizer with AROC, explained, “We are now in the 71st year of this occupation– 71 years of displacement, imprisonment, death, surveillance and trauma that has impacted families on every inch of this world. Today marks the first year anniversary of the ongoing Great March of Return by Palestinians in Gaza who are demanding the right of return to the homes from which they were displaced. It is also the 43rd anniversary of land day or  Yūm al-ʾArḍ that not only marks a past event but a new moment for Palestinians to think about creative and resilient ways to further resist Israeli land theft.” Rising his fist, he closed with,  “We are going to keep fighting until all of our people are liberated from oppression globally. All power to the people! Long live Gaza! Long live Palestine! Long live international solidarity!

Erika Hidalgo of the ANSWER Coalition (Act Now to Stop War and End Racism) added, “The ANSWER Coalition stands uncompromisingly with the Palestinian people not only in their struggle to survive a brutal occupation and genocide at the hands of the Israeli state, but also in their heroic struggle to return to their rightful land, land that is unmistakably Palestine. And we stand in solidarity, whatever shape the fight for Palestine’s liberation may take.

“Both the U.S. and Israel are white supremacist, settler-colonies that thrive off the theft of land, and exploitation and murder of indigenous people. The U.S. spends billions of dollars funding Israel’s brutality, and then sells us the story that providing us here with healthcare or housing is just not feasible. It’s not easy to resist this system of oppression, but we take strength and inspiration from the Palestinian people who, against the most horrific violence, have been fighting this and refusing to give up for 71 years!”

With the chant, “Free free Palestine, Let Gaza Live,” the emcees started calling on people to take to the street in the solidarity great Mall to return in San Francisco. The spirited solidarity protest marched down Mission Street with chants from the crowd bouncing off the buildings on each side of the street.

People came out of the stores and the buildings showing solidarity with the  chants of “From Iraq to Palestine, occupation is a crime,” “Let Gaza Live,” “1,2,3,4 we don’t want you are racist war, 5,6,7,8, Israel is a terrorist state,” “End, End the occupation, “Free Free Palestine,” “From Palestine to Mexico, these border walls have got to go.”

The March passed through Clarion Alley, where the walls of the buildings have been transformed into a mural landscape of progressive, radical and peoples art reflecting struggles from Palestine to Mexico ,  and against police brutality, displacement and gentrification.

The demonstration ended at Dolores Park where people held up kites which have become a symbol of the resistance in the Great March of Return in Gaza.