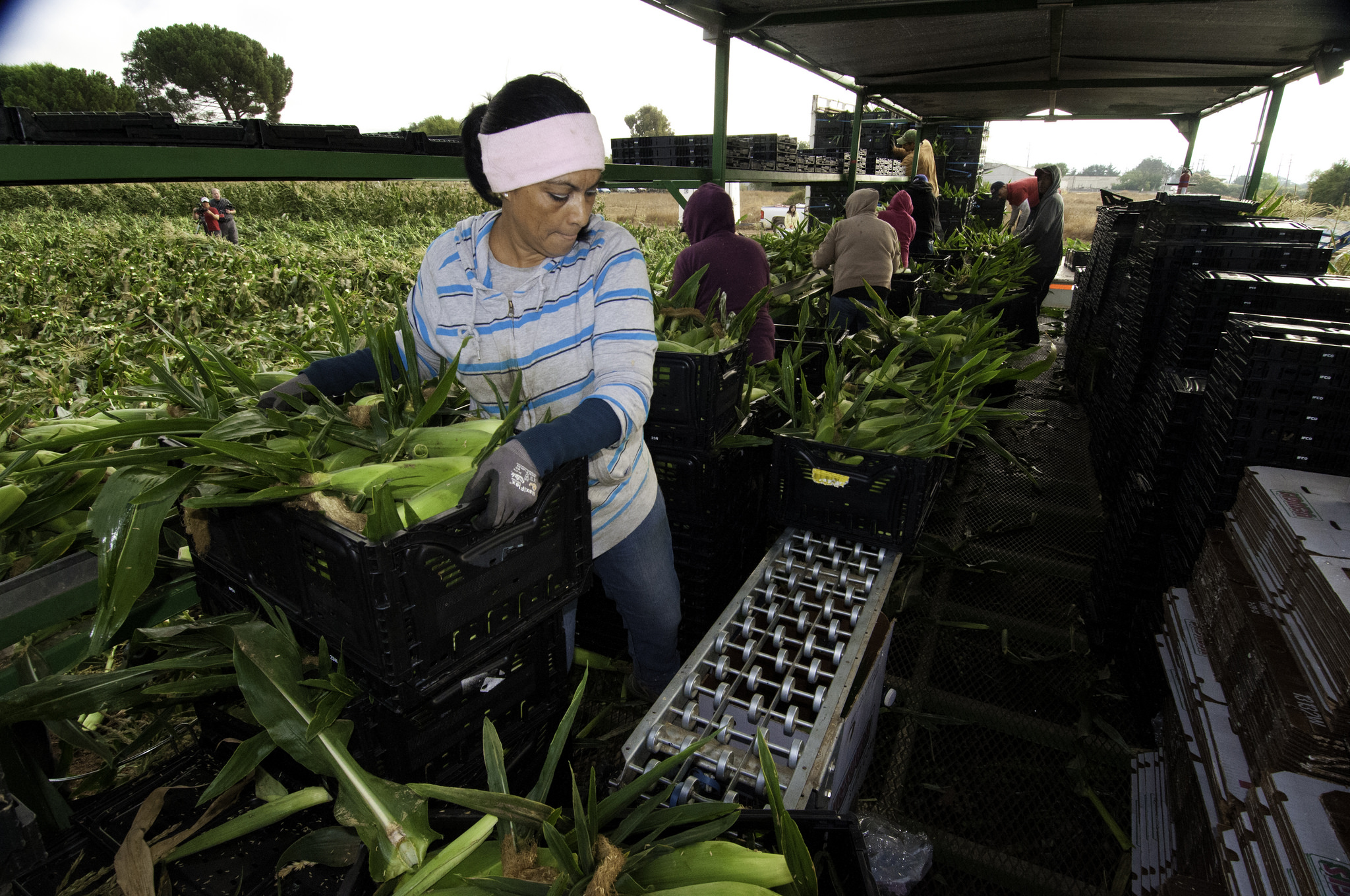 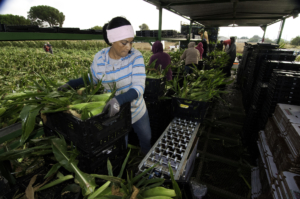 When you bite into a tomato, are you that sure it was picked in a field where the women workers were protected from sexual harassment and rape? The Coalition of Immokalee Workers wants us to ask ourselves this question. Public awareness and pressure is part of their successful campaign to get tomato farms in the U.S. and Mexico to adopt Fair Food Agreements. These agreements include codes against sexual harassment.

Their work is much needed. Many women farmworkers see sexual harassment and even sexual assaults as a danger they must tolerate for a day’s pay. Women working in the fields are 10 times more likely than other workers to experience sexual assault and harassment at work. Eighty percent of the 700,000 women who work in the fields and packing sheds across the U.S. have been subjected to some form of sexual harassment.

According to a recent PBS documentary this abuse, including violent rape of women by foremen and supervisors with the complicity of farm owners, has been going on for generations. Monica Ramirez, President of the  Alianza Nacional De Campesinas, explained that  sexual violence  is “ so common that farmworker women refer to the fields as “green motels” and “fields of panties.” Her group fights for social, environmental, and economic justice, and violence prevention for farmworker women and their families.

Harvest Without Violence, The CIW Women’s Group’s campaign has been successful in getting individual tomato farms in the U.S. and Mexico to adopt codes against sexual harassment and Fair Food Agreements that address wages and working conditions. Their tools?  Signing on the companies that buy tomatos as well as the farms that grow them. Companies agree to pay a penny more a pound for tomatoes if the farms will adopt an agreement and anti-harassment measures.  The CIW relies heavily on public education so that consumers will exert pressure on the food outlets to back better conditions for farmworkers.

The CIW is currently fighting to end sexual harassment in the fields with a boycott of Wendy’s. When this fast food chain’s longtime tomato suppliers in Florida joined the Fair Food Program, Wendy’s stopped buying their tomatoes and turned to a farm in Mexico without worker protections. The 4-month-old boycott is part of the CIW’s “Harvest without Violence” campaign to end sexual violence in Wendy’s supply chain.

CIW says that, by appealing to the public and targeting food retailers as well as the farms, it has won Fair Food Agreements with 14 multi-billion dollar food retailers, including Walmart, Ahold USA, McDonald’s, Subway, Trader Joe’s, Whole Foods,and Compass Group. These food giants require a human-rights-based Code of Conduct to be implemented on the farms that grow their tomatoes. Tomato farms along the East coast from Florida to New Jersey have signed onto the Fair Food Program.

The gains made for by CIW for campesinas are impressive, but the gains are only in tomato fields, and only those on the East Coast.  Much more is needed.

Giant agribusinesses make billions off the super-exploitation of poor mostly immigrant women and men who work for them in the fields and packing houses. Campesinas are regularly paid below minimum wage and cheated from their wages–$11,000 a year, compared to $16,000 a year made by their male counterparts, according to Ramirez. “Sickness and birth defects are common, as they are frequently exposed to toxic pesticides and denied adequate safety equipment. In addition, Latina farmworkers may be grabbed, hit, or beaten for not meeting a supervisor’s unrealistic expectations.”

They have little protection, as federal laws guaranteeing the right to organize, minimum wage, work breaks, 8 your days, overtime, sick time, vacation pay, and safety on the job do not apply to them.

During the New Deal era, agricultural and domestic workers were excluded from nearly all of the  protections guaranteed by the Fair Labor Standards Act  and other federal employment protections. This exclusion was a concession by Washington to southern capitalists. It allowed their continued super-exploitation of black workers, almost all of whom worked as either domestics or worked in the fields at that time.

Today, these jobs are still done by people of color, many of them undocumented immigrants. Agricultural workers are still not covered by the National Labor Relations Act and do not have collective bargaining rights, except in California,where this right was won through hard struggle.

Campesinas picking crops in the U.S. on guest worker visas have even less protection. In New York State, for example, immigrant women here on H2Ar visas to harvest crops have their legal presence tied to a particular farm and sometimes to a particular farmer. If this farmer is an abuser, reporting the abuse can mean withdrawal of sponsorship and deportation.

Then there are the more than 60 percent of farmworkers who are undocumented who have no legal rights at all.

Efforts to guarantee rights to farmworkers on a state-by-state basis, a tactic used with some success by domestic workers, faces more difficulties for those working in agriculture. For example New York, a big farm state,  passed a Domestic Bill of Rights. But the Farmworker Fair Labor Practices Act, which would grant toilers in the field collective bargaining rights, workers’ compensation, unemployment benefits, an 8 hours work day and at least 24 consecutive hours of rest each week, has been locked in committee for years.  It is opposed by the Farm Bureau, arm of the multi-billion dollar agribusiness in that state.

The American Farm Bureau Federation, which represent giant agribusinesses spent more than $ 97 million on lobbying last year, at least in part to oppose better working conditions on their farms.

Since 1995, however, field workers who work on farms with more than 15 workers have been covered by the Equal Employment Opportunities commission. This government body can sue for damages related to rape, harassment or assault, but cannot bring civil charges.

‘Rape in the Fields’ documentary

The 2013 Public Broadcasting documentary “Rape in the Fields” covers several EEOC suits, and provides examples of the harrowing and dangerous situations that campesinas across the country report as widespread.

Harris Farms, one of the largest agribusinesses in the U.S., was ordered to pay $994,000 in a suit filed by the EEOC on behalf of Olivia Tamayo. The jury found Harris Farms liable for sexual harassment, retaliation and the punitive termination of Tamayo. Tamayo testified that her supervisor forcibly raped her several times. He also subjected her to continuous verbal sexual harassment and intimidation. Tamayo said, “For a long time, I remained silent about what my supervisor did and said to me. He carried a gun and a knife…the company failed to protect me, let me work alone in the fields, and instead punished me with a suspension.”

DeCoster Farms settled a federal discrimination lawsuit for $1.5 million  filed on behalf of 11 Latinas, five of whom said they were raped, and six sexually harassed while working at four of the company’s egg plants in North Iowa. The lawsuit claimed that the women were raped by supervisors who threatened to have them fired or killed if they did not submit. DeCoster Farms  paid the money, but did not admit liability.

Monetary settlements have been won by sexually harassed and raped workers.   Since the EEOC has no power to prosecute, however, giant agribusinesses generally regard these settlements to raped and abused women and girls as just part of the cost of doing business, and let the abuse continue.

Meanwhile, not one of the rapists and abusers named in the EEOC suits has been prosecuted and convicted, according to PBS, even in the cases were campesinas won hefty financial compensation from their employers for creating and maintaining a work environment hostile to and dangerous for women. In fact, the victim who reports the assault is the person most likely to feel the consequences. Often the women are fired.  Filing a complaint with local police can be dangerous. These cops more often than not act as agents of agribusinesses, and deport many women who have the courage to speak out.

The EEOC has long been overworked, with backlog of 73,508 complaints in fiscal 2016.  At a time when sexual harassment claims are expected to rise, Trump has cut EEOC staff.

The vulnerability of campesinas to sexual assault also results from discriminatory immigration laws that threaten them and their families, and from a racist judicial system which often prosecutes the victim.

In the first 100 days of the Trump administration, 41,000 immigrants were arrested, an increase of 40 percent from 2016. In addition to tearing families apart and separating mothers and children, immigration enforcement is rife with sexual abuse of women by local, immigration, customs and Border Patrol police.

ICE stalks courthouses, hospitals and health care facilities, childcare centers, public housing and other locations where immigrant women may seek services.  Immigrant women are targeted for sexual violence by local cops who use the threat of deportation to prey on them. One Los Angeles study found that a quarter of Latina transwomen surveyed, the majority of whom were undocumented, reported sexual assault by law enforcement agents.

Giant U.S. multinational corporations, including agribusinesses, cross national borders at whim, forcing people in other countries off their land, destroying residential neighborhoods and driving wages down.  But when workers come to the U.S. out of desperation, they are treated as criminals and subjected to the worst abuse. This horrible exploitation needs to be brought to public attention, exposed and roundly denounced.

Immigrant undocumented women who work in agriculture, as domestics, and in other jobs, need and deserve immediate support and solidarity from every sector of the population.   There is an old labor slogan, “An injury to one is an injury to all.”  It would be most effective for workers’ organizations and trade unions to unequivocally take on the plight of these workers, including their right to be in the U.S., to organize, to safety on the job and to have labor legislation extended to them. The corporations respect no borders. There can be no borders in the workers’ struggle.